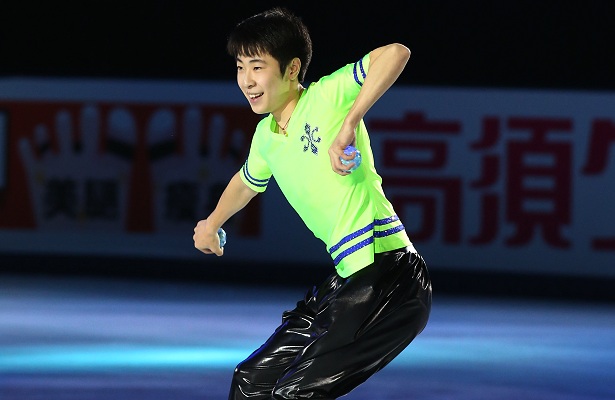 Over this past summer, China’s Boyang Jin was excited to learn that the Chinese Skating Association decided to move him up to the senior circuit and assign him to two senior Grand Prix (GP): Cup of China and NHK Trophy.

In order to compete against the top skaters in the world, Jin and his coaching team soon established a strategy, which was to keep both his short and long programs from last season while upgrading the difficulty of the layouts and polishing his footwork. They also added Jin’s biggest weapon—the quadruple Lutz—into both routines.

Jin first tested out the plan at the qualification competition for the Chinese National Winter Games in September. At the event, he stunned the Chinese audience by landing all of the six quads planned in his two programs, including two in combination. After the event, the home crowd placed more expectation on him to perform well at future international competitions, and the reigning Chinese national champion did not disappoint.

On November 6, at the Capital Stadium in Beijing, China, Jin made his official debut on the international senior circuit. Skating to the music of “Tango Amore,” the 18-year-old opened his short program by beautifully landing a huge quad Lutz-triple toe, and then followed up by nailing a triple Axel and a quad toe, executing all level four spins and steps. The home crowd erupted when Jin’s score of 90.05 points was announced. However, Jin himself was not 100 percent satisfied.

“The landing of the triple Axel and the quad toe were a bit shaky, which I can do better in training,” explained the student of Zhaoxiao Xu and Caishu Fu. “This was my first time competing in the senior Grand Prix, and I was skating in front of the home audience, so I felt a bit more nervous than I usually do. Anyway, I think I performed almost everything I could do.”

In the free skate in second place, despite a fall on the following quad Salchow and some weak landings, the Harbin native executed every other planned difficult element including a colossal quad Lutz and another two quad toes. He was rewarded 171.18 for the free program, and placed second behind reigning world champion, Javier Fernandez of Spain.

The new Cup of China silver medalist was no completely satisfied with his performance.

“I think I only performed 60 to 70 percent of what I can do,” said the 2015 World Junior silver medalist. “I look forward to improving my consistency through upcoming competitions, and making progress step by step.”

Three weeks later in Nagano, Japan, he again delivered a close to flawless short program at the NHK Trophy, and refreshed his personal best by 95.64 points. The next day, Jin once again challenged the four-quad long program, but this time he popped a quad toe into a double and stumbled in a few other jumps. Nevertheless, the 170.79 points he received were good enough to put him in second place in the segment and the event overall, behind Olympic champion Yuzuru Hanyu who smashed the records in both segments.

With two silver medals from the GP events, the three-time Junior Grand Prix (JGP) Finalist made it to the senior Final held in Barcelona, Spain, in the second week of December. There, Jin finished third in the short program, but a fall on the solo triple Axel and a few other shaking landings, as well as some signs of exhaustion in performance, were only able to put him in fifth place in the free skate and overall in a highly competitive field.

“I don’t think I was nervous, but maybe I lacked a bit of concentration,” he admitted. “I didn’t push myself hard enough.”

In retrospect to his first senior season on the international stage thus far, the 2013 Junior Grand Prix Final champion considered it was not too different from junior competitions.

“I’ve been to the JGP Final several times which were held at the same venue as the senior GP Final,” said Jin. “I was able to sense what it felt like to compete at the senior level and how the audience reacts, therefore I didn’t feel overwhelmed despite this being my first year at the senior level.”

However, the result he achieved so far was out of his expectation.

“Before the GP series started, I didn’t set any specific goal,” Jin revealed. “This is only my first senior season and all I want to do is to perform the best I can. To finish second in both events was really a surprise to me.”

After the GP series, most elite Chinese skaters decided to skip the Chinese Nationals in the final week of December to have a good rest and prepare for the upcoming national Winter Games in January which is considered the most important domestic event of this season. However, Jin went on to compete at nationals, and was crowned the champion for the third consecutive time with a total score of 276.12.

Later on January 29, the three-time Chinese champion went to Ürümqi—the capital of the Xinjiang Uyghur Autonomous Region—where everyone, including Jin, was suffering from the altitude of 1650 meters. He needed to use an inhaler for oxygen in order to compete at the national Winter Games, which is held only every four years. Nevertheless, he performed well, landing every jump in both programs and scored 87.34 in the short and 196.62 in the free to win the gold.

“This is probably my best performance so far this season,” Jin commented after the free skate, “but it is still a bit regrettable because I can land the jumps better in training. I need to further improve in upcoming competitions.”

Jin was assigned to the Four Continents Championships and will very likely get a spot on the World team as well. The young skater is well aware of his shortage, especially in the program components, compared to that of the some of the best skaters in the world he will be competing against.

“I think a four-quad program is good enough for me even when we look into the next Olympics,” Jin acknowledged. “On top of jump consistency, what I must improve is my skating skills and presentation. I have much to work on all five components.”

The Harbin native revealed that besides daily training, he is taking ballet and Jazz dance classes once or twice a week to improve his artistry. He also likes to watch dance videos and tries to learn the body movements. Even at competitions, he seizes chances to learn from senior skaters during official practices.

“In a high level competition like the GP, all skaters in the second group are the best in the world,” Jin noted. “They are experienced veterans and better all-rounded skaters than me. I think I can improve my overall package by learning from them.”

However, compared to last season, Jin feels that while he has made some visible improvement in his presentation, his jumps stand out more.

“People may notice this unbalance,” pointed out the 18-year-old. “I can do the most difficult jump in the world, but I am well aware of what I lack. I will continue to work hard and improve my skating skills, to address the details in performance, and do the best I can in competitions.”