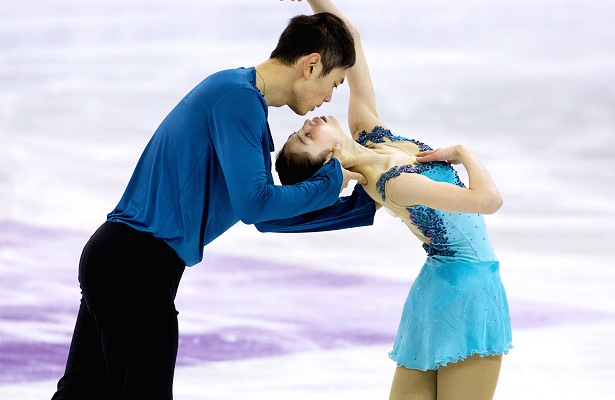 Xiaoyu Yu and Yang Jin of China perform their Free Skate at the 2015-16 ISU Grand Prix Final in Barcelona, Spain.

For China’s Xiaoyu Yu and Yang Jin, the 2015-16 figure skating season is a year for refinement. The two-time World Junior champions graduated from junior level, moving up to seniors, with the goal to establish themselves as one of the top pairs in the world. However, they were not satisfied after their three Grand Prix events performances.

The team competed at Cup of China held in Beijing, China—the city where Yu was born and raised—the first week of November. In the free skate, the reigning silver medalists from last year surprised many when they attempted a throw quadruple Salchow, however, Yu fell on the landing and received an under-rotation call.

“We are feeling good these days, so we want to challenge,” recalled Yu. “I just regret that we missed the throw quad Salchow because our landing rate in training was quite good.”

In a competitive field which included teammates Wenjing Sui and Cong Han, as well as Russia’s Yuko Kavaguti and Alexander Smirnov, the young team came away with the bronze medal—a lower placement than last year.

Three weeks later in Nagano, Japan, the reigning bronze medalists from last season attempted the throw quad Salchow. While the rotation was full, Yu still fell again. Nevertheless, they executed every other element in both short and free programs well, except for a popped double Axel in the free skate. They were third after the short, but moved up to second overall behind Canada’s Meagan Duhamel and Eric Radford to capture the silver.

“I think we did better in the latter part of the (free) program,” said Yu. “Other than the quad throw, we changed some steps for transitions in our program. We think it is important to have more beautiful transitions and moves.”

With two podium finishes, Yu and Jin made it to the Grand Prix Final in Barcelona, Spain, for the second year in a row. This time, their goals were to gain more experience and hope for a break-through despite the fact they were not feeling “in good shape” and “did not adapt to the ice well.”

In Barcelona, they still decided to go for difficulty and attempted the quad throw again. Like before, Yu fell on the element, and the overall quality of the performances were not as ideal as the skaters wanted them to be. As a result, they ended up with a second consecutive fifth place finish.

“I think that’s maybe because that we were focusing too much on the competition,” said Jin. “It’s something we need to work on. After falling, there’s definitely a change to the spirit and mindset. The excitement comes down for a little, but we need to adjust quickly and do the best on the rest of the elements. For us there’s especially a lot to improve on our performance part, the choreography and the step sequence.”

In retrospect to the first half of the season, the students of Hongbo Zhao felt that they had not improved enough compared to last year.

“Our first goal for this season is to further refine and polish both of our programs, to skate more beautifully than last year, and increase the difficulty,” said Yu.

It was the main reason why they decided to keep both programs from last season. David Wilson choreographed both routines—”Yulunga (Spirit Dance)” by the Dead Can Dance for the short, and “Humility and Love” from the Creation soundtrack for the long.

“We’ve discussed with our coach the pros and cons of recycling the programs,” Jin shared. “Surely the judges may like a fresh program, but the benefit for us to use the same program is that we are already familiar with the choreography, and therefore we can focus on improving our execution—both technically and artistically.”

However, they feel what they’ve done is still not good enough in the eyes of the judges, and as a result, their second mark has remained the same as last year. Receiving these results, the team who trains in Beijing felt the urgency to go back to the basics and practice skating skills.

“Our coach kept urging us to practice skating and presenting every day in training, but the component score we received in the Final is a wake-up call,” Jin pointed out. “We got the lowest among all seven pairs, so clearly the judges are telling us that we have big problems to fix. We are now focusing on strengthening our skating foundation and thus the five components.”

Zhao, their coach and former Olympic champion, has been coaching the youngsters since the summer of 2013. The two-time Chinese champions certainly feel the privilege to be their childhood idol’s students.

“When I was little, I was afraid of him because I thought he was a very great skater,” recalled Yu. “What he said must be right. Later, I realized that he really cares about us very much, and he gives us suggestions to every detail. Although he is looking over four top pairs in China, he really spends a lot of time and effort on us.”

Zhao’s partner, both on ice and off ice, Xue Shen, is now an officer in Chinese Skating Association. However, she also does some coaching from time to time.

“Although she is very busy, coach Shen always comes to see us training whenever she has time,” Jin noted, “especially on the choreography. She sometimes would show us how to perform the moves more artistically together with coach Zhao. Whatever they do looks so fluent and beautiful, as if it is choreographed for them instead of us. They will always be our idols to look up to.”

Yu and Jin also look to judges for advice and feedback after every competition.

“Regarding our current free program, some judges, especially those from Europe and America, consider it a beautiful piece; but some judges tell us it is quite flat, without excitement,” Jin shared. “With the problems raised, we need to learn and practice how to create the waves and excitement through our presentation in training.”

As the second half of the season is upon them, Yu and Jin are seeking refinement of the program components as well as technical improvement.

“Our biggest change this season is adding a throw quad in the free,” said Yu. “We didn’t execute it well in competitions so far, but we are landing it in training and want to improve our consistency.”

With many of the top pairs in the world doing quad throws and difficult side-by-side jumping passes, the team is also suggesting the possibility of upgrading layout difficulty.

“We have quite good landing rates of side-by-side triple Salchows, and a more difficult jump combination,” Yu revealed, “but the first priority right now is still to land the throw quad consistently.”

“The throw quad really consumes a lot of energy, so it was difficult for us to add two new difficult elements,” Jin added, “but when we can land the new jumps more consistently, we may put it in our program.”

As for the quad twist, which Chinese pairs are known for, Yu revealed that they may try it next season.

“First things first,” she said. “There were too many problems exposed during the Grand Prix series.”

“There are many competitions coming in the next few weeks and we need to be very focused in training, and tackle them one by one,” Jin summed up.

In mid-January, Yu’s leg was accidentally cut by a blade. She received stitches and was unable to resume training less than one week before the 2016 Chinese National Winter Games. Although the injury clearly impacted their performance, especially on the jumps which Yu fell twice, the two-time world junior champions won the junior event overall with a total score of 177.62.

“Our performance was far from what we can do,” said Yu. “Especially in the second half of the program; we could barely hang on due to stamina.”

“Despite the challenge, we still decided to go for difficult elements like the side-by-side triple toe, and Yu handled the pressure very well,” Jin added. “I think she was really great.”

Their next competition will be this week in Taipei City, Chinese Taipei, at the upcoming 2016 Four Continents Figure Skating Championships.

“Firstly, we need to further improve our consistency and quality,” Jin said, in regards to the upcoming Four Continents. “Then we want to continue to challenge the throw quad. We want to do the best we can and achieve good results at Worlds.”