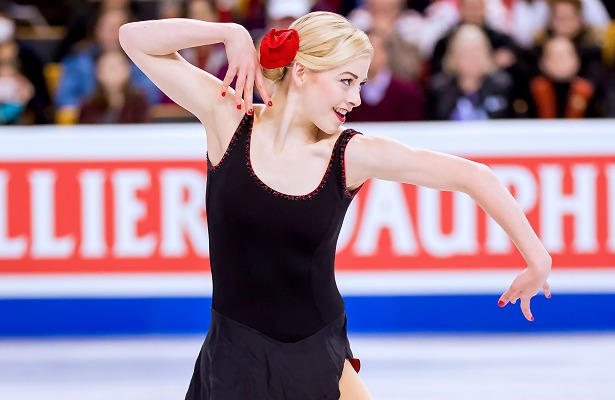 USA’s Gracie Gold currently leads the Ladies event at the 2016 World Figure Skating Championships after a series of sensational short programs by the top athletes. Anna Pogorilaya of Russia is in second, followed by teammate Evgenia Medvedeva, while USA’s Ashley Wagner is in a close fourth.

“We’re only half way through, but I am kind of seeing the light at the end of the tunnel and that maybe the drought is ending, which would be amazing,” said Gold of the USA’s absence from the World Championships medal podium since 2006. And with good reason.

The U.S. National champion skated her playful Spanish “El Chocio” routine with panache. The program included a sturdy triple Lutz-triple toe loop combination covering significant ice distance, as well as a triple flip out of footwork and double Axel. Swept up in the exhilaration of the skate, the audience was applauding throughout Gold’s footwork sequence.

The exceptional skate generated an emphatic yell by Gold at the end of the program. While the edge on the triple flip was not clear, she was awarded a level four for two spins and footwork, and earned a personal best of 76.43.

“I really felt great out there. I just felt calm and welcome,” said the 20-year-old. “This was an amazing crowd. I guess I wasn’t expecting it. Everywhere I go from Starbucks to the doorman at security, everyone has been so supportive. It just felt right. It just felt cautiously optimistic that it was going to be really good.”

Gold felt “validated” to be ranked first after such a slew of strong ladies’ short program performances.

After a season of hills and valleys, Pogorilaya surprised with an expressive and powerful performance to “Boléro for Violin and Orchestra,” demonstrating impressive calm in the wake of Gold’s spectacular showing. The 17-year-old landed an impressive triple Lutz-triple toe loop combination, triple loop and double Axel to earn 73.98 from the judging panel.

“When I went out, I was very focused and I didn’t think about anything,” said the two-time and current European bronze medalist. “I kept a cool head and I took it one step at a time in the program. I am well-prepared and I expected a strong performance from myself.”

The teen from Moscow told the press she was “happy for 50 percent because the free skate is still to come” but that it was too early to “celebrate.”

Medvedeva’s dominance in ladies figure skating this season has been put on the back burner – at least for the short program – in Boston. The Russian champion delivered a lyrical angst-filled routine to Schwartz’s “Melodies of the White Nights,” but had a shaky triple flip.

“When you miss one element, the one you want to do the combination with, you get tense because you need to switch your mindset and do another combination that you haven’t trained so much,” she later explained. “You have to fight and you cannot make mistakes.”

And fight she did. The quick-minded skater omitted the planned triple toe in the combination and instead tacked it onto her triple loop. She also landed a double Axel with her ever-common arm over her head. The judges awarded the program with a score of 73.76.

“All competitions are important to me,” the 16-year-old said of her senior worlds debut. “However, when I stepped out and saw the full stands and the spectators so close to the ice, I realized that this is a big stage.”

Wagner ensured Gold would not be the only U.S. lady to challenge for a medal in Boston. This season’s Skate Canada champion skated her scintillating “Hip Hip Chin Chin” program to enormous fanfare. The provocative routine included a confident triple flip-triple toe combination, double Axel and triple loop for a personal best score of 73.16. It was a satisfying performance for a skater rarely able to muster a clean short program at big meets, including the last U.S. Nationals, Grand Prix Final and World Championships.

“I’m so excited to finally get over that hump of the short program at Worlds,” the 24-year-old said, overjoyed. “That’s money for me,” she said of the inconsistent triple-triple combination. “As soon as I get that first jump out of the way, I get the feel of the ice and I knew that as long as I didn’t get too far ahead of myself, the rest would happen.”

“I know it doesn’t sound PC (politically correct), but I don’t need this medal,” the three-time U.S. champion said of the pressure to finish on the World podium. “I need to let myself skate and the rest happens. I have focused too much on placement and medals before and that has gotten me absolutely nowhere.”

Russia’s Elena Radionova skated her melodramatic short program to “Je t’aime” by Lara Fabian and opened with a triple Lutz-triple toe combination that was hard not to love given the skater’s problems with the jumping pass this season. The 17-year-old struggled later, however, to land her triple flip, brushing the ice with her free foot. A clean double Axel completed her jumping elements, and the skater garnered a score of 71.70.

“It was a good performance, accurate and decent,” said the European silver medalist. “I feel I’m in better shape than at Europeans. I’ve trained very well leading up to this.”

Satoko Miyahara’s electrifying “Firedance” number was performed with measured precision as the two-time Japanese champion landed a triple Lutz-triple toe loop combination, triple flip and double Axel. Her score of 70.72 placed her in sixth place and dipped beneath her season’s best given the triple flip received an edge call and under rotation.

“I did not have any large mistakes today which I think is good, but I felt a little nervous on the jumps,” admitted the 18-year-old. “I think my jumps were better in practice, but I felt good about the spins and steps.”

Fan-favorite and three-time world champion Mao Asada of Japan skated her mischievous “Bei Mir Bistu Shein” routine with style, but stepped out of her signature triple Axel. The 25-year-old recovered with a strong triple flip-double loop and a triple loop with a jerky landing. Her expressive footwork sequence had the audience clapping alongside the music. She scored 65.87 from the judges and she sits ninth.

“I am most disappointed that the biggest jump, the triple Axel, was not clean, but I think I did all that I could on everything else,” the 2010 Olympic silver medalist said. “My condition since getting here was not bad, so I thought that I could land it.”

The popular Mirai Nagasu, a late addition to the U.S. ladies team upon the withdraw of U.S. silver medalist Polina Edmunds, was the first of the U.S. ladies to skate and ratcheted the building excitement level with a clean performance of her “Demons” short program. The 23-year-old completed a triple flip-triple toe loop combination—which was later downgraded given the toe loop’s under-rotation, as well as a triple loop and double Axel. The judges awarded the Four Continent silver medalist with a score of 65.74 for 10th place.