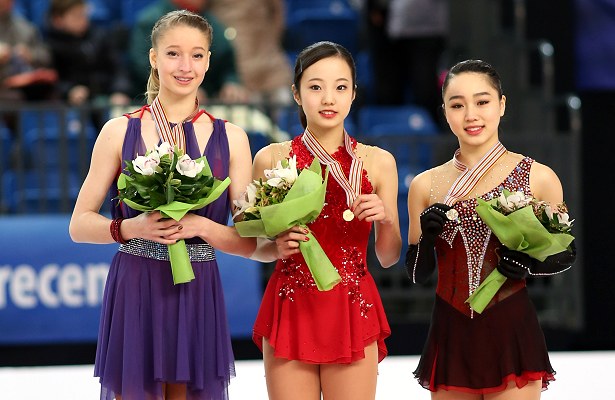 Marin Honda of Japan ended Russia’s golden streak in the Ladies event at the 2016 ISU World Junior Championships in Debrecen, Hungary, when she skated to the title. Russia had won gold—and at least two medals—at every Junior Worlds since 2011. Maria Sotskova of Russia claimed the silver medal and Wakaba Higuchi of Japan moved up from fifth place to repeat as bronze medalist. All three medalists set a new personal best score in the free skating.

However, Russia really was out of luck in Debrecen. Sotskova was the only Russian lady left in the competition after first top favorite Polina Tsurskaya had to withdraw before the short program. Teammate Alisa Fedichkina also withdrew less than an hour before the long program. Both skaters suffered a sprained an ankle in training—Tsurskaya on the ice during the morning practice on Friday and Fedichkina in the gym while preparing for the free skate on Saturday.

Honda was virtually tied with Fedichkina after the short program. Both skaters had performed very well, scoring 66.11 points. The technical score broke the tie in favor of the Russian.

“Before the competition, I was aiming at the podium,” said the ISU Junior Grand Prix Final bronze medalist said. “After the short program, I felt stronger about making the podium. I aim at the World Juniors next year and I’ll concentrate to make it happen.

The Japanese skater added and explained that her biggest challenge of the season was that she didn’t like her music at the beginning. Honda is too young to move up to the senior level next season as she’ll turn only 15 in August.

Skating to Romeo and Juliet, Sotskova pulled off a triple Lutz-triple toe loop combination, a triple flip-single loop-triple Salchow combination and three more triples. She only underrotated a double Axel, but overall she looked not as light and fluid on the ice as Honda. The ISU Junior Grand Prix Final silver medalist earned 123.94 points and 188.72 points overall.

“Coming here I was not in a bad form,” the 15-year-old commented. “You can even say I was well prepared and ready for this event. I was not satisfied with my short program and I wanted to skate clean in the free and give the maximum, but not everything worked out.”

The teen who trains in Moscow most certainly felt pressure due the withdraw of her teammates.

“Alisa fell in the warm up in the gym right in front of my eyes and she couldn’t get up,” Sotskova recalled. “They carried her to the medical room. I was worried for her and I didn’t know whether she would be able to skate or not. Then I learned that she had to withdraw and I realized that I’m the only Russian left in the competition and that I have to skate for my country.”

The dynamic Higuchi stood in fifth place following the short program as she had fallen on her triple Lutz-triple toe combo, but she delivered a strong performance in the free. Her routine to The Mask of Zorro was highlighted by seven triples, including a triple Lutz-triple toe combo and level-four footwork. The 15-year-old scored 125.65 points and moved up to third with 183.73 points overall.

“Before the competition my condition was good,” said the Japanese Junior champion. “Unfortunately, I missed an element in the short program and I was very disappointed. I had some concerns in the free skating about the triple Lutz-triple loop (which she didn’t attempt), but I think I did a good job.”

This was the last junior event for the skater from Tokyo, who has already competed and medaled twice at the senior level at Japanese Nationals. Next season she plans on working harder on her jumps and spins for the senior level.

Yuna Shiraiwa completed a strong result for Japan by coming in fourth. She, too, gave a very good performance that included six clean triples, among them a rare triple Salchow-triple loop combination (171.59 points).

Kazakhstan’s Elizabet Tursynbayeva, considered a medal contender, was ranked only 14th in the short. She not only fell on the triple Lutz, but interrupted her performance due to a bad nosebleed.

“I stopped, because there was blood on my costume and on the ice,” explained the 16-year-old who trains under Brian Orser in Toronto. “I didn’t know that I would get a five-point deduction for the interruption.”

Nevertheless, Tursynbayeva was determined to continue the free skate after the nosebleed was staunched. The student of Brian Orser turned in a clean long with a maximum of seven triples and was ranked fourth in the free skating, moving up to fifth overall (170.83 points).

USA’s Tyler Pierce moved up from seventh to sixth (167.19 points), but teammate Bradie Tennell dropped from fourth to eleventh (143.63 points).