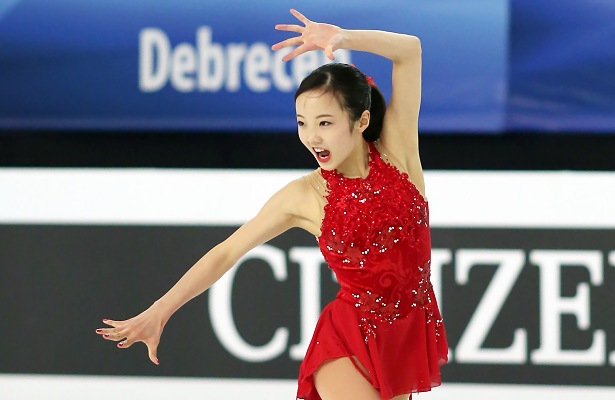 Last month, Japan’s Marin Honda ended Russia’s five-year gold streak at the 2016 ISU World Junior Figure Skating Championships. Although two of the top Russian ladies withdrew due to injury—both with sprained ankles—Honda stepped up to the challenge and claimed the title, beating Russia’s Maria Sotskova. The 14-year-old was the first Japanese junior lady to top the podium since Kanako Murakami, who won in 2010.

Honda won the judges over with her delicate expression and strong skating skills, not to mention her solid jumps. At first, the junior high school student had a hard time believing that she really won.

“I have no strong feelings yet, I still don’t realize yet,” said the teen who trains in Osaka. “Actually, I was only thinking about [getting on the] podium, not to win. Even after the short program, I just thought if two others are better than me, I still can make the podium.”

Honda’s coach, Mie Hamada, feels that Honda has very high potential but is not yet a consistent skater, or even a hard worker.

“Maybe it was a turning point that she was selected for Junior Worlds even though she only finished ninth at Nationals (senior level) and sixth at Junior Nationals,” said Hamada, who has coached Marin for the past six years. “The Federation chose her to go to Junior Worlds.”

The coach informed the young skater that she had a responsibility and that she had to think about another skater who couldn’t go to Junior Worlds.

“If you appreciate to go to Junior Worlds, you have to work hard,” Hamada reasoned. “One month before Junior Worlds, she heard me very well and she was working. One month, and she got the result. I hope she learned that if she works hard she can have nice results.”

The new World Junior Champion comes from a family with a lot of skaters. Four out of five children are skating, and only the oldest sister Maho, a college student, did not go into the sport.

Honda followed her brother into the sport when she was two years old and her younger sisters—Miyu and Sara, 7—also started skating.

However, Miyu, now 11, is also an actress and has played in several TV dramas in Japan and in a music video. An agent had discovered little Miyu when she was still in kindergarten. The talent and love for acting seems to run in the family as Marin Honda is a beautiful performer on the ice and enjoys it.

“It is really nice to skate in front of many people and for a certain time I have all eyes on me,” she admitted, adding with a laugh that she feels like “an actress on ice.”

“Marin has a very cute character, but she is never serious,” Hamada revealed. “Sometimes she skates to Satoko’s (Miyahara’s) short program and tries to copy her. She enjoys that very much. She doesn’t want to do the same thing over and over again. She hates that. Two or three times is enough. She gets bored very easily. Sometimes it is difficult to teach her, but she is a very nice girl. She is never mean.”

“She is friends with Satoko,” said Hamada. “Satoko is a very hard worker. Marin looks at her and says, ‘she is working so hard, but I can’t do that.'”

The coach considers Honda to be the most talented of her siblings. “Her youngest sister also has a talent, but a different type. She is a good jumper, but Marin is a good artist. I don’t want to push her too much, because I want her to feel the music, feel the edge, enjoy the music. I believe this will bring a good result for her,” the coach shared.

Honda, who trains before and after school, enjoys jumping and expressing her feelings most when she is on the ice, and looks up to 2006 Olympic Champion Shizuka Arakawa.

“I watched her performance from the Olympics on Youtube and I really admired her performance and I liked her,” said the 2014-15 Japanese novice silver medalist. “I’ve met Shizuka and she complimented me for trying to express everything to the fingertips.”

“[Honda] can feel the music very well,” added Hamada, who enjoys working with her student.

For Honda, the next season already has already begun. Shortly after Junior Worlds, Jeffrey Buttle, who came for a show to Japan, choreographed a new long program for her to “Romeo and Juliet.”

“She picked the music herself,” Hamada offered.

For the short program, the skater will go to Detroit to work with Marina Zueva.

Honda will not be age-eligible for the international senior circuit as she will only turn 15 in August. Nevertheless, she wants to add more technical difficulty to her program.

“I want to do a triple Lutz-triple toe in my short program in the second half,” she announced.

In Debrecen, Hungary, she did a triple loop-triple toe combo, but the Lutz and the flip are not easy jumps for the World Junior Champion, as she suffers from Hallux valgus, a bunion, on her foot.

“She cannot use the toe very well when she does the flip and Lutz,” revealed Hamada. “It is sometimes hard. She has to do some exercise in order to be strong, to get a strong toe muscle and she is not consistent at all.”

Obviously, Honda also has thought about a triple Axel or even a quad. “During the season I never tried those new jumps, but in the off season I might try the triple Axel or the quad Salchow,” she summed up.