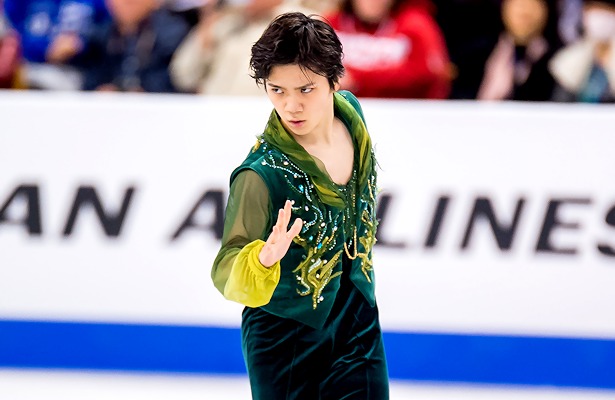 For Japan’s Shoma Uno, the past 2015-16 season was one full of “growth” and “experiences.” The 2015 World Junior champion officially moved up to the senior level, and began the season with a fifth place finish at the U.S. International Figure Skating Classic in mid-September.

The 18-year-old did very well with his debut on the Grand Prix (GP) series, winning a silver medal at Skate America and a gold at Trophée Éric Bompard (based on the short program), qualifying for the GP Final. In Barcelona, Spain, despite a fall in the short program, Uno delivered a nearly clean free skate which resulted in a third place finish overall.

The reason behind such improvement resulted from changes he had made in training and paid more attention to his dietary habits.

“During Skate America, I felt that I lacked a bit of stamina,” Uno revealed, “so I increased the number of run-throughs in training every day and started to do off-ice stamina training. Now, I can do my free skate without feeling tired at the end.”

After repeating a silver medal at Japanese Nationals at the end December, Uno was selected to represent Japan at the 2016 Four Continents Championships and World Championships. In February, the skater placed second after the short program at the Four Continents, but failed to land both of the quad toes in the free skate successfully. As a result, he finished fourth overall, just off the podium.

“I think I lacked the sense of importance,” the skater self-analyzed. “I did not do well in my first competition and left with a lot of regrets. After that, I strongly felt ‘let me show what I can do’ in following competitions. Such feelings were much stronger in the GP Final, but as I gained good results, maybe I started to lose the sense of urgency. So to think positively, I think the failure this time would help me in future competitions.”

One month later, the GP Final bronze medalist competed at his first senior Worlds in Boston, Mass. After a solid short program which put him in fourth place heading into free skate, Uno again failed to cleanly land both of the quad toe jumps and made some other small mistakes in the free. As a result, he finished seventh overall.

“I think the reason I failed this time is that I was not able to control my nerves,” said the skater who trains under Machiko Yamada Mihoko Higuchi. “[It was] different from how I felt in the GP Final. I didn’t think about enjoying the competition at all. I was only thinking about how to do my best (in Boston) and achieve good results.”

In order to do that, Uno told himself that he needed to focus and concentrate, but in hindsight, felt that “forcing” himself to focus caused him to “lose” that focus.

“I worked even harder after the Four Continents to prepare for the Worlds,” the skater continued. “I felt very regrettable that the efforts didn’t pay off, but I believe the way I trained was correct. Now I want to turn the failure at this event into a meaningful experience, continue to work hard, and seek a strong comeback next year.”

Perhaps the strong comeback he was looking for came earlier than he expected. Three weeks later, Uno competed at his final competition this season, the newly established Team Challenge Cup in Spokane, Washington. In the short program, the Nagoya native surprised the world by successfully executing a quadruple flip, becoming the first skater in the world to land this difficult jump in an ISU-sanctioned competition. Moreover, he repeated the same success in the free skate the next day.

“Frankly, it feels good,” Uno told the press after the competition. “This event turned out to be the happiest and most satisfying event for me so far. It gives me confidence heading into next season. Next year, I want to put the quad flip in all of my competitions. I will work hard for that.”

In retrospect of the past season, the rookie considered it a year that felt both “long and short.” He noted how the first year on the senior circuit made him grow both on-ice and off-ice.

“Now I am telling myself that I must work hard,” said Uno. “Despite the failure, I must overcome and become stronger. I must keep moving forward.”

Looking into next season, the 18-year-old wants to increase the level of difficulty, citing, “there is no meaning doing the same thing, so I would like to challenge myself and raise the bar.”

In past season, besides the quad toe and quad flip he already landed in competitions, Uno was observed doing quad Salchows and quad loops in practice sessions.

“For next season, I want to try other types of quads,” he offered, “but as of now, the landing rate of my quad loop is not as good as my flip. Maybe I will do the Salchow, I haven’t decided yet.”

Besides improving technically, Uno also aims to improve his artistry. He chose “Fantasy for Violin and Orchestra” for his new short program and selected music from “Buenos Aires Hora Cero” and “Balada para un loco” for the long program.

“During the off-season, I will spend extra efforts on my performing and skating in training,” said Uno. “I hope that when the new season starts, I can make improvement in these areas.”

In order to do so, the skater from Nagoya will attend some classes in the U.S. until mid-July, including on-ice training and dance classes, and then return to Japan for ice shows.