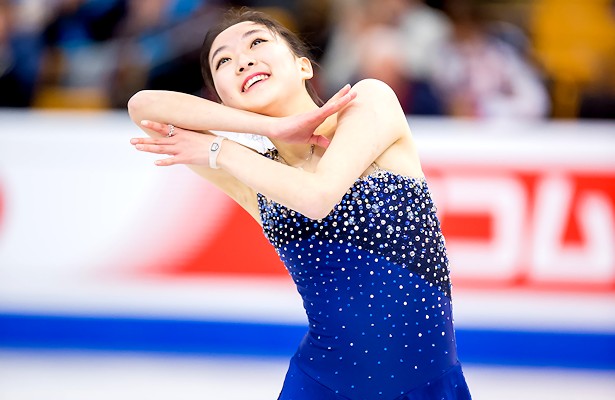 Lack of stamina has been a constant struggle for China’s Zijun Li this past 2015-16 figure skating season. In September 2015, while skating to her free program in the qualification event of the Chinese National Winter Games in Ürümqi, China, she lost consciousness when the program ended and was carried out of the rink by her teammates. This was in part due to the high altitude of the rink which was built on the foothills of the Tian Shan mountains with a elevation of over 5400 feet.

In her later competitions, including the Grand Prix Cup of China and NHK Trophy in November, as well as the Four Continents Championships in February, she was able to pull off a decent short program and finished in the top six each time.

However, the 19-year-old always had difficulty delivering a complete program in the free skate, and especially struggled to execute the elements well in the second half of the program. The skater felt she did “not having any strength and needed to fight to hang on.” As a result, the 2014 Four Continents bronze medalist finished ninth, seventh, and 10th in the events, respectively.

On the first day of March, in order to prepare for the upcoming World Championships in Boston, Mass., the student of Haijun Gao went to Los Angeles, Calif., and started what she referred to as “monster training” under Frank Carroll.

“The training was extremely tough, and I couldn’t follow at all in the first few days,” Li recalled. “There are many run-through practices every day. I always lost my stamina in the second half of the program, and could barely hang on. It was such a suffering for me at the beginning. Every day I felt like my legs were broken and found it difficult even to stand, but Frank was very strict and asked me to carry on.”

After a few days, Li started to feel the difference. “I gradually got used to the pace and didn’t feel so painful after training.”

The result of a full month of “monster training” was displayed at Worlds. In the short program, the skater who finished ninth the previous year, delivered a very strong performance, receiving positive Grades of Execution (GOE) in all her elements, as well as level fours in all her spins and steps. As a result, she was rewarded 65.39 points, a personal best in her career so far.

“I want to give myself full marks on my performance,” the skater commented with a huge smile on her face. “Before the competition, I told myself that this would be my last competition this season and the last time I skate to Claire de Lune. I knew I was very well-prepared. I wasn’t afraid, so I must do the best I could.”

She also felt the huge improvement on her stamina. “After the program, I didn’t feel very tired, and I felt I had plenty of energy left to carry on. It was better than I expected. Now I can be more confident and relaxed for my free skate.”

In her free skate set to the music of The Artist, the four-time Chinese national champion executed all her planned elements, despite a few shaky landings and receiving an edge call on her triple Lutz and an under-rotation on the triple flip. The 119.13 points she received was again her season’s best, however, Li wasn’t satisfied.

“Although I didn’t make any big mistakes and refreshed my season’s best, it wasn’t the best I can do,” she said. “I think my body was a bit tight, and considering what I have been doing in training, I could definitely do better.”

In retrospect of the past season, the skater who finished 11th at Worlds considered it a “personal breakthrough” both physically and mentally.

“Stamina has been my biggest issue this season,” Li addressed. “The month in LA was really exhausting, but I think it was worthy. I realized that I wasn’t training hard enough in the past, but now I know in what areas I should work much harder.”

“I also learned to be more self-driven. Training together with Gracie Gold really motivated me,” Li continued. “She is one of the very top skaters in the world, but she trains really hard and is strict on herself. I was inspired and learned how to improve myself through trainings.”

Looking into next season, improving stamina will continue to be Li’s priority.

“Without good stamina, you cannot pay attention to performing and thus, cannot impress the audience,” noted the skater. “I think my style on the ice is more on the elegant, introverted side instead of high-profile, extroverted side, so it is very important that I continue to strengthen my stamina so as to ensure I have energy left to connect with the audience through my performance.”

The Chinese National Winter Games winner also aims to “bring back” what she used to be able to do before puberty and the stamina issue hit her.

“I need to bring back my triple flip-triple toe combination without under-rotation and I want to try another half loop-triple Salchow combination,” stated Li, adding that she wanted to improve her Lutz. “Next season, I want to regain my best condition and further improve from there.”

To achieve this goal, the skater from Changchun will make a big change in next season. Besides doing choreography and training in Canada with Lori Nichol, the skater, who has been training in Beijing with Chinese national team thus far, will train again under Mingzhu Li in Artesia, Calif. Two-time world champion Qing Pang will also be part of the coaching team.