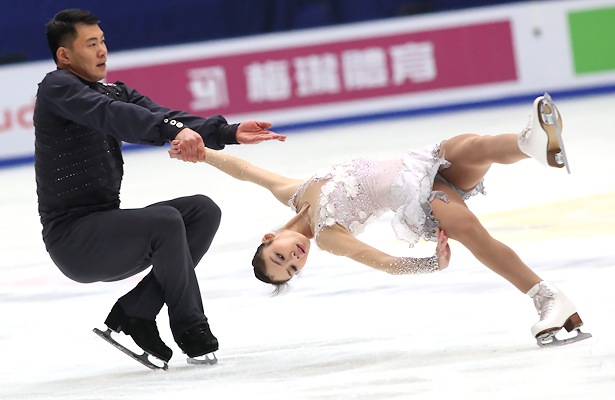 Xiaoyu Yu and Hao Zhang of China perform their long program at 2016 Cup of China.

To the delight of the home crowd, Xiaoyu Yu and Hao Zhang led the Chinese pair to a one-two finish in the 2016 Cup of China in Beijing, winning ahead of their teammates Cheng Peng and Yang Jin. Liubov Ilyushechkina and Dylan Moscovitch of Canada dropped to third to take the bronze.

Both Chinese teams looked good and made few mistakes, despite the fact that they had swapped partners just last spring.

Yu and Zhang took the lead in the short with a strong performance that was highlighted by a triple twist and throw triple loop. In their romantic long program “Cavatina” and “Larghetto Amoroso” by Emil von Sauer, the Skate Canada silver medalists landed a big triple twist, double Axel, throw triple loop and Salchow, but Zhang crashed on the triple toe solo jump. They still won with almost six points to spare and broke the 200-point mark (203.76 points).

“We are very pleased to have won our first Grand Prix gold medal,” Zhang told the press. “However, I made a big mistake on the jump. I think the last time I made that kind of mistake in competition was at the 2010 Olympic Winter Games. Maybe it was the pressure to skate in front of a home crowd or maybe I was not focused enough.”

Peng and Jin had big throws as well, which is typical for Chinese pairs. Their only major mistake came when she stepped out of the side by side triple toe in their program to “The Umbrellas of Cherbourg.”

“This is our first international competition and I think we showed what we do in training,” said Jin. “In our free skating we still had a small mistake on the solo jump, but we got good levels and it shows the approval of the judges.”

Peng and Jin skated clean in the short, and also performed their cute program to “My Drag” very well.

“Lori Nichol choreographed this program for us,” said Jin. “While we were practicing steps, we heard the music playing in the background and we wanted to dance to it right away. So, we asked Lori if we could skate to it and she agreed. It is a cheerful program with humor and acting. We enjoy it very much.”

Ilyushechkina and Moscovitch were second, although he stumbled on the side by side triple toe, however, the other elements were good, especially their throw triple Lutz. Pressure may have gotten to them as the rest of their long program to “When You Say You Love Me” was quite messy. He crashed on a triple Salchow and she singled, and the landings of both the throw triple Lutz and throw triple loop were two-footed. The mistakes added up and the Skate Canada bronze medalists dropped to third.

“It was a rough go for us today,” Moscovitch admitted. “It was unfortunate and disappointing and it wasn’t depicting how we’ve been training and how we’ve been practicing here. The program got kind of broken up by the mistakes.”

Romantic themes seem to be popular among many of the pair teams. Xuehan Wang and Lei Wang of China (fourth), Italy’s Nicole Della Monica and Matteo Guarise (fifth) and Yuko Kavaguti and Alexander Smirnov of Russia (sixth) had picked love stories and romantic themes for their free program.

“I think that pair skating is just very romantic,” Yu explained. “It is the partnership between man and woman and romantic and sad music touches the audience.”

Ilyushechkina agreed: “Romantic music works out well for pair skating. I knew Dylan had this music and wanted to skate to it and I fell in love with it right away.”

Kavaguti and Smirnov started quite well into their “Moonlight Sonata,” but he aborted a lift and singled an Axel, which cost many points. “I don’t know what went wrong with the lift,” said Kavaguti.