“It was the greatest moment of my life,” said Junost skater, Anna Negasheva, when asked about her reaction to their win. “We came a long way. It was difficult, and there was lots of training, lots of crying, and of course some laughter. I don’t know what to say except that it’s unbelievable. It’s unforgettable; It’s perfect.”

After the short program, Junost sat in second place behind their country rivals, Crystal Ice (Team Russia 1). They had narrowly edged out the soon-to-be World Champions by 0.21. Team Fintastic (Team Finland 1) performed a sky-themed program which cast an ethereal spell over the arena, and enough to earn 61.55 heading into Saturday’s free program.

The world title has been a long time coming for Junost. Hailing from Yekaterinburg, Russia, the team has earned over 10 national titles since 2002, and captured the bronze last season at the 2016 Junior World Challenge Cup (JWCC). They closed off the competition on Saturday night with Stravinsky’s “Firebird.” Their whimsical yet powerful free earned them 106.49 points — a 10.77-point lead over second — and a total of 168.83 overall.

Crystal Ice was anticipated to medal, if not win. In a wild turn of events, the young Russian team suffered seven falls in their free program, totaling nine deductions which left them in a disappointing eighth place finish overall. Despite their misfortune, they received a warm applause for a courageous performance; their artistry and speed was not lost on the crowd.

The WJSSC saw its debut in Helsinki, Finland in 2013. Prior to this event, the top junior teams competed at the ISU Junior World Challenge Cups (JWCC), which have taken place in seven different countries since 2001. The two championships alternated for four years, but will be permanently replaced by the WJSSC going forward.

Finland has captured 12 of the 14 titles at ISU Junior World Challenge Cups (JWCC), firmly establishing them as podium hopefuls leading into this event. 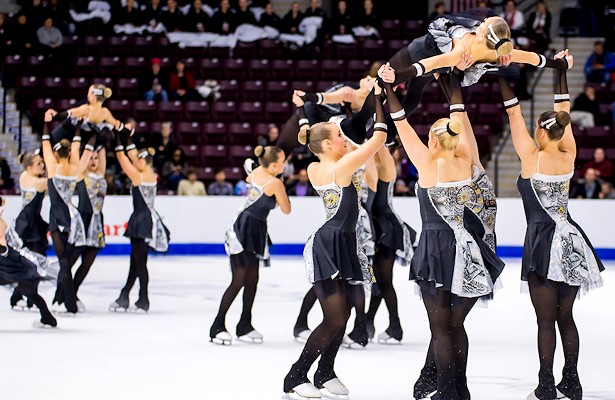 While neither Finnish team finished in the top four in the free program, the short program scores were enough to bump up Team Fintastic from bronze position to silver overall, and Musketeers (Finland 2) from fourth to bronze.

The only other teams to break the Finnish reign are from Canada, with NEXXICE (formerly Ice Image), who took the first title in 2002, and Les Suprêmes (Team Canada 2) in 2016.

As the reigning JWCC champions, Les Suprêmes (Saint-Léonard, Quebec) not only came into this event to defend their title, but to do it on home ice in Canada. After two falls in the short program, the team was in sixth position heading into the free.

“We treated the free program as a new day,” said Les Suprêmes co-captain, Alessia Arsenault. “We didn’t change our recipe; we did what we had planned in practice.” 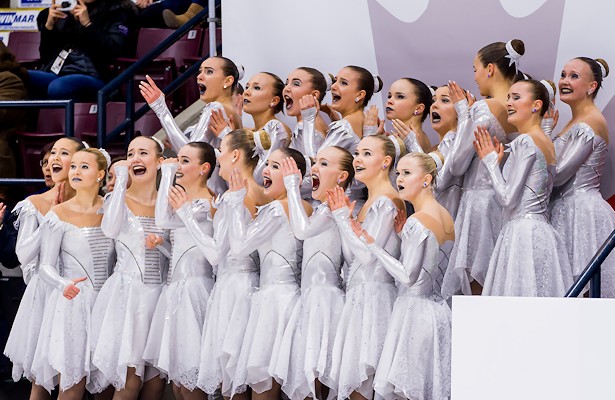 When asked to describe their program, Les Suprêmes co-captain, Marie-Ève Deschênes explained their mission. “At the beginning it’s serious. We’re chasing and getting chased during the no-hold and then we arrive in a special place where our enemy is.”

“Our wheel is a [favorite] moment for us since we can directly see each other and make eye contact,” said Arsenault. “In the story of our program, the wheel is the party,” added Deschênes.

Les Suprêmes finished fourth in the free and sixth overall, while Burlington, Ontario’s NEXXICE (Team Canada 1) moved up from seventh after the short to take bronze in the free and fifth overall.

NEXXICE team member, Emiko Marr explained how their schedule had intensified this year in preparation for the World Championships in their backyard.

“We first heard our short program music in April and the program run-throughs and cardio started sooner than in other seasons,” said Marr. “The New England Challenge Cup in October helped us determine early on what we needed to change in our programs. We also practiced with crowd noise [leading up to the event], which gave us more confidence.”

To deal with the pressure, Marr explained that coach Trish Perdue-Mills acted as the team’s mental coach as much as their skating coach.

“We did our warm up at the hotel, a number of focus activities at the arena and stood in the stands to experience the cheering before we came on,” said Marr. “Going into the short and the free, Trish told us, ‘[this weekend is] not life or death. If something happens, the sun is still going to rise; life still continues,” said Marr. “It made us settle our nerves and helped us rebound faster [after the short].”

Many, if not most of the NEXXICE and Les Suprêmes skaters grew up competing in the Hershey Centre, which hosts the largest Canadian synchronized skating competition each year in early January.

“The arena really felt like home,” said Marr. “We practiced a lot here leading up to the event.”

Despite the familiarity, there are always elements of surprise.

“We were prepared for the noise, but it was louder than I thought,” Arsenault explained. “It was fun to see the Canadian flags everywhere,” added co-captain, Deschênes.

Finishing second in the free skate and fourth overall, the Skyliners (Team USA 1) also felt a closer connection to home while competing in Mississauga.

“It was nice not having the time change,” said Skyliners skater, Kelsey Bialo. “We had a lot of family and friends here, and more than anything, it gave us the confidence we needed. I don’t think we were nervous at all.”

Similar to the Canadians, mental training is also very much ingrained in Skyliners warmup routine.

“Our coach is all about focus, so when we’re in the locker room, we play the music and walk through the program,” said Bialo. “We let the music fill ourselves, so we can present that feeling outwards [on the ice].”

While Russia, Finland, USA and Canada have dominated the top eight positions at these championships, there are a number of teams that travelled as far as Australia to compete this weekend.

Majestic Ice (Team Australia) skaters, Jessica Aird and Judy Herbert explained that although synchronized skating is thriving in Australia, there is still a long way to go before it becomes a common household sport.

“When you say, ‘I skate synchro’, people think, ‘oh so there’s two of you?’ No, there’s sixteen of us,” said Herbert. “You have to build it up; It’s a long conversation.”

“A lot of people think of us as the life of the party and not competition [material],” Aird added. “We’ve proven otherwise.”

While the Australian Figure Skating Association has been very supportive of synchro, the sport is still expensive and largely unknown.

“We do some team funding activities, like Bunnings Sausage Sizzles,” said Aird. “Bunnings is like a big Home Depot; it’s an Aussie staple. You set up a tent and you put your sausages on a roll and sell them. It raises awareness of the sport, team and of course money to fund our season.”

Golden Roses (Team Turkey) also traveled from across the world to make their debut at the WJSSC this season.

“We’re from three different cities in Turkey, so it’s difficult to come together for practices,” said Golden Roses skater, Eylül Yaras. “Some of us are from Ankora, so sometimes we train there [and] take flights or a bus.”

When asked if cost was an obstacle, Yaras explained this isn’t the case.

“We are financially supported by the government,” said Yaras. “We [only] pay for plane and bus tickets, but that’s nothing compared to the other things.”

While the team is composed of mostly current and or former singles skaters, they are still learning the ropes. Yaras said the funding is helping fill this knowledge and experience gap.

“Half of the skaters that are here would not be able to come otherwise,” said Yaras. “As figure skaters, we were good at skating individually, so it was difficult to come together. But this process was much easier with financial support.”

Although they have a long way to go before they can break into the top 10 on the world stage, their current training program has set them up on a successful path to move them up in the rankings.

“We do four or five days of training each week with fitness and off ice,” said Yaras. “Though we cannot do this every week, when we do, it’s about five hours per day.”

As a former competitive singles skater, Yaras said there is no comparison when it comes to dedication.

“I can tell you this. As individuals, you don’t have that much pressure,” she said. “You do what you need to do for yourself. As a team, it’s more difficult [to come together]. It’s always better because you have sixteen people that can share the feeling.”