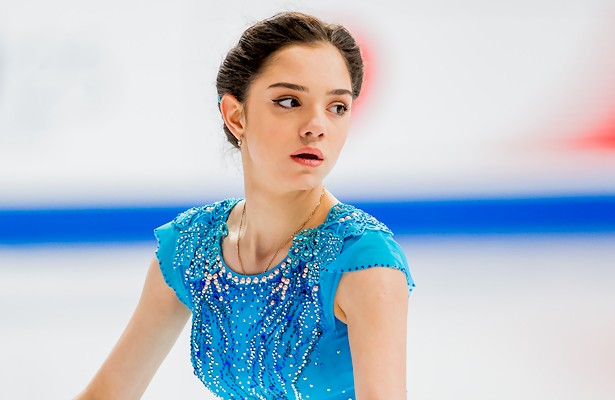 In a performance both charming and chilling, Russia’s Evgenia Medvedeva was foot perfect to win the Ladies short program at the 2017 World Figure Skating Championships in Helsinki, Finland. Skating to “River Flows in You” by Lorenzo de Luca and “The Winter” by Balmorhea, the defending world champion cranked out solid jumps to earn a score of 79.01, including a perfect 10 for performance.

The two-time European champion landed a triple flip-triple toe loop combination with one arm over the head on the flip and two arms over the head on the toe loop, a triple loop and a double Axel with one arm over her head. The program was highlighted by a delightful foot work sequence and all jump elements executed in the back half of the routine.

“Figure skating is a sport that combines art and athleticism,” the Russian said about her balance of the two requirements for success in the sport. “The athletic part for the technical side, you need power and also strength, and you also need emotionally to be strong. And it’s like fifty-fifty with technical and artistic, because if you have the technique and no components, and if you have the components and no technique, you don’t get anywhere.”

Bubbling with sass and personality, Canada’s Kaetlyn Osmond delivered a sensational clean short program to “Sous le ciel de Paris” performed by Edith Piaf to place second. The vehicle has been a reliable program nearly all season long and certainly came through for the national champion in Helsinki.

The 21-year-old landed a soaring triple flip-triple toe loop combination, followed by an exceptional triple Lutz and later a double Axel. Her first World Championships since 2014 after an injury sidelined her the past two seasons, Osmond was delighted with her return splash that earned a new personal best of 75.98 from the judges. She was one of only two skaters besides the Russian ladies’ team to garner level four Grades of Execution (GOE) on each of her non-jumping elements.

“I really wanted to skate and I was super excited to do this program, so I was just trying to stay calm and stay over my feet,” she said about her state of mind before the performance. “The warm up went really well, which is definitely a good help, but mainly I was just trying to think of what I do in practice and just take one thing at a time and be completely in the moment. And, I think I accomplished it!”

“It’s definitely entered my brain, but I know that I can only do what I can do,” Osmond said of the medal buzz around her. “I know the ladies’ competition has definitely improved in the last couple years and I can only enjoy it for the moment of it. I have to trust my training and if that leads to a high position, that would be great, but overall, I just want to be happy that I did my absolute best.”

Skating to “Herodiade” by Jules Massenet, teammate Gabrielle Daleman made certain Canada’s medal hopes did not ride exclusively on Osmond’s shoulders. The 2017 Four Continents silver medalist executed solid jumping passes including a massive triple toe loop-triple toe loop combination, triple Lutz and double Axel with a low-leg landing to earn a score of 72.19 and surprise the world with a third-place finish. With fiery and dramatic transitions and sharp movements throughout the program, Daleman was delighted by the outing.

“I was very pleased with the program,” said the 19-year-old. “There is still room for improvement, but I am very happy with what I did. I took one element at a time and I just enjoyed my skate.”

Sultry and sophisticated in her performance to Scent of a Woman, Russian Anna Pogorilaya executed a sturdy triple Lutz-triple toe loop combination and double Axel, but had a squeaky landing on the triple loop and ultimately earned a score of 71.52 for fourth place. The 2016 World bronze medalist’s performance featured an expressive footwork sequence and spins that showcased her long lines.

“I am satisfied with my performance, but there is no limit to perfection,” said Pogorilaya. “You always can do better.”

“I am not responsible for the scores,” she added, regarding her lowest short program score since the start of this season’s Grand Prix series. “The judges gave the scores the way they gave them.”

USA’s Karen Chen skated a sublime performance to On Golden Pond in which she portrayed a swan. The newly-crowned US national champion managed a triple Lutz-triple toe loop combination, triple loop and double Axel and finished fifth with a new personal best score of 69.69. Each of Chen’s elegant spins received level four GOEs.

“This was a confidence boost,” said Chen about her clean short program, which vindicated her errors at the Four Continents Championships where she placed 12th. “I kind of proved to myself that I can do this and I’m capable of doing things like this and I just want to really focus on that and have the same sort of mindset going into the long.”

Russia’s Maria Sotskova performed a sensitive and reserved short program to “Butterflies Are Free” by Alfred Schnittke with measured jumping elements, including the triple Lutz-triple toe loop combination, triple flip and double Axel. She finished a close sixth with 69.76.

“I felt nervous of course because it’s my debut at the worlds senior championships,” said Sotskova. “But I wanted to do my best, to prove that I am not junior anymore, that I can compete with seniors on the same level. I think that I do it better and better from one competition to the next.”

Fan-favorite Ashley Wagner skated a dynamic and sass-filled short program to “Sweet Dreams” by Annie Lennox to earn a score of 69.04. The 2016 World silver medalist managed a confident triple flip-triple toe loop combination, triple loop and double Axel. Tweaks to the program in an effort to increase the complexity of transitions and snare more components scores following the US National championships appear to have failed. The American’s components scores were below her short program debut in October at Skate America.

“I am one of many 69-point somethings and I have got plenty of energy and gas left in my tank. I don’t think that I am too far down in the hole at all,” said Wagner, optimistic following the skate. “I am not focusing on placement right now, I am focusing on my score and my score is setting me up for a great long.”

Skating to a program both contemporary and edgy, 2014 Olympic bronze medalist Carolina Kostner made a jittery return to the world championships. The statuesque Italian began calm and precise in her performance to Led Zeppelin and Kitaro, reeling off a measured triple toe loop-triple toe loop combination with gazelle-like grace but followed with tight landings on the triple flip and double Axel. Her main mistake however was a botched flying spin that travelled and took her off balance. The 2012 World champion received a score of 66.33. Highlights of the program included the 30-year-old’s unique arm positions on the layback spin and the positions she attained in the footwork sequence and transitions.

“Sometimes its just easier to do something and sometimes its harder and sometimes you need to fight more,” she said after her skate. “You try to do your best every time and obviously it’s not easy to be out there and doing a mistake. You would want to just get angry, but you stay there and you keep on fighting and you bring your exercise to the end and then after, there is a new day that will start.”

“It’s not about life or death,” Kostner said about the mistakes. “It’s about how lucky I feel and grateful to be here, to be able to continue my journey and to share my big love and the joy that figure skating gives me and teaches me and comforts me. And so, it’s not so much about the medal you chase, it’s about the journey you do.”

Wakaba Higuchi of Japan was ninth (65.87) and Elizabet Tursynbayeva of Kazakhstan was tenth (65.48).