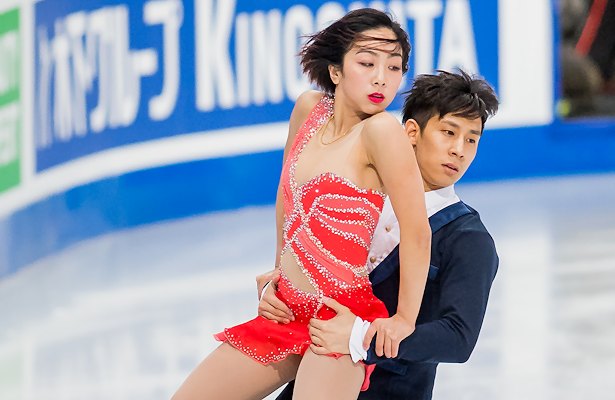 Two-time World silver medalists Wenjing Sui and Cong Han finally climbed to the top of the podium with their tender and intimate performance to “Bridge Over Troubled Water” by Paul Simon. Superbly executed elements included a level three quadruple twist, side-by-side triple toe loops-double toe loops with their arms over their heads, a soaring throw triple Salchow and a confident throw triple flip. The Four Continents champions only mistake came on Sui’s fall while attempting the side-by side triple Salchows. The performance earned the Chinese team a score of 150.83 in the free skate for a total combined competition score of 232.06. All of the team’s components scores were nine or above.

“We had our dream of World Championship gold and we are very happy to achieve this goal,” said Sui. “I do have something to improve. My triple Salchow had some problem. I hope next season I can do a wonderful program. We want to go to the top of the podium at next year’s Olympics.”

Germany’s Aljona Savchenko and Bruno Massot unspooled an ethereal set of elements to “Lighthouse” by Patrick Watson which they though might win them the championship. A soaring triple twist opened the routine followed by a side-by-side triple toe loop-double toe loop sequence and side-by-side triple Salchows. The team’s only noticeable errors came on their throw jumps when Savchenko landed the throw triple Axel with a low landing and the throw triple Salchow on two feet. The two-time European silver medalists earned a personal best free skate score of 150.46 for a total score of 230.30.

“I’m a little sad indeed,” explained Massot of their skate that didn’t clinch the gold medal. “We did a really good performance and we are close to the first place. But hey, last year we were third, this year we are second, so next year? But we are happy to be here and we want more!”

“It’s really hard,” said Savchenko, reflecting on the lessons from this year. “The season was really short and long,” she said, referring to the injuries that halted her team’s training. “This gives us to more to look forward to.”

Evgenia Tarasova and Vladimir Morozov of Russia skated their uplifting routine to “Music” by John Miles to score 139.66 in the free skate for a combined score of 219.03 points. The Grand Prix Final champions opened with a quadruple twist that carried galloping speed and followed suit with all clean jump elements (side-by-side triple Salchows, a throw triple Salchow, side-by-side triple toe loop-double toe loop-double toe loop combinations) with the exception of a two-footed throw triple loop. While most of the lifts performed by the 2017 European champions were performed superbly, such that Tarasova appeared to be floating, the team struggled on the Axel lasso lift.

“We did a pretty good job today and we are quite satisfied with elements and jumps,” said Morozov. “The beginning was really strong, then we maybe got too excited and emotional and lost some control and concentration, so we made a small mistake on the lift. This is our third World championship and we know how to compete here. We are more experienced.”

In their World Championship debut, China’s Xiaoyu Yu and Hao Zhang skated a refined program set to “Cavatina” and “Larghetto Amoroso” to earn 136.28 points for a total competition score of 211.51. They opened with firecracker of a quadruple twist, but faltered next when she underrotated the side-by-side triple toe loop-double toe loop and landed on two feet. They soldiered on to execute the side-by-side double Axels, throw triple loop and throw triple Salchow with finesse.

“This was my first World Championships and I felt quite nervous,” admitted Yu, “but I worked very hard for this. I was disappointed to make a mistake on the triple toe loop. I landed too close to the boards and was confused, but I am satisfied there were no big mistakes in the free program.”

2014 Olympic silver medalists Ksenia Stolbova and Fedor Klimov achieved unique silhouettes in the free skate with their contemporary body movement and kept the audience at the edge of their seats with their suspenseful performance to “Apres la Pluie”. Though their signature throw triple jumps were sweeping and solid, however, the side-by-side triples gave the Russians difficulties including his hand down on the second jump and her singling of the final jump in their planned triple toe loop-triple toe loop-double toe loop combination. Klimov also put his hand down to save the landing of his jump in the team’s side-by-side triple Salchows. The outing earned the team 141.03 points for a total combined score of 206.72. Their fifth place finish was an impressive vindication after placing thirteenth in the short program.

“We tried to leave yesterday behind and live in the moment and show that yesterday was a wrong day,” said Stolbova. “So today’s mistakes were maybe because we were so focused on demonstrating a clean skate. The preparation for the next season we will start as a new chapter, forgetting how bad this season was. We will work on new programs and elements.”

Liubov Ilyushechkina and Dylan Moscovitch of Canada squeaked ahead of their World champion teammates to place sixth with a free skate score of 133.05 and a total combined score of 206.19. The 2017 Four Continents bronze medalists showed a tenderness in their interaction set to “When You Say You Love Me” with exceptional throw jumps. Ilyushechkina’s difficulties came on her side-by-side jump landings, falling on the triple toe loop and landing the triple Salchow jarringly.

“Well, I would say that it was definitely a fight through the program, but we did a great job on re-grouping and refocusing and to keep working from the beginning to the very end,” said Ilyushechkina. “And even though, of course, we could not say or ignore the fact that we did have the mistake that gave us a little extra stress, we did an amazing job in how we worked through it.”

In the event’s biggest upset, two-time and defending World champions Meagan Duhamel and Eric Radford placed seventh with a free skate score of 133.39 and total combined score of 206.06. In their free skate set to “Non, Je Ne Regrette Rien” by Patricia Kaas, the Canadians sadly fell on the throw quadruple Salchow and Duhamel placed her free foot on the ice on the landing of the throw triple Lutz. The five-time Canadian champions did, however, manage side-by-side triple toe loop-double toe loop combinations and side-by-side triple Salchows. Like the short program, the team omitted the side-by-side triple Lutzes given Radford’s hip muscle injury.

“We made one major mistake, but it was our best long program of the season,” said Duhamel. “It was one of the lowest scores, but one of the best we’ve skated all season. The quad is a big risk; it’s going to be hit and miss, but both the jumps were done, the other throw was there, it was one of our better triple twists, a lot of great stuff.”

“That was so difficult,” said Radford of skating despite his injury. “I have never felt so afraid and unsure and I was thinking about withdrawing. I think our effort was beyond what I could have expected.”