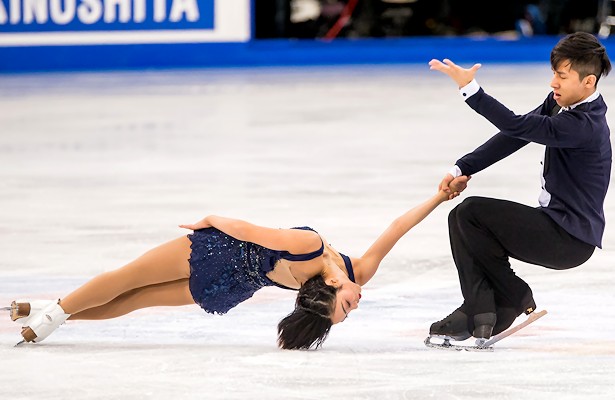 In an event of high drama, the pairs short program delivered highs and lows as well as tears, cheers and jeers at the 2017 World Figure Skating Championships in Helsinki, Finland.

In their return to figure skating following surgery to her feet, Wenjing Sui and Cong Han of China re-assumed their claim on the World Championship gold medal with a secure and stylish short program to “Blues for Klook” by Eddy Louis. The two-time World silver medalists received a personal best score of 81.23 to take first place. Edgy and intimate transitions wove the team’s side-by-side triple toe loops, secure throw triple flip and triple twist. All but eight of their components scores were 9 or above.

The German team of Aljona Savchenko and Bruno Massot performed a playful short program set to “That Man” by Caro Emerald. The jumps posed problems, however, as Savchenko two-footed her side-by-side triple Salchow as well as two footing and stepping out of the throw triple Axel landing. The 2016 World bronze medalists still conjured a saucy dynamic during the performance.

“After a difficult season with lots of breaks due to different injuries, we didn’t have a perfect preparation,” Savchenko explained regarding her early season ankle injury and Massot’s more recent back injury. “I also felt tired today with this quite early practice and late competition.”

Russians Evgenia Tarasova and Vladimir Morozov rallied from an injury to Tarasova’s right leg in the morning practice to finish third with a score of 79.37. Morozov’s blade sliced Tarasova’s leg open requiring fourteen stitches, according to coach Nina Mozer. Despite the injury, Tarasova was determined to skate and the team managed a strong level four triple twist, side-by-side triple toe loops and a squeaky throw triple loop during the spirited outing to “Glam (Electro Swing Remix)”.

“We were thinking about withdrawing because after this incident, we left the ice immediately. There was a long break off the ice, we didn’t know how I would feel in skates,” explained Tarasova about her harrowing morning. “But when I was asked ‘will you skate?’ I said, ‘I will!’ And I wasn’t thinking about the pain during our performance.”

“It was hard for me,” added Morozov. “I was worrying about my partner maybe even more than she was. I tried to support her and to do everything that depended on me. It was totally her decision to skate. She is a hero for all our country and for me.”

“We skated very well, but we only got a level three in the death spiral and need to pay attention in the future,” said Zhang. “We only have skated together for less than one year and look forward to continued improvement together.”

In fifth, the Russian team of Natalia Zabiiako and Alexander Enbert skated with precision to “Snowstorm” by Georgi Sviridov to score 74.26 points.

“We are very satisfied with today’s performance, said Zabiiako. “It was a clean skate and we even managed to show some emotions on ice. Of course, we are able to do even more as we are skating better at the practice. What we can improve on competitions is first of all, is speed.”

In sixth place with 73.14 is the Canadian team of Liubov Ilyushechkina and Dylan Moscovitch. The current Four Continents bronze medalists skated a dynamic and tender short program set to “Tango Jalousie.” Ilyushechkina showed grit to hold the landing of her side-by-side triple toe loop in what was otherwise a solid performance with well-executed elements.

“We went out there to do a job and we had a lot of fun,” said Moscovitch. “We focused on everything we needed to focus on and it went well. So, you know, obviously, we are going to look at it. There are some little things where, okay, this could have been a little bit better but, all in all, we are very happy with our skate and we are excited for the long tomorrow.”

In a surprise seventh place, two-time World champions Meagan Duhamel and Eric Radford earned their lowest World championship short program score since 2012. The energetic program to “Killer” by Seal featured noticeable errors including Radford’s jerky landing to the side-by-side triple toe loop, her hand touch down on the throw triple Lutz landing and un-synchronized spins. The six-time Canadian champions cut their scheduled side-by-side triple Lutzes when an injury to Radford’s groin last week did not recover. The numbness was not allowing him to pull in tightly enough on the triple Lutz, causing falls and concern in practice this week.

“We think we had a great skate and I guess the judges and the technical panel didn’t think so,” Duhamel said regarding the marks, “but we felt like we did great and that’s all that we can control. It wasn’t perfect, but when the music ended, we felt that we fought hard. We gave a good effort.”

“Now that we have this triple toe under our belt, I think it will be easier tomorrow,” Duhamel said looking forward to the free skate. “It will feel a little bit easier and less stress. We can still deliver a great performance. This by no means means that we are down and out and we are going to suck tomorrow.”

Americans Alexa Scimeca Knierim and Chris Knierim are in eighth place (72.17), Italians Valentina Marchei and Ondrej Hotarek are in ninth place (72.17) and France’s Vanessa James and Morgan Cipres are in tenth place (70.10).