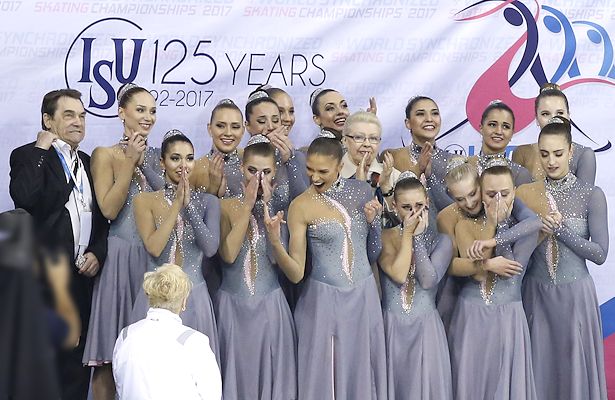 Team Paradise of Russia won their second consecutive title at the 2017 World Synchronized Skating Championships, which were held in Colorado Springs, Colo. The team edged out Finland’s Marigold Ice Unity by a mere 0.12 points, while Team Nexxice of Canada pulled up from fourth to earn the bronze.

A total of 24 teams representing 19 ISU members competed in the Championships. Originally called Precision Skating, Synchronized Skating was introduced in the 1950s. It is a highly technical form of Figure Skating characterized by speed, precisions, unison, intricate formations, synchro elements, difficult footwork, spectacular lifts and exciting transitions. A synchronized team consists of 16 skaters (plus up to four alternates).

Team Paradise opened their program to “Listen” by Beyonce with an excellent Move Element that garnered a level three and +3 Grade of Execution (GOE) scores from all nine judges. The Russians collected a level four for the Rotating Circle, the Block and the No Hold Element to earn 72.62 points.

Reigning World silver medalists RCKT (also known as the Rockettes) turned in a strong performance to “Mirror Mirror” by Jeff Williams as well, producing a level-four No Hold Element and Rotating Circle and picking up a level three for the other three elements. The Finnish team received 69.18 points.

Paradise put out a dynamic performance to “Warsaw Concerto” by Richard Addinsel and picked up a level four for their No Hold Element, the Travelling Wheel and their pair spin while the group lifts, the Intersections and the Move Element were rated a level three. The team from St. Petersburg was ranked second in the Free Skating with 136.08 points, but overall held on to first place at 208.70 points.

Nexxice’s program to “Hymn,” “If,” and “Memorial” featured five level-four elements. The 2015 World Champions scored 130.37 points and were ranked fourth in the Free Skating like in the Short Program, but overall moved up to third at 197.54 points.

2016 World bronze medalists Team USA – Haydenettes pulled up from fifth to fourth place with the third-best Free Skating of the night (194.43 points). 2016 World silver medalists Team RCKT (FIN) dropped from third to fifth after a three-points deduction for falls in the intersection and another deduction for a costume failure (193.87 points). Tatarstan (RUS) placed sixth (187.33 points).