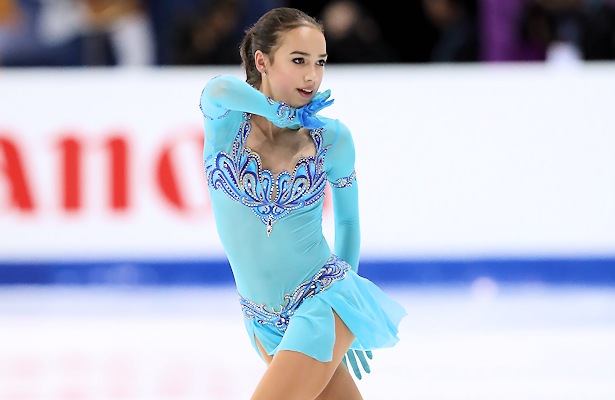 Alina Zagitova was the Russian “wunderkind” of the past season that easily dominated the junior ladies and took the Junior World title back to Russia. In 2016, the equally spectacular Marin Honda of Japan had won, ending the Russian ladies’ golden streak of five years at Junior Worlds. Honda finished a close second to Zagitova at the 2017 ISU World Junior Championships in Taipei, Chinese Taipei, in March.

Zagitova, who turned 15 last month, will now move up to the senior ranks and is considered a top contender for the Russian Olympic team. While the Russian ladies field is the toughest in the world right now, the teenager from Izhevsk proved that she is competitive after taking the silver medal at the 2017 Russian National Championships. Unfortunately, she was not age-eligible to compete at the European and World Figure Skating Championships.

Coach Eteri Tutberidze, who also coaches two-time and reigning World Champion Evgenia Medvedeva, is very positive about her student’s prospects in her debut this season.

“I think her chances are very high,” the coach commented. “If Alina is not slacking off in her work, I think she probably can fight for number two (in Russia).”

Zagitova nearly mirrored in juniors what Medvedeva did at the senior level this past season – skating consistently and winning one event after the next, with the exception of her second Junior Grand Prix in Ljubljana, Slovenia, (where she felt nervous, made mistakes and came third) and Russian (senior) Nationals in Cheliabinsk, where Medvedeva beat her.

It was Zagitova’s first international season and she feels she learned a great deal from it. Junior Worlds was especially an important experience for her.

“I learned about myself that I have character, “Zagitova acknowledged. “And while I was not able to cope with nerves the season before, I now with experience realize what I need to do.”

The skater needed to be not anything less than perfect in order to prevail, and she knew it. She also realizes that the competition won’t get any easier by a long shot.

“After (Junior) Worlds, I understood that I need to be more confident and I need to show more emotions in order to get a higher presentation score,” Zagitova pointed out.

The teen, who moved to Moscow in 2015 for training purposes and lives with her grandmother while her parents and little sister Sabina are in Izhevsk, raised the bar technically. She not only included a rarely seen triple Lutz-triple loop combination into her free program (and also into the short at senior Nationals), but also was the first skater to do all her jumps in the second half of the program, maxing out her points. However, this tactical move by her coaches also earned some criticism as the program is not so well balanced with all jumps in the second half.

“I do all my jumps in the second half and for it not to look like I’m doing only jumps, I had to do them exactly on the music with the other elements to make the components visible,” the World Junior Champion explained.

At press time, the music choices were not confirmed yet, however, Zagitova said that her coaches had picked her music already before the end of the season for her. The short program was mounted before the vacation in May.

The Russian Junior Champion feels ready to move forward. “There are no limits in figure skating, and it is good that it is developing, that a new generation of skaters is coming up that is better and more technical than the one before. I am trying not to stay behind the younger ones in our group. I am watching them. If they are doing something better than me, I am trying to do it even better. We have this kind of game in practice,” she explained.

In her training group, Zagitova not only can observe younger skaters such as Anna Shcherbakova, who landed quad toes, but obviously Medvedeva, too. She feels that training in one of the best ladies’ groups in the world is a great advantage, but at the same time also difficult.

Zagitova, whose father played ice hockey competitively, is looking forward to moving up to the senior level. “To compete with the older skaters will be a new experience for me. They have a lot more competitions under their belts and it will be interesting for me to test myself against them.”

Coach Tutberidze is satisfied with the progress her student is making.

“There were some failures in the season connected to growth and her changing body, but we went through these failures together,” Tutberidze offered. “She is not always stable, she is sometimes like a child and you need to admonish her. So, this is in her, but nevertheless, she is working hard.”

So the World Champion and the World Junior Champion continue to push each other. They won’t meet in the Grand Prix Series as Zagitova has been selected for Cup of China and Internationaux de France, while Medvedeva is scheduled for Rostelecom Cup and NHK Trophy. However, they could be up against each other at the ISU Grand Prix Final and for sure will face each other at nationals.