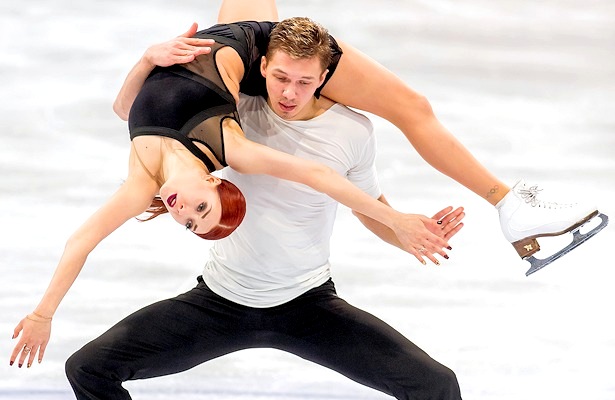 Six-time Russian ice dance champions Ekaterina Bobrova and Dmitri Soloviev are at a point in their career where retirement is on the horizon. An Olympic season is special for all skaters, but it is even more special if it might be the last competitive season. In this case, the team from Moscow did not lose any time. They began preparation while the pre-Olympic season was still underway and got right back to work following the World Team Trophy in April.

“We already started, even after the European Championships, to work on our new free dance,” Bobrova revealed. “We chose some parts of the music and invited a choreographer, Radu Poklitaru.”

The skaters worked with the acknowledged ballet choreographer, who was responsible for the opening and closing ceremony of the Sochi Olympic Winter Games, on the floor.

“When we transferred everything on to the ice, Sasha (coach Alexander Zhulin) joined us to work the steps and Dima and myself tried to bring Radu’s choreography on the ice,” the 27-year-old added.

Bobrova and Soloviev don’t want to reveal their music choice yet, and they have a reason.

“When you tell something in words, and people are reading it, they might understand it in a completely different way and they might like it or not like it from the very beginning,” Bobrova pointed out. “But as long as you haven’t heard and seen it, you won’t get the wrong impression. You need to see and hear it in order to appreciate it. It is not that we don’t want to play our cards yet, we know exactly what music we’re using and what kind of program we have, but just don’t want people to develop an opinion without having seen anything.”

The music is well known and the program has a touching story.

“First we found the music for the first part. Dima and I really like it and we wanted to skate to it for a long time,” Bobrova offered. “Sasha (Zhulin) liked it and Sergei Georgievitch (Petukhov, choreographer) also agreed.”

They took a little time to find the second part of the music, but now feel they chose the right option and that the two pieces are connecting very well with each other.

For both skaters, having a storyline is very important.

“In dance, you often are watching and you don’t understand what people are skating,” Soloviev noted. “This is where we want to set ourselves apart. We want that our programs have a meaning and a story. It is more interesting to watch when there is a story, when there is something going on in the program. For ourselves, it is also more interesting to tell a story year by year, to work on it all season.”

While the free dance has progressed a great deal, the 2013 European champions were still searching for the right music for the short dance in June.

“We found one, then a new ISU communication came out that there should be a Samba, but we only had a Rhumba. Now we have to change one piece of music and consequently everything else. We are working a lot with a ballroom dancer on the floor to know how our bodies have to move,” Bobrova explained.

“It is hard to choose the Rhumba,” Soloviev agreed. “This is the Olympic season after all and you want it to be comfortable, right, and that it is well received. If you compare it to the Rhumba of 2013, we were able to pick something that was quite nice, but now we cannot make any mistakes. Therefore, we are searching for the Rhumba and the right variation of music.”

“We want something that suits us, that we like and that maybe it is something new and not similar to what we’ve seen before,” continued the skater, who will turn 28 next month. “We are trying to do something original. There is a lot of music out there, Samba, Rhumba, Cha Cha, Merengue and so on, but it is difficult to find pieces that work well together.”

The reigning European bronze medalists don’t want to think of the upcoming Olympic year as their last season.

“Let’s say concluding season,” Bobrova offered with a smile. “We don’t know yet if it will be our last season or not. Maybe we’ll just go on, maybe I will have a child and we return after a year, maybe I will retire and Dima continues with a new partner. Only God knows what will happen in the future.”

For Soloviev, the focus is on the next season being an Olympic one.

“This is why we are approaching it meticulously, starting with the music and ending with some elements, steps and connections between the elements. We do not approach it as the concluding or last season, but as an Olympic season. We cannot make mistakes so that at the test skates in September there will be a minimum of questions what we have to add or to change.”

“This is why we have to make sure that everything is perfect,” he continued. “Everything has to be absolutely tasteful. It is like coming to a restaurant. When you are paying a lot of money, you want to have tasty food, a beautiful atmosphere and good service. It is the same we are trying to do this season, so that it is tasteful, a nice atmosphere and that everything is appreciated.”

For the Russian champions, it came as a surprise that Victoria Sinitsina and Nikita Katsalapov switched to Alexander Zhulin and joined their training group in Moscow in April, but they see it as a chance for themselves to improve.

“There are lot of well-known examples, like Yuzu (Yuzuru Hanyu) and Javier (Fernandez) and also when Tessa (Virtue) and Scott (Moir) skated with Meryl (Davis) and Charlie (White) and now they are skating with the French (Gabriella Papadakis/Guillaume Cizeron),” Bobrova pointed out. “The couples that are skating at the same level are always pushing each other forward. When there is another strong team, we have sparring partners in the group.”

Bobrova and Soloviev have set high goals for themselves for the Olympic season.

“The goal is the top three at the Olympics,” Soloviev said. “And the gold in the team event,” Bobrova quickly added.

In order to achieve these goals, the dancers know they need strong material and they have to do well at the Grand Prix events, Russian nationals and Europeans in Moscow. They want to improve all aspects of their skating.

“We are taking aim to fight for the top placements and we hope that it will happen in this season as we took something new for us and tried to listen to what the critics say. I think we’ll be stronger in the upcoming season and we can do it,” Soloviev shared.

“Obviously, as athletes, we want high placements, but again, we want to leave a bright mark with our programs and that people are talking about the programs and appreciate them and to end this stage of our career on a high note,” added his partner. “We want to finish this Olympic cycle on a very high, bright note.”

Bobrova and Soloviev are scheduled to compete in their home city in Moscow for the Grand Prix in October and for Cup of China in November. They also would like to do one or two challenger series events, but will know for certain later this summer.