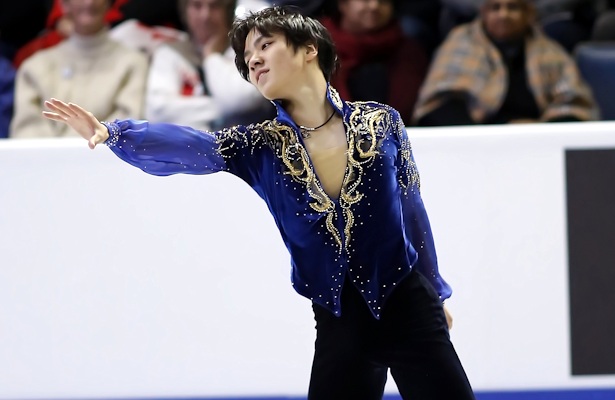 Japan’s Shoma Uno claimed victory in Regina, Sask., at the 2017 Skate Canada International, reaffirming himself as an Olympic gold medal contender with a suite of quadruple jumps and musicality. USA’s Jason Brown rose from third to second overall, while Russia’s Alexander Samarin pocketed the bronze in his Grand Prix debut.

Shoma scored a total of 301.10 points and ever earnest, noted room for improvement as he looks towards his next competition, Internationaux de France.

“Today’s free like the short program yesterday, I think the overall components were satisfactory and I think I did what I could at this point,” said the 2017 World Championship silver medalist. “I do think my stamina is lacking, so that is what I will work on. I really need to improve my stamina and my fitness.”

In his dynamic and dramatic free skate to Turandot, a resurrection from the 2015-16 season, the 19-year-old managed three quadruples, including a secure opening quadruple loop, but had a messy landing on the quadruple flip. Ever disciplined, Uno arrived in Regina with expectations.

Brown channeled his unmatched lyricism to manage the silver medal without the quadruples of his competitors. The 2015 U.S. National Champion finished with a total combined score of 261.14 with his new programs this season.

“I am very excited with the performance,” he said of his free skate, orchestrated specifically for him by Maxime Rodriguez. “There are definitely parts that were lacking a little, but to come in here and skate last and give it my all early on in the season with this program being so difficult choreographically, I am really excited about how it went and how it’s being received. In that sense, I am very happy. There is a lot I need to go home and work on which I think was visible from the performance, but I tried to stay very ‘in the moment’ and take it step-by-step. I was proud I was able to do that.”

“I was pretty happy about it,” Brown said about his quadruple toe loop attempt which he underrotated and fell on. “Obviously, I would love to be on my feet. I was super excited about how they were going in the six-minute warm up. They felt great, so going into it, I didn’t want to hold back at all, so I am really proud. Sometimes in the past, I have gotten a little slow or been a little more tentative, and I didn’t this time. I went for it full out.”

The popular skater’s quadruple plan – none in the short and one in the long – was set through an arrangement with his coach, Kori Ade.

“We are being strategic in how we integrate the quads into two new programs,” said Ade. “He has two new programs this year and Jason takes Rohene’s choreography very seriously. He is not willing, and we are not willing, to let him water down choreography in order to integrate quads because we don’t think he has to. We also recognize there is a learning curve to doing both for Jason.”

“My magic number for him was that if he could come in and land one quad each time he tried three, that includes circling, popping, if he got one out of three, then it can go in the program<” she continued. “Jason loves goals, so if we give him a tangible goal like that, he will go grab it, and I knew that’s what was going to happen. I would definitely look forward to one or two quads in this program. And for sure in the long by the end of the season.”

Samarin surprised the skating community, including himself, with sturdy performances that registered 250.06 points in total in his Grand Prix debut, setting personal best scores across the board.

“I am very pleased with the result and honestly I did not expect that,” said the 2017 Russian National silver medalist. “Coming into the Grand Prix, I wasn’t expecting to get onto the podium. That’s really nice and unexpected. My performances were like working versions and there are things I need to fix and improve for the future.”

Samarin was proud of his technical execution in his first senior Grand Prix event. “I am very pleased I was able to land the quad Lutz in both programs,” he said. “Just not a long time ago, I felt uncomfortable on the Lutz and I hope that I now have overcome this. I have only positive memories of this event.”

In an even bigger surprise, three-time World Champion Patrick Chan, finished just off the podium after he was unable to build on a respectable short program, falling on and doubling jumps throughout his free skate set to “Hallelujah.” The Canadian completed the competition with a total score of 245.70.

“My legs were not being patient and taking the time to load and jump,” said Chan. “My timing was too quick. At least I know what I am doing wrong and we will work on it when I get back. Yeah, it sucks but I’ve had the great highs too, so I gotta trade it off sometimes.”

Michal Brezina of the Czech Republic slipped from fourth to seventh overall, while Jorik Hendrickx of Belgium finished fifth.

Samarin is slated to compete at the Internationaux de France, along with Uno. Brown, Chan, and Brezina will all share ice again at NHK Trophy.