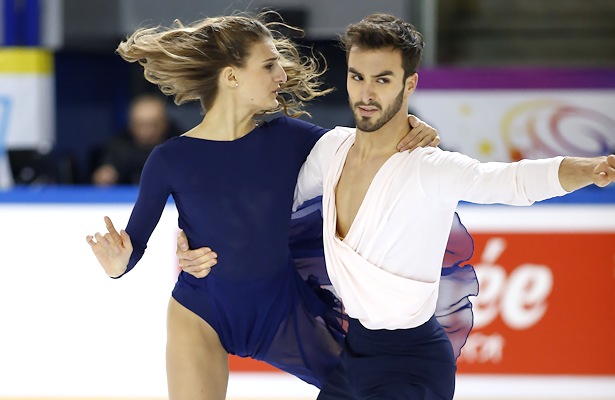 Gabriella Papadakis and Guillaume Cizeron of France took gold at the 2017 2017 Internationaux de France today, qualifying for the Grand Prix Final next month. USA’s Madison Chock and Evan Bates maintained second place to finish with the silver, while Alexandra Stepanova and Ivan Bukin of Russia pocketed the bronze.

Papadakis and Cizeron bested their short dance score (81.40) since winning at 2017 Cup of China (81.10) two weeks ago in their routine to “Shape of You” and “Thinking Out Loud,” receiving no less than +2 Grades of Execution (GOE) across the board.

“We really like our short dance and we really take pleasure on working on it,” said Papadakis. “We wanted our short dance that was really like us that we could relate to a lot more than usual. I think that’s what we did with this song. We love the choreography.”

“We also know our weak point was the technical part,” she admitted, “so we really worked a lot on it this summer and we’re still working on it. There is still work to do, but we know that we’re on the right track.”

The two-time World champions gave yet another inspiring performance to “Moonlight Sonata,” displaying strong lifts, twizzles, and steps—all of which garnered no less than +2 Grades of Execution (GOE).

“We wanted something that would honor the program, the lines, the movement,” Cizeron said of their free dance costumes. “We try not to hide the bodies too much and really have something that emphasizes the fluidity and the choreography itself. The costumes are a very important part of the process. We try not to make them the main focus.”

The team wanted to bring in some for choreography with a modern and contemporary style, and reached out to American Ballet Theater principal dancer Jeffrey Cirio.

“We always like working with people not in the skating world,” said Cizeron, “because it brings a fresh eye in what we do. It’s always very interesting to see through dancers’ eyes, not only figure skater eyes. It was a really great collaboration and we had so much fun working with him. It was an amazing experience and we hope to work with him again.”

Papadakis and Cizeron will be competing alongside Canada’s Tessa Virtue and Scott Moir at the Grand Prix Final later next month.

“It will be the first time we are competing against them this season and the last time before the Olympics,” acknowledged Papadakis. “It’s going to be important dealing not so much with the competition but with the pressure of being together, all six couples at the same competition. It’s going to be interesting and a great practice before the Olympics.”

“It’s a lot of pressure,” she added, when asked about competing against the Canadians at the Olympics, “but it’s also very lucky to be in that place. We’re very young and this is our first Olympics. It can be a strength never having been to the Olympics too, because we really don’t know what to expect. We’re just excited and we don’t have any memories attached to it, so we’re just going to go and skate the best that we can.”

Madison Chock and Evan Bates posted a season’s best for second place (73.55) in their routine to music by Marc Anthony which featured a level four curve lift and strong twizzles.

“We are pleased with our skating,” said Bates. “It maybe wasn’t as strong technically as Cup of China, but it was a season’s best as far as the score and I think we’re getting a lot more comfortable competing and getting into that kind of place where we can skate really well.”

“We really spent a lot of time on our technique with Igor (coach Shpilband),” said Chock, adding that they love coming to France and it’s one of their favorite places. “We are working on all the little details because it is full of little nuances. Every beat is so important. It really makes it more enjoyable for us to skate when we are right on top of the music.”

In their free dance to “Imagine,” Bates had a slight break in the rotation during the second half of the twizzles which were graded a level three. The team otherwise displayed strong lifts and level three steps to finish second (108.30) in their expressive free dance and overall (181.85).

“We felt great skating this evening,” said Chock. “This is one of our favorite programs that we’ve ever had, so every time we perform it, it’s definitely something that is very special for us.”

When they chose their music this season, the 2017 Four Continents bronze medalists took into account that a lot more attention would be on figure skating.

“We really wanted to take this opportunity and have something that was really meaningful to us and hopefully to other people,” said Chock. “We hope when they hear the music, they also feel it’s meaning as well because the world is crazy right now. Things aren’t perfect, but I think our message and what we want to share with the world is that there is hope and show people that things will get better. By working as one and being kind to one another, it can be achieved.”

The 2017 U.S. silver medalists are excited about qualifying for the Final.

“We know we have a lot of room to grow,” acknowledged Chock, “and we did leave some points on the table. We’re going to go home and really work on all our elements and keep growing this program as it can be something really special. So onward and forward!”

Stepanova and Bukin oshowed good level four twizzles and a curve lift in their short dance (70.02), however, only met one of their key points in the rhumba pattern which resulted in a level two.

“We skated calmly and we felt very confident about our program,” said Stepanova. “The audience was very excited and gave us a lot of support and energy.”

The 2017 Russian silver medalists were solid in their free dance to “Liebestraum,” however, both step sequences were graded a level three as well as their rotational lift.

“We are very pleased that our coaches told us we skated with our soul today,” said Stepanova. “It was really important for us. We are also very happy to have taken third place again in our second Grand Prix.”

Canada’s Kaitlyn Weaver and Andrew Poje finished fifth (68.94) in the short dance after Poje caught his blade on a twizzle. Both skaters are battling injuries and fought through their expressive free dance, finishing third (108.03) and fourth overall (176.97).