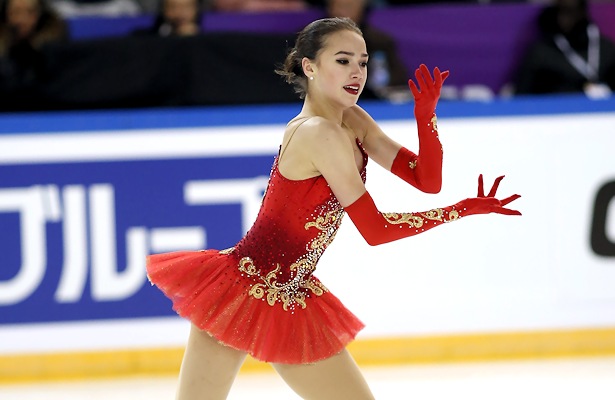 Russia’s Alina Zagitova rose from fifth place to capture her second consecutive Grand Prix medal of at the 2017 Internationaux de France de Patinage on Saturday. Teammate Maria Sotskova won the silver, while Kaetlyn Osmond of Canada slipped to third to finish with the bronze.

Zagitova struggled in her short program yesterday, falling on a triple Lutz and underrotating the back half of a triple flip-triple loop for fifth place in the short (62.46).

Today, the 2017 World Junior champion rallied back with a new personal best of 151.34 to win the free skate and event overall (213.80). Her routine to Don Quixote featured a total of seven clean triple jumps, as well as level four spins and footwork.

“I am pleased with the free skating because I did my maximum, my best and I’m satisfied with that,” said the 15-year-old. “The short program was on a different day, today was new day. I started from scratch and tried to go out with a cool head.”

With two grand prix golds under her belt, Zagitova has secured her a spot on the Grand Prix Final next month. Moving forward, the 2017 Russian silver medalist’s goal is to “improve on her short program.”

Teammate Sotskova delivered a strong short yesterday which featured a triple Lutz-triple toe, but stumbled on the landing on the triple flip in her routine to Swan Lake. The teen earned a season’s best (67.79) for second place.

“It felt easy to skate and it was nice with the audience too, so I enjoyed performing,” said the 2017 Russian national bronze medalist. “Unfortunately, I made an error on the triple flip and I’m upset about that, but overall, I think it was not a bad performance.”

“My dress doesn’t represent a swan because I’m portraying a girl that is dancing at a ball,” she explained when asked about her costume. “We decided together with my coach on the dress to freshen me up a little bit.”

Sotskova didn’t feel any additional nerves regarding pressure and qualifying for the Grand Prix Final. “I was actually quite very calm. I started to worry as I was too calm. I just wanted to go out and do my job.”

“Today I am pleased to have skated a clean free program and that I was able to cope with my nerves,” shared the 17-year-old. “It was not the maximum of what I can do, but it was a consistent performance and from there I just want to improve.”

It’s unknown yet if Sotskova has done enough with her two grand prix silvers to qualify for the Final, however, her next event will be at the 2017 Shanghai Trophy next week.

Osmond was confident going into her short program (69.05) to music by Edith Piaf, but doubled her last jump in a planned triple flip-triple toe and put a hand down on the triple Lutz.

“Definitely there were a few mistakes in my program that I wasn’t too excited about,” said the three-time Canadian national champion, adding that she didn’t notice anything wrong with the ice. “I wish I had done this better, but overall, I pushed through my whole program and I’m happy where I am.”

“I didn’t feel any extra nerves today,” said the Canadian, when asked about the pressure of qualifying for the Grand Prix Final. “Mistakes happen now and then. The short program has been going well all season and last time I made a few mistakes in the short, it ended up the best event I had, so maybe that’s a lead up for that.”

The 2017 World silver medalist had a strong start in her “Black Swan” routine, landing a solid triple flip-triple toe, but then stepped out of a double Axel-triple toe and later fell on a triple loop and singled an Axel.

Overall, I’m happy with my performance today,” said the 21-year-old. It wasn’t great, I made a few mistakes, but overall I felt like I skated a strong program.”

“This program is one that I’ve wanted to do for a few years, said Osmond when asked how she made “Swan Lake” her own. “To finally skate it this year, I worked with Jeffrey Buttle on the choreography. He brought a different style to the ballet, trying to make the choreography like the ballet, but also contemporary so that it fits my style of skating instead of the pure ballet style, which isn’t always quite what I am.”

While Mai Mihara of Japan underrotated the back half of a triple Lutz-triple toe in her short program, she was otherwise clean in her “Libertango” routine for a fourth-place finish (64.57). The 18-year-old gave a solid free skate which featured seven triple jumps to place fifth in the long (137.55), and with a total score of (202.12), maintained fourth overall.

Teammate Yuna Shiraiwa skate a flawless short program to “The Girl with Flaxen Hair,” earning a new personal best (66.05) as well as the highest Total Element score in the Ladies’ short program event.

“This was the best performance of the season so far and I feel very relieved,” the 15-year-old said. “I had little time to prepare between NHK Trophy and here, so my first priority was to condition my body. I also I wanted to prepare mentally and did so I did some meditation and I think it helped.”

“Actually I very surprised that I’m skating here,” said the teen when asked about her experience at NHK. “At NHK Trophy, I felt insecure as I felt like wasn’t ready yet and I didn’t skate well. At this competition, I did not have much expectation. I just decided to come here and enjoy my skating.”

Kazakhstan’s Elizabet Tursynbayeva, who stood in sixth after the short, finished third in the free skate (138.69) and fifth overall (200.98). Her routine to “The Prayer” was solid and featured six clean triple jumps and strong spins and footwork.