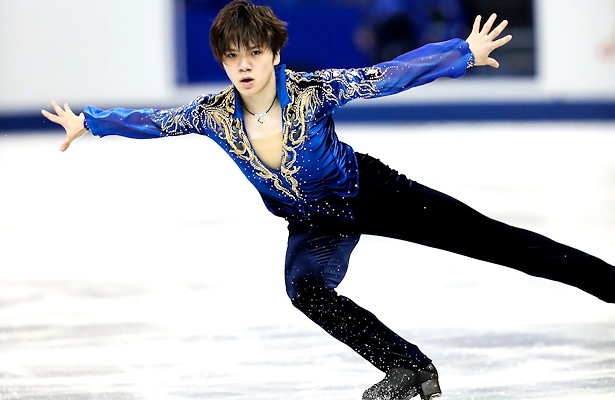 Uno’s program to selections from Turandot, including “Nessun Dorma,” began well, with a well-executed quadruple loop  immediately followed by a solid triple Axel. However, as the free skate neared its end, the 20-year-old seemed to tire, and fell on his trademark quadruple flip which was under-rotated. He still landed a quad toe, but had difficulty with his three-jump combination.

Nevertheless, the defending champion earned level fours on his spins and footwork to finish in first with 186.47 and overall (283.30).

Tanaka opened his daring routine with a solid quadruple Salchow, however, he stepped out of the second quad Salchow which was meant to be a combination jump. The 23-year-old went on to land a quad toe, a jump he had never demonstrated in competition, but then struggled on several of following jump passes. He finished second in the long (175.81) and overall (267.15).

Mura stepped out of a triple Lutz in the latter half of his routine to Phantom of the Opera and received an edge call on a triple Lutz combination, but otherwise gave a solid free skate. The veteran skater also landed a quad toe and delivered two level four spins to finish third in the long and overall (258.41)

Immediately following the completion of the Men’s competition at the 2017-2018 Japanese championships, the selections for the Olympic team were announced: Uno, Tanaka, and Yuzuru Hanyu were named to the men’s Olympic team. While a skater must compete at nationals to be considered, Hanyu earned an exception to this rule as a former World medalist who had missed nationals due to injury.

Mura was named as the first alternate, and then Tomono and Murakami, respectively.