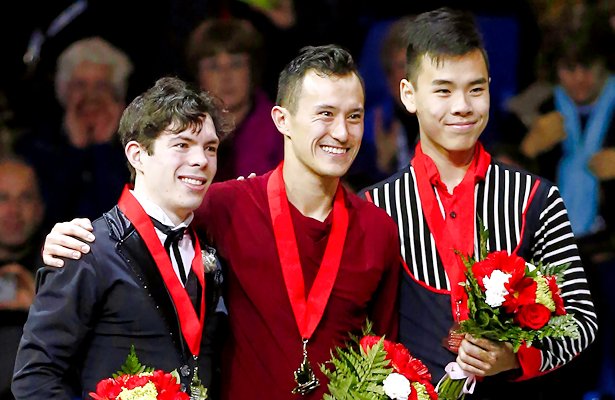 Patrick Chan made history in Vancouver claiming his tenth national championship in the same city where he won his first. The 2014 Olympic silver medallist skated a technically tentative, but soulful free program to “Hallelujah” by Jeff Buckley and completed his national career with a total score of 272.24. In the long program, Chan managed two quadruple toe loops, but doubled his triple Axel attempts.

“I was telling [coach] Ravi [Walia] it is obviously not the dream skate I expected for number ten,” Chan reflected. “It feels good and maybe it’s just not having the best skate of my life, having won my tenth, but there have been a lot of great ones that I can count. Of course, I would have loved to have landed and nailed every single jump, but I did what I had to do, and I had a lot of my own demons coming here. I was able to accomplish a big goal and a big step forward, so I feel good for the Olympics.”

Chan said his competitive absence since Skate Canada International after finishing off the podium was actually a benefit. The three-time world champion withdrew from NHK Trophy and thus lacked enough points to qualify for the Grand Prix Final.

“I trust myself and trust the training that I had put in these last two months,” he said. “While I didn’t do the full Grand Prix, I made the best out of it and I think I was able to do that. I was able to really say to myself, ‘Do I trust myself letting go and letting it happen?’ and I did. Now it’s looking forward and looking at those little details. Axels were just a little rushed and such.”

Keegan Messing skated determinedly to Charlie Chaplin in the free program to claim the silver medal with a total score of 259.25. He managed a quadruple toe loop and five triple jumps in his routine.

“This is the closest I have been to crying in forever for anything,” the 25-year-old said after his performance in the free program. “I can’t even put it into words. I am just in hog heaven right now. I was trying to stay strong, take one thing at a time. I was kind of in the middle between skate it like a show all out and skate it like a long program and conserve energy and take it one step at a time and just fight. After that first quad, it really just sparked something inside of me and I fought for every step, every position. I don’t think I fought this hard for a long program in my life.”

“I am not sure I am going to be going for another Olympics, but I do want at least two more seasons,” Messing said of his future goals.

2015 Canadian national champ Nam Nguyen won the bronze medal with the same program that once won him gold: Selections from La Strada. With a quadruple Salchow and two triple Axels, he finished with 258.16 total points.

“These last two years have been absolute hell for me,” Nguyen said after his jubilant performance. “I have gone through so much this year. Mentally, it has taken a toll on me and it has been hard to skate. I haven’t had the joy in figure skating until the last five weeks. Today was really special for me. I just felt relieved after skating this long program, because I have put so much effort into this.”

“I honestly didn’t have that much pressure since I was quite pleased with my skate yesterday,” the 19-year-old shared about handling his nerves. “I kind of just wanted to continue the momentum going forward, but I was a little bit nervous going into the six-minute warm up. I didn’t really feel any pressure, not enough to throw me off.”

Just last month, Nguyen made the bold independent decision to toss his planned free program this season set to George Gershwin’s An American in Paris in preference of La Strada.

“I didn’t find a comfortable flow that I had with this program,” he said in comparing the two routines. “I was doing clean longs every day [to La Strada]. With the other program, I only did four clean programs the entire season, so I was like ‘Yo this is stupid’ but there was no time to do a new program. This was the first decision I made on my own.”

“I feel f***ing great!” Baldé said. “I know I’m not supposed to say that, but I feel f***ing great. Honestly, all I wanted is to experience this. All I wanted is to be here and to be present with my audience. I wanted to create a moment with everyone and we all shared something this weekend. We all lived something this weekend together, and that is something that I am going to remember for the rest of my life. So, this is my goodbye gift and leaving a piece of me in the community of skating.”

The 27-year-old plans to retire from competitive figure skating and focus on show skating.

2014 Olympic team silver medalist and sentimental favorite Kevin Reynolds buckled under the pressure of expectation in Vancouver falling, two-footing and under-rotating jumps during his Karl Jenkins free program. He finished with 249.30 points.

“It wasn’t what I hoped for, that’s for sure,” Reynolds said. “I did what I could, I fought for every element out there, but in the end, it just wasn’t enough. There were just too many small mistakes that added up in the program. I have to say I am disappointed, but it is sport. It happens on the day and I did everything that I could do to be prepared for this event and it’s unfortunate that I couldn’t do my best for the home crowd today.”

“The [quadruple] toe [fall] took me off guard a little bit,” the 27-year-old specified. “It was hard to get back into the feel after that. Just with each small mistake that I made, it put more pressure on me to land everything cleanly, because I knew there wasn’t a lot of room for error. I wasn’t able to perform it as I would have liked with all the little mistakes.”

Joseph Phan finished in sixth place with a total combined score of 241.71, followed by Roman Sadovsky (233.67).