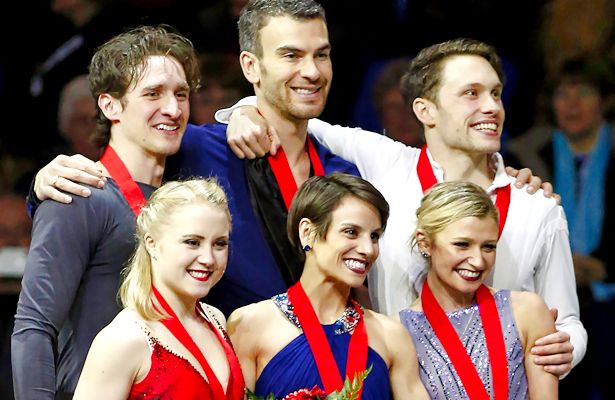 Meagan Duhamel and Eric Radford were glorious before their home country skating to Adele’s “Hometown Glory” to snare a seventh Canadian title in their final appearance at nationals. With strong performances in the short and long programs – the only noticeable error being Duhamel’s fall on the throw quadruple Salchow – the two-time world champions accrued 234.55 total points at the Doug Mitchell Thunderbird Sports Centre in Vancouver.

“We were really nervous before we skated tonight,” an exuberant Duhamel admitted. “This was one of the more nerve-wracking Canadians in a few years. I don’t even know what we were so nervous about. I think overall, we are so pleased. We felt more confident than we have all season.”

“It was a super emotional Canadians for ourselves and for our friends and our competitors,” Radford said. “For me, it was a whirlwind of emotions before we started. It was a unique challenge for me to steady that. We were like ‘Why are we so nervous? It’s just nationals and we don’t have a huge expectation on us?’ Maybe we just have a higher expectation on ourselves perhaps partly, because we know it’s our last nationals and we really want to give the audience a great moment; a final moment together as well.”

“For me, inside, it was more treacherous and it wasn’t as zen as the short program felt,” Radford reflected on the resurrected Adele program which the team swapped in following last month’s Grand Prix Final.

Julianne Séguin and Charlie Bilodeau claimed the silver medal with 213 total points bolstered by an outstanding free skate to “Where’s My Love” by Syml that featured a throw triple loop towards the program’s end.

“Last nationals we were second (2016). It was two years ago and now we come back and still finished second behind Meagan and Eric,” Bilodeau said about their consistent finishes at Nationals. “We are really happy about that.”

“We just said right before going on the ice, we just want to be proud of us,” Séguin added. “The road to the Olympics is really hard and it’s really long, so we have to keep the focus in a good place and that was the main thing before stepping on the ice. We just got the energy from the crowd and it was just wonderful!”

“We tried to skate more like who we are in life and less like how we have been told to,” Bilodeau said about their on-ice chemistry. “So, we are trying to be more intricate in the choice of music and how we want to train and how we feel. I feel like we are two completely different athletes than the past years and we will continue on that wave.”

“We started off a little rough,” Moore-Towers admitted. “Our opening jump series was not good at all, but we fought through the rest. I think the beginning overall was a a little bit tougher than we have been training at home, but I feel our second half really picked up strong and helped us to secure a podium position.”

“We are the best-trained team we have ever been and perhaps the best-trained team here,” she added about their preparation. “We have really put the run-throughs in and I think that’s what saves our butts when elements get a little bit tight; we know we have the training to back ourselves up.”

“The way the training has gone the last three months, we knew that we could come down here and do what we had to do, and we were pretty confident the results were going to be there,” said Marinaro methodically. “Today wasn’t even what we have been training, but we did enough. We got the job done and now we build to an even bigger score and even bigger things hopefully in a month.”

For the first time in their career, Lubov Ilyushechkina and Dylan Moscovitch landed off the Canadian national podium after difficult performances in both the short and free programs that resulted in 190.53 total points. In their “Billy Vera & The Beaters” free program, Moscovitch stepped out of the side-by-side triple toe loop and Ilyushechkina fell on the throw triple Lutz.

“It’s been a bit of a roller coaster getting here,” said Moscovitch, an Olympian at the 2014 Olympic Games. “We have been through some big obstacles, beaten up, but made it here and I think we should be very proud of that. It was not a competition that we wanted or that we were ready for. We were prepared to do our job and our team did an incredible job preparing us. Unfortunately, that’s sport. It didn’t go the way we wanted. Someone’s got to win, and someone’s got to not win. It wasn’t in the cards for us today or this weekend.”

“We don’t really have plans yet going forward,” he added, “but I think we should still be very proud of everything we have accomplished as a team and how much we have grown over the last four years and how much we pushed to get here and to get ready for this competition despite setbacks along the way.”