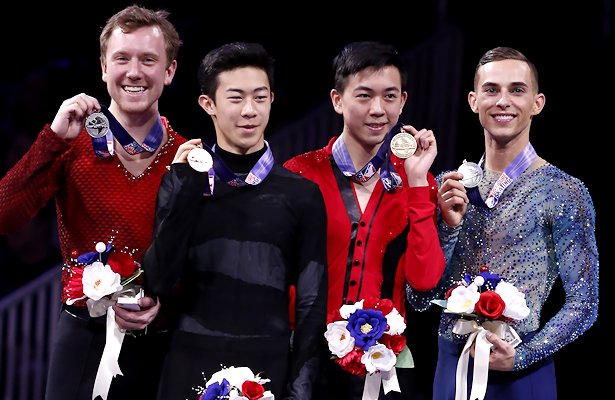 If there were one sure bet at the 2018 U.S. National Figure Skating Championships, it was that Nathan Chen would claim the men’s title, which he did on Saturday in San Jose, Calif. Ross Miner and Vincent Zhou jumped from sixth and fifth place after the short program to the podium behind the defending champion to capture the silver and bronze, respectively.

The 18-year-old executed five quads in his “Mao’s Last Dancer” program, beginning with a splendid quad flip-triple toeloop and a second quad flip. He later brought out a quad toeloop-double toeloop, which was complemented with a quad toeloop and quad Salchow. A closing triple flip-double toeloop-double loop also scored in double figures for the man who has emerged as the favorite to win the gold medal at the PyeongChang Olympics. Still he could find room for improvement.

“I made a mistake on the Axel, but I’ll address that when I get home,” Chen said. “The quad Lutz I didn’t feel this week. I just wanted to put out a clean program, and the flip was better. I used this as a confidence booster for February and motivation for next month.”

Training in Los Angeles with Rafael Arutyunyan, Chen is originally from Salt Lake City and was inspired to skate when the Utah capital hosted the Olympics.

“It’s been a really fun journey since 2002 when I started,” he added. “This is all I dreamed of. I put all the work in to get where I am now. I still need time to wrap my head around everything, but it’s happening. This whole season has gone really well. At this point, it’s a matter of checking off that next box. It’s a culmination of all of my hard work.”

Although he placed sixth at the World Championships in March, Chen has collected gold medals at Four Continents, the Rostelecom Cup, Skate America, and the Grand Prix Final in the past year. His main contenders from Japan and Russia did not skate cleanly in their national championships, which is something he believes scheduling affected.

“I definitely set a big bar for myself last year,” Chen said. “I still have a way to go. I know what it feels like to compete at Worlds, so I know what it’s like at a big senior event. I do know that for Shoma (Uno) and Mikhail’s (Kolyada) sake, their Nationals were a week after the Grand Prix Final. Not to make excuses, but I know that would be difficult. I can’t affect what they do, so I just do the best I can do.”

“I was a little sick going into this event, but I made use of the time I had, getting healthy,” he added. “So I came here and did my job. I have had frustration throughout the season, but you can’t re-create last season because it is the past. There will be adjustments on the long program, depending on what my body will do. When the time comes, I need to be able to do my job.”

Miner skated to the music of Queen and sparked the judges with a quad Salchow. He followed with a marvelous triple Axel-double toeloop and triple Lutz-triple toeloop. It is the first U.S. medal for the Bostonian since his silver in 2013, as he was fifth the past two seasons.

“That’s what I am capable of,” said the 26-year-old. “I do that at home, and it’s great to do it on the big stage. I know it’s not a fluke, this is the big moment. I have no regrets, at the end of the day, I did my job, and it’s up to them (committee) to decide (his Olympic fate). It’s my plan to warm up triples and do it in the moment. It felt good to just go out there and stomp a beautiful quad. It’s such a pure happiness not caring what the score is. You did your job, what mattered, and nothing can take away that happiness. It’s a pretty incredible feeling and why we skate.”

Zhou attempted five quads, although he under-rotated four, falling on the final one. Still, his opening quad Lutz-triple toe, along with a triple Axel-double toeloop and triple Lutz-single loop-triple flip, saved him during his “Moulin Rouge” routine. The Bay-area skater won the U.S. silver medal last season before winning the world junior championship.

“I love what I do,” said the 17-year-old. “I think I let my legs get away from me during the quads in the second half. I know I am capable of doing that, and it doesn’t change how proud I am of myself. I definitely feel ready and deserve to go to Korea. I came here and I skated, and the rest is not up to me.”

Zhou trains in Riverside, Calif., with Tammy Gambill, and is extremely popular in in San Jose. When he placed fourth in the Cup of China in November, he spoke fluent Mandarin to the press.

“There was no pressure, only a few hundred thousand or million people watching,” Zhou laughed. “Ice is ice. I said to myself ‘This is training, this is training.’ I felt the strength I have accumulated over the past month or two. The crowd was amazing, and it was good not hearing them, causing damage to my ear drums. This season was a roller coaster, I would say there were issues with my training during the Grand Prix season. Before the Grand Prix in France, we changed some things, and obviously it worked.”

It seemed Adam Rippon’s dreams were over from his first element when he under-rotated and fell on a quad Lutz. He caught himself with a triple Axel-double toeloop-double loop, along with spectacular spins and footwork, to earn 171.82 points. However, with a total score of 268.34, the skater fell from second to fourth overall. The 28-year-old won the title in 2016, but he missed last season’s Nationals due to a broken foot.

“I take full responsibility,” Rippon said. “I felt really good all week. On the first quad Lutz, I felt like I was losing my right foot a little bit. I let that feeling get the best of me, like it was going. But, I did the things the criteria says to be selected for the Olympic team, but with that being said, Vincent skated very well tonight. No matter what the selection is, I will be 100 percent OK. As a competitor, I take whatever situation given to me. Ross and I, for example, have come up together for 10 years, and I am genuinely happy for him. This is what we train for. When we make a mistake, we get up and keep doing.”

Grant Hochstein finished in fifth place with 255.31 points. His routine to Phantom of the Opera was highlighted with a triple Lutz-single loop-triple Salchow along with good spins and footwork.

“Obviously it was not the performance I was looking for, but it was nothing to be embarrassed for,” the 27-year-old said. “I don’t have any regrets. There’s something very special about nationals, it happens only once a year. The crowd was very supportive. I think it comes down to perseverance. I didn’t make it to my first Worlds until I was 25 (10th place in 2016), and nowadays that is unheard of. You get to a point where, I was in the rough for a while, and I didn’t think that things like that were possible. I surprised myself and worked hard, and no one can take that away from me. I feel so blessed and honored. I will say that I have a lot ahead of me, and you can use your imagination as to what that will be.”

Jason Brown struggled with his jumps to finish in sixth in the long, and slid from third to sixth place overall (253.68). At 23, Brown was the defending bronze medalist, having won in 2015, and he was coming off of finishing sixth in the Grand Prix Final.

“I need to move forward with the most positive attitude I can,” Brown said. “The (Olympic team) decision is out of my control. I did everything I can to prove I am a contender. The whole season, I put out strong performances and have been consistent and solid. I don’t think about what others are doing. I really put my heart out there, and I do it for the crowd as much as I do it for myself. I love to perform. I wanted to give them so much more.”

U.S. Figure Skating announced today that Chen,  Rippon and  Zhou would compete as part of the U.S. Olympic Figure Skating Team at the 2018 Olympic Winter Games in PyeongChang, as well as the 2018 World Championships. Brown, Max Aaron, and Miner were selected to compete at the upcoming 2018 Four Continents Championships.