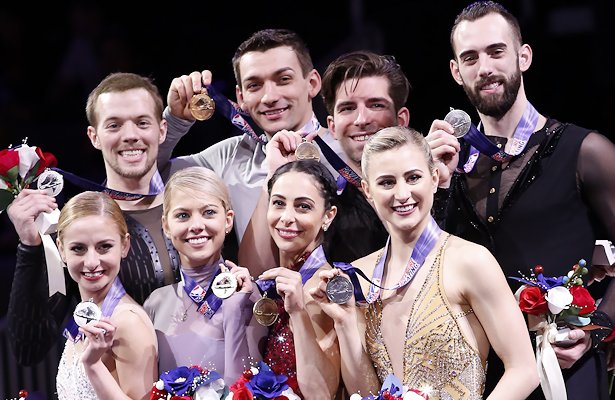 Alexa Scimeca Knierim and Christopher Knierim will be grabbing the lone pairs spot on the U.S. Olympic team after the married couple won the 2018 U.S. National Figure Skating Championships on Saturday in San Jose, Calif.

The Knierims posed concerned looks on their faces exiting the ice, as they took a fall on a triple Salchow and also doubled a triple toe, but their score of 206.60 (135.50 in the long program) was enough to overtake silver medalists Tarah Kayne and Danny O’Shea (200.80 total, 131.87 long program). Deanna Stellato-Dudek and Nathan Bartholomay won the bronze medal with 197.65 points.

Skating to the soundtrack of Ghost the gold medalists scored highly on an opening quad twist lift, and later, a solid throw triple flip and strong lifts, to secure their second U.S. championship, having won in 2015.

“It wasn’t our best skate,” admitted Christopher, 30. “We have a lot of strong elements that help us stay up in points, but we still need to get better in future competitions. We’re in a much better place now than in the Grand Prix series, and from where we’ve been, we are much better in practice. Everything is starting to come together.”

Having missed last season’s nationals due to injury, the Knierims finished 10th at the World Championships last spring at Helsinki. During the fall Grand Prix season, they were fifth in both Skate America and the NHK Trophy. This was also their first U.S. Championships since their June 2016 wedding, and now they will have the memory of skating in the PyeongChang Games to share with their potential future children.

“I have had more of a relaxed approach to this event as opposed to competitions prior,” Alexa said. “I did not have that feeling of wanting to celebrate leaving the ice because I knew I made mistakes and I was unsure of our scores. I was concerned whether we would win or not. I came here wanting to make the Olympic team, and to say I came here not wanting to be the champion, would be a lie. It was very important to me.”

Now the Knierims face the task of winning a medal at the Olympics, something a U.S. pairs team has not done since Jill Watson and Peter Oppegard won bronze at Calgary in 1988.

“I don’t think people are going to change their mind unless we win a medal,” Alexa said of the low expectations of U.S. pairs when competing internationally. “We’ve had teams at the World Championships be top seven or six before, and it didn’t change anybody’s minds about us. Hopefully, we’ll have a good showing.”

“I am so proud of my partner and how she has grown in the past month,” O’Shea said. “We have only been doing all of our elements for two weeks before Golden Spin. Her right knee is used to pick in those elements. Since then, we have had a little more time to feel comfortable and confident with our programs. That showed with our program this week.”

Kayne and O’Shea are coming off winning the bronze medal at Golden Spin on the ISU Challenger Series in Zagreb, Croatia, last month.

“We love Swan Lake, it’s my favorite ballet,” Kayne added, “so I hope everyone enjoyed the work we put into it. At Nationals, there is nothing to hold back. You are already at Nationals, why would you hold back? At Golden Spin, it didn’t go well because I was afraid. I can’t be thinking ‘Is my knee going to be OK?’ That is not part of the process. Now, I can’t be in doubt. My coach, Jim Peterson, said ‘One element shouldn’t affect Swan Lake. It’s one stroke of the painting, not the whole thing.'”

Stellato-Dudek and Bartholomay stumbled early on a triple Salchow and fell on a throw quad Salchow, before some energetic combination spins amplified the audience, during their U2 program. They improved on a fourth-place finish last season. The 28-year-old Bartholomay skated in the Sochi Olympics with Felicia Zhang, before teaming with the 34-year-old Stellato-Dudek, who might have the most-unorthodox road of any skater at Nationals.

“I am glad to be here with these two teams,” Bartholomay said. “Last year, we said we would go home and work harder to push the envelope of what we can do. When you do what you love, it makes it easier. We are happy with ourselves and this competition.”

A year and a half ago, Stellato-Dudek was working full-time as an aesthetics director at a cosmetic surgery practice in Chicago. She said she was on a work retreat, and all participants were asked to reveal something that yearns deep inside of them. She said she would like to win an Olympic medal and couldn’t believe that she still felt that way after all these years. She brought her old skates out of the closet, which she admits are much heavier than the ones used today, and practiced. Eventually, she landed with Bartholomay at the Southwest Florida Figure Skating Club.

“I still need to learn a lot about pairs,” the former singles skater said. “If I come out of my jump and I shimmy, he’s (Bartholomay) like ‘There’s no shimmy.’ I can’t change it on a whim. It’s only been a year and a half, but now I have a little bit of muscle memory.”

In their second year together as a team, Ashley Cain and Timothy DeLuc, who won bronze last year, finished fourth at this event (187.14).

“This was a really important skate for us,” said DeLuc. “Not just as athletes and skaters, because that’s what we train every day to do – to be the best athletes and skaters – but it really was an important skate for us as people. We wanted to step over the fear and anxiety that can sometimes hold you back when you want to skate freely. We know what we can do when we skate to our potential, and we didn’t do that in the short.”

“We love to compete, we love to improve, and anything the federation sees fit to send us to, you know we’re going to go back and keep working,” said Frazier. “And any time we can add a competition, it’s excellent experience, and it just keeps building for the all-around career that we want to put out.”

2014 Olympian Marissa Castelli was sixth with her new partner Mervin Tran, a Canadian who is working on obtaining U.S. citizenship.

U.S. Figure Skating officially announced today that Scimeca-Knierim and Knierim will be the pair team at theupcoming 2018 Winter Olympic Games in PyeongChang. They were also named to the 2018 Worlds team along with Kayne and O’Shea.