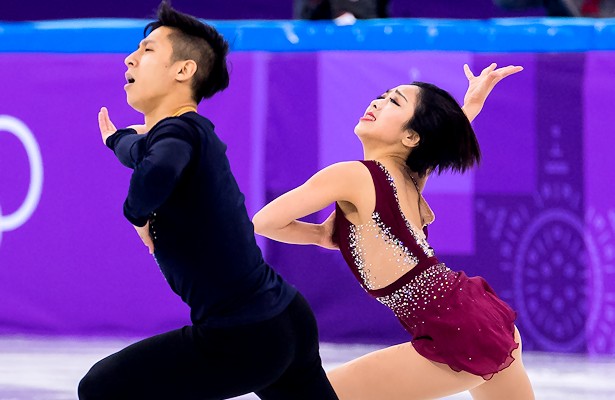 Wenjing Sui and Cong Han of China perform their Short Program at the 2018 Winter Olympics.

The Pairs event in Figure Skating at the 2018 Winter Olympics began with the Short Program on Wednesday morning with Wenjing Sui and Cong Han of China taking the lead, followed by Evgenia Tarasova and Vladimir Morozov (OAR) and Meagan Duhamel and Eric Radford (CAN).

Sui and Han were passionate, yet stellar, in their routine to “Hallelujah,” racking up positive grades of execution (GOE) on all of their elements. Their program featured perfect side-by-side triple toes, a throw triple flip, and level 4 on their twist, footwork and spins. The team earned a new personal best of 82.39 (44.49/37.90) points for a first-place finish.

“I was very emotional today,” admitted Sui, when asked about feeling pressure. “Even when I was putting on my make-up, I was already crying. I just felt very nervous. But after we got on the ice and finished our routine, I realized there’s all there is to it. Maybe we gave ourselves too much pressure, but as athletes and a representative of China, as long as you express yourself to your fullest, that’s all you can do.”

“We were in good shape today,” noted Han. “I think we reached our potential in the short program and it feels very satisfying. In a way, all the ups and downs we’ve been through to get here matches the emotions of the choreography of our routine pretty well.

The team missed the Olympics in 2014, but Sui said that “everyone who is able to stand here is a hero.”

“We missed the last Olympics and it was a hard journey to get here too. I had surgery in the process, so I really think that everyone who is able to stand here is a hero.”

“Compared to the veterans, we aren’t as experienced in handling our emotions for the competition,” said Han of his first Olympics. “As athletes we just have to prepare ourselves well and fight to be our best on the ice.”

Tarasova and Morozov were as equally as solid as the Chinese, with a throw triple loop being the only major different element in their program to music by Rachmaninov. The two-time and current European champions also scored a personal best 81.68 (43.97/37.71) and are currently second by less than a point at 0.71.

“Today our short program was good, all the elements went well,” noted Tarasova. “Tomorrow we’ll focus again like for a new program, a new fight, a new day. We’ll try our best.”

Duhamel and Radford gave an emotional, yet tentative routine to “With or Without You” in which Duhamel touched down with her free foot on the throw triple Lutz. They scored 76.82 (41.26 /35.56) for a third-place finish.

“We felt better than we anticipated yesterday when we came back to train,” said Duhamel on returning to the ice after winning gold in the team event. “Of course, you are on the highest high of your life and all of a sudden you are back down to reality and you need to compete again. So, I am really proud how we handled the practice yesterday and how we approached today. I really enjoyed the moment out there on the ice today and at the end of the day, that’s what we are going to remember most.”

Radford feels that competing three skates in less than a week are equally mentally and physically challenging.

“But now that we have this one under our belt,” said the 33-year-old. “We feel like this is right where we want to be. This was a really good short and we are really ready for the long program. It felt really, really good. It felt really in the moment and we maybe could have had a little cleaner elements, maybe some higher grades of executions on some things, but we are really, really happy.”

“The level of pair skating was extremely high today,” said Duhamel. “As pair skaters, we expected it because we’ve seen the depth of pair skating grow more every year. The level is unbelievable. The fact that you need to score over 63 to make the long program just shows that. Not too long ago, we scored 63 points and it got us fifth in the world in the short program. It shows the depth from all the countries around the world. A lot of depth and we’re only going to see that grow as the years go by.”

Aljona Savchenko and Bruno Massot were off to a good start in their jazzy routine to “That Man,” however, Massot doubled his jump on the side-by-side triple Salchows which cost them. They came in fourth with 76.59 (39.16/37.43).

“We tried to do our best, but mistake happened,” said Savchenko. “There is nothing we can do about it now. We have to look forward to the long program. There’s one mistake, so we cannot be happy, but it’s like this in sport.”

“It was not hard, physically at least,” said Massot on the jump. “I don’t know what happened. I had no back pain, I am absolutely fine. Technically, the jump was good. I could have done it. I will analyze that tonight so I won’t do the same stupid mistakes tomorrow. Tomorrow, we’ll have to give it (our) all.”

Massot acknowledges that a medal is still possible, but it might not be the gold.

“But we came for the gold, not for another medal,” he said. “These are the Olympic Games that happen only every four years and I cannot accept that I have made this ridiculous mistake. It is not over yet, but we dreamed of gold, not of silver or bronze. I wanted the gold as well, but more for her. I don’t want her to come home with another bronze medal.”

Xiaoyu Yu and Hao Zhang came in fifth after delivering an elegant routine to Swan Lake which was highlighted by their level 4 triple twist and throw triple loop. The Chinese champions earned a new personal best of 75.58 (42.10 /33.48) points.

“I feel like I’ve been relieved of all the tension,” said Yu of their clean skate. “During practice and before the competition I was very nervous, very worried and scared because of the mistakes we had made during the team event. I just kept telling myself I need to focus on the rhythm, slow things down, be braver, relax myself and just try to comfort myself. After we skated a clean program, I felt really accomplished and happy. We just need to maintain this and fight for the best in the free skating segment.”

“Firstly, I really love figure skating,” said Zhang, 33, on staying motivated at his fifth Olympic Games. “What’s more, I feel like I’m still very young and still have room to do even better. My injuries have also healed, so I feel really happy. I just want to enjoy my fifth Olympics, perhaps even my sixth Olympics.”

Vanessa James and Morgan Cipres of France were sharp their bluesy routine “Make it Rain,” which featured clean side-by-side triple Salchows and a throw triple flip. The 2017 European bronze medalists finished in sixth place with 75.34 (40.67/34.67).

“I am very happy about the performance today because we did our best and the result is the result and there is nothing to regret on this program,” added Cipres. “I am proud of Vanessa and proud of us, because we just gave everything.”

Eighteen months ago, the French team made the decision to relocate to train under former pair skater John Zimmermann (2002 World bronze; three-time U.S. champion), and felt it was the best decision they have ever made.

“We were stagnant in our career where we were always fourth at Europeans or sixth to eighth or 10th in worlds and we didn’t want to keep giving so much energy, sacrifice and time for getting the same results,” James explained. We knew that we had to pass a cap to be on the podium. ”

“We did a lot of research,” she continued. “We were looking at some of the best coaches like Richard Gauthier (CAN), Bruno Marcotte (CAN), but they have a lot of high-level teams and direct competition in Meagan (Duhamel) and Eric (Radford). Then we thought of the American coach (Dalilah Sappenfield). They are very close and we didn’t want to create any problems either. We need to be a priority obviously. I remembered John Zimmermann who is very athletic. He wasn’t so graceful or balletic like the Russians. He was more our style and I thought he would be the best to bring our weakness to be our strength. It was absolutely correct and it’s working.”

Valentina Marchei and Ondrej Hotarek of Italy displayed lots of personality in their playful routine to “Tu Vuò Fà L’Americano,” not breaking character until they left the ice. The team was nearly perfect apart from a small mistake on the triple twist. They are currently in seventh place with 74.50 (40.36/34.14) points.

“The cheering from the South Koreans and North Koreans together for us was very helpful,” said Kim of the support of the crowd. First of all, there have been no inconveniences whatsoever to life in the South area. We could really feel the power and the energy of the Korean people.”

“We are very happy to skate in our first Olympics and compete with pairs from other countries,” added his partner Ryom.

USA’s Alexa Scimeca-Knierim and Christopher Knierim had to fight for several elements in their routine to “Come What May.” The team had a subpar landing on the triple twist, a step-out on the side-by-side triple Salchows, and a hand down on throw triple Salchow.  They scored 65.55 (34.18/31.37).

“‘Great job and happy Valentine’s Day,'” whispered Knierim to his wife and partner at the end of the program.

“Well we were soaking it in and we knew that today was going to be a special day for us,” said Scimeca-Knierim on being a married couple skating together at the Olympic Winter Games. “You never know if we will be back on Olympic ice again, so we promised each other no matter what happens, mistakes or not, that we were going to be present every single second and really soak in the moment.”

“It’s been a lot of fun,” said Knierim. “I think there is always pressure in competitions, but today there wasn’t any pressure. We did the hard stuff already and that was in the team event to make sure we did our job. Now this is the cherry on top, especially on Valentine’s Day, it’s a special thing. So we were just having fun and happy with how we skated.”

The Pairs event will conclude with the Free Skate on Friday morning.