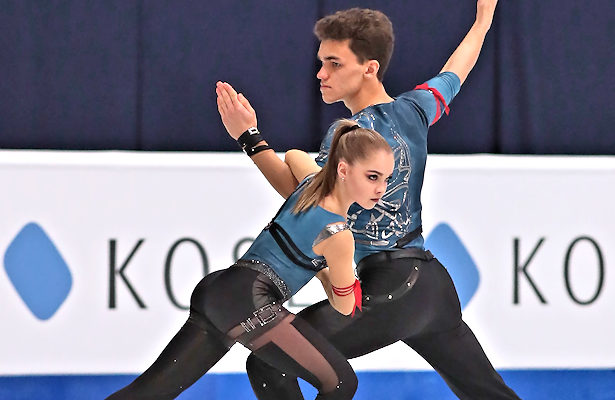 Russian pair skaters Polina Kostiukovich and Dmitrii Ialin have collected a silver and a bronze medal at the ISU World Junior Figure Skating Championships in the past two years and now have set their eyes on the top prize for the upcoming season. Following their vacation in May, the team started their season’s preparations at home in St. Petersburg at the end of May and are currently attending a training camp in Sochi.

Kostiukovich, 16, and Ialin, 20, feel that they have grown as skaters over the past several months, in part due to new permanent choreographer Denis Lunin, a former ice dancer.

“Denis Sergeevich (Lunin) joined our team not long ago (in January) and I think we started to skate better, feel the blade better,” Kostiukovich said. “What Denis Sergeevich contributes to our team is really cool, because we were lacking an expert in that area,” her partner agreed. “We worked with him on the details and the steps really became easier for us to do. It is good that we now have full-time expert for this on our team.”

“I think we’ll look more grown up in the new program,” Kostiukovich said. “We wanted to change the character, not wild animals anymore, but something closer to senior level skating.” The team had skated to a jungle-themed program the past two seasons.

“This program is completely different from what we used to skate,” Ialin pointed out. “It is not yet comfortable as we have to get used to it. We’re leaving our comfort zone, meaning we’re progressing. I have been listening to that music for about three years already. I imagined us skating to it and I wanted this music.”

The team stuck to a similar style for the new Short Program which is to “Smoke on the Water” performed by 2Wei. 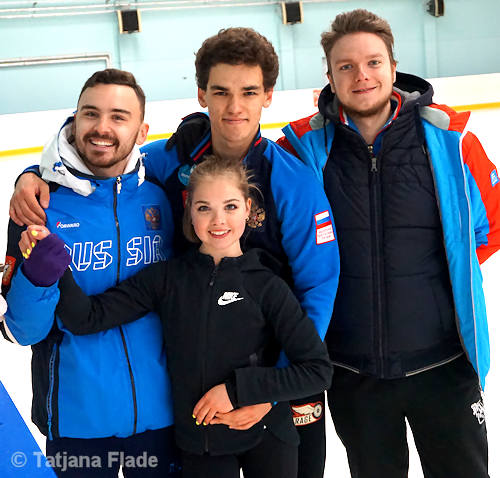 For summer training, the skaters are working on polishing and improving their elements such as the twist, death spiral and the pair combination spin.

This is where their ice dance choreographer comes in handy. “However, sometimes he gets carried away and we need the pair skating coach to step in and say, ‘stop, let’s do it easier, the guys are not ice dancers.’ He wants to do something really difficult, he has so many ideas and emotions. We’re trying step by step to take what he offers us.” Ialin observed.

The 2018-19 ISU Junior Grand Prix Final silver medalists used to do the quad twist in their long program, for example at Russian Nationals, but have put that element on hold for now.

“We did the quad twist and it went well, but then they lowered the base value and you get less for it than for a triple with positive GOEs. It doesn’t make sense doing it,” coach Vasilii Velikov explained. “Even if you do a decent one, you’ll get the same points as for a triple, and you’re spending a lot of energy and emotions on it.”

The skaters believe that they have also personally grown in the past season. “I think we are more confident, not just calm, but really more confident in competition,” Ialin said.

“I feel like I have grown up and it is even easier for me to live that way,” said Kostiukovich, who turned 16 during Junior Worlds. “Sometimes I behaved like a little girl that didn’t like something, that blamed others for everything, and now the relationship with Dima has improved, too.”

Ialin agreed: “Yes, it is easier to talk to her when she’s grown up. She’s a very emotional girl. When you’re working with her all day, it’s emotional, you chat, then you come home in the evening and everything is calm. When you’re on vacation or have a day off, you’re sitting there alone and you feel like something is missing. It’s Polina that makes sure there is enough communication all day long,” he explained with a laugh. No wonder the two of them stayed in touch during their vacation.

“I like in Polina and Dima that they are very emotional,” coach Liudmila Velikova said. “Even when they make mistakes, the live their program. They have now gelled as a team. Polina isn’t so unreasonable and Dima isn’t so quick-tempered anymore. They’re growing up in a good way and it is nice to work with them.”

Following Junior Worlds, their last competition of the season, Kostiukovich was busy at school with her 9th grade exams and then had surgery to remove a disc in her back that bothered her. “We counted the days, when is the best time to do it so that it doesn’t affect the season. On April 30 I had surgery and before that I passed all my exams,” she noted. Then she went on vacation in Turkey.

Ialin enjoyed some much needed time off as well. “After Junior Worlds, I let out all my emotion and I felt drained. I didn’t really want to do anything. I wanted just to relax and forget about figure skating,” he shared. He went to his hometown in Ekaterinburg to spend time with his family.

“I also had my studies,” the 20-year-old added. “I hadn’t done all the exams yet from the last session and I had an internship at a school for the current session. Everything went well and I arranged everything so that nothing was left and I can start training with a clear head. When there are some unsolved things, if from daily life or school, they might not disturb you, but in your subconscious you know that you have to do this and you cannot fully commit to something else.”

Kostiukovich and Ialin will focus on the junior level in the next season, but they also plan to test themselves at the senior level by competing in national senior events and maybe one or two Challenger Series events. The approach will be a bit different, because they felt that they lost momentum at the end of the past season.

“You need to keep it together (until the very end of the season),” Kostiukovich noted. “It’s an experience, the senior level skaters know about that, everyone went through it more than once.”

“At the beginning of the season everything went smoothly, but at the end there wasn’t enough energy left,” Vasilii Velikov added. “But that’s not severe. It just shows that you need to keep the focus from the beginning to the end of the season.”

“I believe they’ll do well in juniors and then Russian (senior) Nationals will be very important, because it depends on the result there what is going to happen the season afterwards,” Ludmila Velikova summed up.