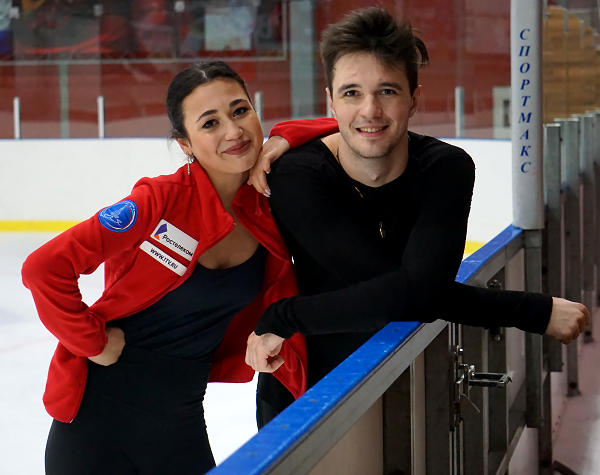 Russia’s Elizaveta Khudaiberdieva and Egor Bazin during practice at their rink in Balashikha on Sep 6, 2020.

Russian ice dancers Elizaveta Khudaiberdieva and Egor Bazin teamed up at the end of February last season but decided not to follow the usual pattern of a newly-formed team. Newcomers usually need some time to establish themselves as contenders, especially in ice dance. However, in September, they were invited to the prestigious Russian test skates for national team members and won their first competition ahead of the two more established teams Anabelle Morozov/Andrei Bagin and Sofia Shevchenko/Igor Eremenko.

Khudaiberdieva, 18, and Bazin, 25, were very happy with this result.

“We expected the three teams to fight for the top positions and to be close, so it was not completely unexpected that we won,” said Khudaiberdieva. “However, the difference in points was not big and we need to continue to work as we realize that our competitors also will work hard. It was really nice (to win). I wasn’t too nervous (in Syzran) because the test skates were just before; they were nerve-racking as a lot depended on them for us.”

Khudaiberdieva and Bazin are a really good match and complement each other well despite the age difference and the fact that Khudaiberdieva has not yet competed at the senior level. Bazin, on the other hand, has far more experience. He shared a 13-year career with Sofia Evdokimova in which the last three seasons included Challenger Series and Grand Prix events, as well as a European showing in 2019 where they finished ninth. Their biggest achievement was a silver medal at the Winter Universiade in 2019, however, Bazin wanted more, and the team split in March 2020.

Evdokimova had suffered serious back problems that hindered their progress, however, Bazin stated that this was not the reason for the split.

“I told her before that I have to do this (change partners),” said Bazin. “Then she had surgery and she thought it would be better and she can continue to skate, but it did not make sense in our case. It was a difficult situation with Sonia.” Nevertheless, the two are still on good terms.

Bazin’s long-time coach Oleg Sudakov already had a potential new partner in mind: Elizaveta Khudaiberdieva, the 2019 World Junior silver medalist with Nikita Nazarov. However, she left him shortly afterwards to skate with Andrei Filatov last season. They qualified for the ISU Junior Grand Prix Final, but then missed out at Junior Nationals and did not make the team for Junior Worlds.

“After Russian Junior Nationals, right after the Free Dance practically, Oleg Ivanovitch (Sudakov) suggested that to me (to skate with Bazin),” Khudaiberdieva recalled. “It was very difficult, because for me, everything was fine and I did not plan to change something. I didn’t have any problems with Andrei and it was also a risk to change the partner.”

Nevertheless, she agreed to the switch. 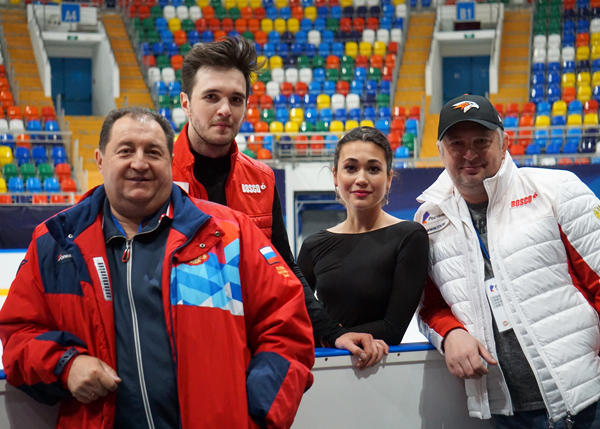 When they began training at the end of February, Khudaiberdieva and Bazin quickly realized that they needed time to adjust to each other.

“It was hard and it is still difficult,” Bazin explained. “Before the lockdown, we were able to skate for two weeks. We have a different technique; everything is different and it was really hard. We did everything step by step. At first, we just tried to skate together, then we tried to do some elements, then we built the program. We started skating parts of the programs and getting into shape and even that was different.”

Bazin also had to move from his hometown Toliatti to the Moscow suburb Balashikha, but he felt that was the smallest of all adjustments he had to make.

Khudaiberdieva felt it was difficult for her, because Bazin came from a different school than that of her two previous partners.

“Nikita and Andrei already skated in this group a year or a year and a half when we teamed up,” she explained, adding that they train in a different way. “Andrei already was used to it and to our schedule. We were skating in the first half of the day and that was it. Egor had training in the morning and in the evening. This is very different.”

“We had a different technique,” Khudaiberdieva continued. “Egor is significantly taller than my previous partners, so the positions and everything was difficult. We put together the programs very quickly. We did not get stuck, there were no problems with that, and we started to skate them. The elements alone work, but some transitions, connections… we were all over the place, because we were not gelled yet as a team. We had only been skating together for two, three weeks. Then we didn’t skate for three months because of corona. This made it harder, especially mentally.”

On July 1, the ice dancers, who are coached by Denis Samokhin, Maria Borovikova, and Oleg Sudakov, were able to resume on-ice training. For their Rhythm Dance, they selected music from The Artist soundtrack.

“We suggested the music ourselves. There is not such a wide range of musicals that are suitable,” Khudaiberdieva noted.

The Free Dance was an idea of the team’s choreographer Nikolai Nikonov. The music is mostly “Experience” by Ludovico Einaudi. In the middle, they use an instrumental version of the rap song “Ni**as in Paris” by Jay Z. and Kanye West.

“It is not about the music, but about the idea,” Bazin pointed out. “The story is that we are really old people that lived their whole lives together. At the beginning of the program, we start to remember our youth, how we met, got married, had a child, arguments, daily-life problems, and conflicts.”

“It is remembering the whole life,” Khudaiberdieva chimed in. “In the end, it is a farewell, the music is like in the beginning, we return to reality and in the end he leaves.”

Starting out as a new team, Khudaiberdieva and Bazin have set rather modest goals for themselves.

“We just need to establish ourselves as a team,” Khudaiberdieva opined. “It is not about the results; we need to gel as a team. It is a difficult situation in the world right now and this even plays into our hands a bit as the season is not a full one with international competitions. It is uncertain what will happen. For us this is a bit easier.”

“We want to show what we have done and that it wasn’t for nothing and that it looks good at a good level,” added Bazin. “The season is important, but, as Lisa correctly said, for us, the most important things are to gel as a team, to feel each other, and to please the audience.”

The skaters have set long-term plans and want to compete for four to six seasons.

“They are a new team,” coach Denis Samokhin. “Egor is an older partner, but he is healthy and strong and he has the ability. Their major goal is the next Olympic cycle, after the upcoming Olympic Games. Right now, we focus on skating together, working together. The more they can achieve even inside the country the better.”

Samokhin pointed out that the tough competition inside Russia makes it hard to predict what is going to happen and how they are going to fare.

“First of all, you need to qualify for the major events inside the country and we have many strong teams, obviously, that they need to compete with. For the next two years, the goal is to improve their skating and to be better than many other teams that come behind the two top Russian couples,” the coach summed up.

Khudaiberdieva and Bazin are currently scheduled to compete at the third event of the national Cup of Russia series this week in Sochi and have been preparing.

“We tried to add lightness (to our skating) for the Cup of Russia in Sochi,” Khudaiberdieva shared. “We’ve worked a lot on our physical strength as well as on the expression and on the characters of our programs. We’ve changed the free dance costume, so there will be a little premiere in Sochi.”