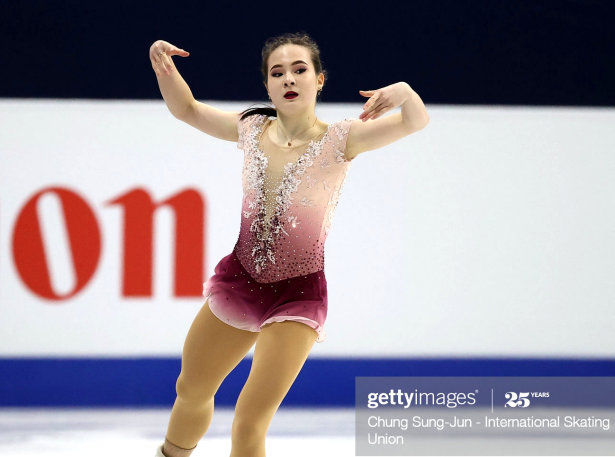 Emily Bausback was recently selected by Skate Canada to be part of the national team along with Alison Schumacher and Madeline Schizas for the 2020-21 figure skating season, and will debut in her first Grand Prix event later this month at 2020 Skate Canada International. Her goal is to skate two clean programs and place in the final flight (depending on how many skaters compete).

Last season, going into the 2020 Canadian Tire National Skating Championships, Bausback was aiming for a podium finish and a trip to either Junior or Senior Worlds.

“My main expectation was to deliver clean performances like I had been doing in training all season,” she recalled. “I knew the spot for the title was open, but I didn’t want to get my hopes up. Realistically speaking, I figured with two essentially clean skates, I could end up top three.”

In Mississauga, Bausback finished fourth in the short program with a score of 59.51—nearly four points from the leader. She then took first in the free skate (116.64) and won the national title with a total score of 175.54.

“It was the best feeling of my life!” the 17-year-old recalled. “Not only was I pleased with my delivery at this championship, the title was also a great result of my season. It was humbling knowing that I was able to preserve my momentum since my season began seven months prior to the national championships. In my opinion, being a champion is not only about peaking at the right time, but maintaining a steady progression and not having major fluctuations during the season.”

However, the journey to the 2020 national title was not an easy one. During the 2017-18 skating season, three weeks before what was supposed to be her senior debut at the 2018 Canadian Tire National Skating Championships, Bausback sprained her left ankle and fractured the bottom of her left tibia while landing a triple loop.

“I landed the jump, but I felt myself turning out, so I put my left foot down to stop myself,” she recalled. “I must’ve been turning as I put my left toe pick in the ice since I twisted and collapsed on my ankle. It was one of the most devastating moments of my skating career.”

“It was a long recovery,” she added. “I spent six weeks on crutches and took a break from skating for over two months. I was really upset because I was excited to compete at my first senior Canadians.”

The following season, Bausback finished 10th at nationals in what she attributed to an “interesting season.” Not only was the skater recovering from her injuries, she had also completely changed her eating plan.

“I became educated on proper nutrition and fueling for activity towards the end of the season,” she shared. “Nationals was the only competition that season where I felt that my body was in-shape and fueled for performance on the ice. I wouldn’t call my tenth-place finish a result from nerves, because in reality, it really reflected my season. I trained well going into the championship, but it was a transition period for me. I learned a lot from that season and nationals helped me turn the page and helped set up the following season.”

In addition to a disappointing 2018-19 season, she also saw where figure skating was going in terms of the Canadian senior ladies. The skater made a personal goal to not repeat the mistakes she made that year, adding that in a way, she felt that she had a “hit a personal low.”

“I thought to myself that I could only go up from there,” said Bausback. “With an optimistic mindset, I also began working more with my nutritionist and we developed a structured eating plan that I followed throughout the season. It became physically noticeable on the ice that I had the discipline to stick with my plan and I’m very proud of myself for that. As the season progressed, I became more and more in-shape and I believe that was a crucial part in my successes last season.”

Fast-forward to winning the title last season, the skater was selected for and competed at her first Four Continents Championships, where she finished 15th. The skater admitted that she felt a fair amount of pressure going into the event as a national champion.

“Truth be told, I was a little nervous since this was my first big championship,” the skater admitted. “This was the first event where I competed alongside some of the biggest names in the sport and watched top skaters compete live. It was an incredible experience! Moving forward, this recipe of handling nerves at such a high-caliber event will be carried to my future competitions.”

“I think a large majority of the pressure was self-inflicted, setting higher expectations of myself, as I should, competing against some of the top senior skaters in the world,” she added. “Nonetheless, the Four Continents was a valuable learning lesson and experience in dealing with nerves at a higher level.”

While Bausback had already met the technical minimum score (TES) when she competed earlier last season at Warsaw Cup, the International Skating Union (ISU) changed the TES later in the season. As a result, despite her win at Canadian Nationals, she had to scramble to re-achieve the score.

“I made a costly error in my short program at the Four Continents, but Skate Canada gave me another chance to achieve the technical minimum score by sending me to the Den Haag Challenge Cup,” Bausback said. “I was able to obtain the minimum score and I am forever grateful for that opportunity. Shortly after, my name was removed from the Junior World list and I was named to the Senior World Team!”

Then COVID-19, which had already reared it’s ugly head earlier in the fall, flipped everyone’s world upside down. It turned into a pandemic which affected everyone all over the globe. Jobs were lost, safety policies put in place, and competitions, including Worlds, were canceled. As a result, all athletes had to adjust their training, and Bausback was no exception. In addition to to doing Zoom classes with her coaches, she also turned to long bike rides, off-ice jumping, jump rope skipping, core workouts, and stretching at home.

Coach Joanne Mcleod didn’t feel that the online training was hard. In fact, she found it refreshing and even motivating to teach in a different manner.

“I have a university degree in Dance Arts, so I am very rehearsed in teaching floor bare and dryland classes ,” she said. “I also incorporated dynamic stretching, flex stability, and plyometric exercises along with airborne  rotation techniques.”

The part that McLeod found difficult was seeing her students on zoom in a “tight home space.”

“I also found it hard to not grasp real connection of their feelings in the moment of time,” explained the coach. “Our sport is so much of feeling good and just the expression of that joy. My elites missed training, each other, normal life, competitions, and connections.”

“In Vancouver, there are many bike trails around the city,” said Bausback, regarding staying in shape. “I love biking across the city on both off-road trails and on the road. The furthest round-trip cycling I’ve done so far is 64km. The main core workout exercises I focused on were push-ups, crunches, and planks. Planks are very important for this sport as they are comparable to being in the air.”

These are unique and uncertain times, however, Bausback would like to continue to train triple Axels, and possibly a quad, if time permits later this season.

“Having a triple Axel or quad is absolutely necessary to adapt in this ever-changing sport,” she noted. “For me, I don’t see that jump far off as Axels are one of my jumps with great potential. I definitely see myself getting close to rotating a triple Axel in the foreseeable future. They are definitely on my “to-do” list!”

When asked, Bausback revealed that she felt the triple Salchow is her “nemesis” jump, but she loves the triple Lutz and triple flip-triple toe. Her favorite non-jumping element is is the flying camel and enjoys doing the layout position which makes her feel “upside down.”

“Emily’s return to ice was relatively smooth,” McLeod offered. “It was more getting her knee action and timing for triple -triple combinations. We eventually started the triple Axel and she loved that jump!”

McLeod spends many months searching for she feels is the best music that suits the skater, who likes fun, perky, and emotional pieces. The coach had several selections and the two sat down together and listened for options. This season, the skater will be skating to “The One I Love” by Ellen Krauss, choreographed by Lance Vipond for the short program. The free skate is set to “Alla Notte (Adagio)” by Miriam Stockley and was choreographed by McLeod and Neil Wilson.

“We both decided that the music selection for my short and free program would mesh with my skating style and had potential for me to grow with the programs,” said Bausback. “The version of “The One I Love” has a warming feel and is uplifting. My short music has a melody and the lyrics are powerful and inspiring. My free program music is very spiritual and performing my program gives me an ‘otherworldly’ feeling. I’m comfortable with skating to lyrics. My new free program music is sung in Italian and I’m learning and working on how to connect to a song where I don’t necessarily have a full understanding of the lyrics.”

McLeod values her editor’s input (Hugo Chouinard from Montreal) when it comes to music. She pointed out that “he understands what I want within the musical story and brings creative additions  to each edited composition.”

“I spend a lot of time on music research,” added McLeod. “I don’t believe in skating someone else’s recycled  story. To win, you must be unique and interesting, not just technically brilliant. Having a long-term relationship with Emily better guides me to shadow musical choices suited for her personality and ability.”

When not training, Bausback has been binge-watching The Office and attending university online. She is currently enrolled in two courses in the Kinesiology program. She also enjoys spending time with her friends and doing interesting adventures when she has a free day.