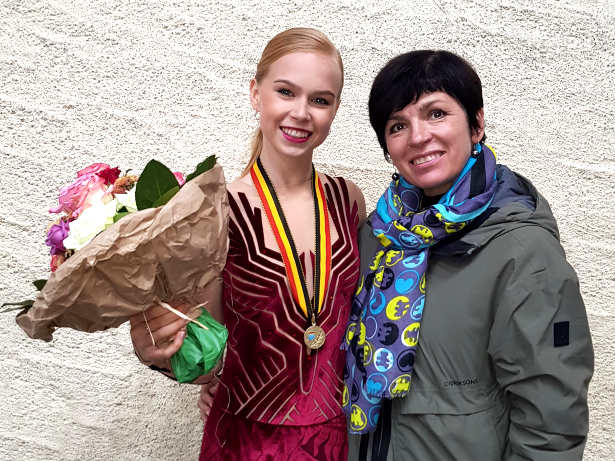 Estonia’s Eva-Lotta Kiibus had a strong start for the 2020-21 figure skating season, winning the Nebelhorn Trophy in Oberstdorf, Germany, at the end of September. She followed up with second-place finish at the Budapest Trophy in the Hungarian capital in October. The national champion is now headed to Moscow for the ISU Grand Prix Rostelecom Cup which is scheduled to take place November 20-22.

“It definitely wasn’t an easy skate. I had a good fight, but I’m happy that the fight I did deserved the gold medal,” Kiibus said about her victory at Nebelhorn Trophy. “I’m very surprised and happy for winning this competition. It means a lot to me.”

The 17-year-old felt that she had progressed by the time she competed in Budapest where she scored a new personal best in the short program and total score.

“With the short program I was really pleased, I managed to do almost everything like I should. And the points showed it,” she noted. “The free program wasn’t clean at all, but it was a bit better than at Nebelhorn. Overall, I was happy with my result.”

“I was really sad, and disappointed,” Kiibus recalled, regarding the cancellation of the event. “Everything really turned upside down.”

Disappointment turned into excitement when Kiibus learned last week that her federation was able to get her assigned to Rostelecom Cup instead. Apart from skating clean, her focus is  “to be able to enjoy being there and try not to focus only on jumps.”

“So now we a preparing for that,” said the athlete, who is looking forward to her trip to Moscow where her long-time coach Anna Levandi (nee Kondrashova) is originally from. “I am excited because it is a first time experience for me. I expect the competition to be a really high level, which is good! I feel good, I am doing my thing, and trying to show my best.”

“We were upset about the cancellation of the Grand Prix in France; therefore, we are very grateful to our federation that did everything so that Eva-Lotta got the Grand Prix in Moscow,” Levandi added. “We realize that it won’t be easy in Moscow, but we are happy about this opportunity nevertheless.”

Russia is now the hotspot in Ladies’ figure skating, but Kiibus hopes to leave her mark and to prove that Ladies’ skating exists in Europe outside Russia.

The skater has two new programs, both choreographed by Frenchman Benoit Richaud. Kiibus was lucky that she was able to attend a training camp in Courchevel, France, in the summer, and to work with Richaud there. Together, they chose the “Sign of the Times” by Harry Styles for the short program and Sergei Rachmaninov’s “Piano Concerto No. 2” for the free skate.

“I adore Harry Styles,” Kiibus shared. “I love to listen to his music and especially that song—it has a really deep meaning.”

She feels connected to the music to her free skate.

“I especially enjoy the part in the middle of my step sequence,” said Kiibus. “That is the moment when I can really show how much I love skating, smile the hardest I can.”

Skating came into Kiibus’ life when she was four years old. She first started out roller skating with her older brother, then her mother took her to an ice rink.

“My parents didn’t know much about figure skating, but they saw that I seemed to enjoy skating and they thought, ‘why not try to put our daughter into figure skating?’ and here I am,” she said with a smile.

Two years later, she joined the training group of Levandi, who was an accomplished skater herself, winning medals at the European and World Championships in the 1980s.

“Eva-Lotta did not stand out with talent, but she always has been a cheerful and energetic child,” the coach recalled. “She set herself apart from the other children with her infectious emotionality and her dance abilities.”

At the beginning, skating was just a fun pastime for Kiibus.

“When I started skating, I didn’t really think about it as a training, as a hard thing that I do,” she said. “I was just enjoying it and it was fun. I wasn’t as good as the children at that age right now. I didn’t do these kinds of jumps, but I enjoyed it very much. Later on, it got serious. I started to do some difficult jumps and understood that maybe I could do something more.”

When she was in her early teens, Kiibus realized that she had the potential to achieve something in the sport.

“I think I was 12 or 13, when the first double Axel and the triples came and I saw not everybody could do that,” she recalled. “I had something in me that wanted to go further, wanted to do more triples and more and more. I saw that I needed to train for that more and that was kind of the moment when I realized that I want to train harder and I want to become successful.”

The skater feels that her personality goes really well with her astrological sign Capricorn.

“I am stubborn and hard-working and really emotional,” Kiibus revealed. “I tend to be really critical with myself.”

Levandi agreed and said that she really enjoys working with Kiibus: “She is that kind of person that you cannot force. If I want something from her, I need to explain it to her and then she will work very dutifully on herself. She is very goal-oriented, disciplined, demanding to her herself, and of course, hard-working.”

When asked who her skating idols were, Kiibus paused for a moment.

“That’s a hard question,” she responded. “There are a lot of skaters that I enjoy watching and for many reasons, like Carolina Kostner. She skated for so long. She wasn’t just for two years at her peak and then nobody knows. I think I kind of want to be a bit like her in that point, to be able to skate as long as I want. Of course I look up to my coach, I look up to myself, when I do something good, then I watch myself and I’m proud of myself and that’s the kind of power that nothing else can give you more. Realizing that ‘Wow, I did that and that was good!'”

Levandi feels that the one of the strengths of her current top student is beauty.

“Beauty in everything,” the coach stressed: “The way she looks, the way she moves, and how she can speak and express her thoughts is beyond her age. She is an intelligent athlete throughout.”

The coach sees one weakness in her skater—that she can take quite a long time long to learn new elements.

“Maybe this is because she is thinking too much,” said the Levandi, “if you can call that a weakness. But once she masters an element, she knows exactly what she needs to do for it to work out.”

Kiibus, who ranked seventh in her debut at the 2020 ISU European Figure Skating Championships, has set her goals on improving everything in her skating.

“I want to be better at every competition,” said the skater, who was also scheduled to compete at the 2020 World Figure Skating Championships before they were cancelled. “I want to improve a bit at a time, not only in jumps, but in everything.”

“This year it became especially palpable that Eva-Lotta is focused to the max on achieving results,” Levandi observed. “She now lives in figure skating and in school, and this gave results right away.”

It is in the plans of coach and student to go with the newest developments of Ladies’ skating and they are now working on the triple Axel and quad Salchow.

“So far, we train with the harness,” Levandi revealed. “I cannot let her get injured. I have been bringing her up for 12 years.” Nevertheless, they are working on making the programs harder. “The goal for this season is the same as in the past and in the future years—to give 100 percent in both programs at the major events of the season.”

Thus far, the season is full of uncertainty due to the pandemic. Nobody knows which competitions will actually happen or which ones will be cancelled at any given moment. Kiibus tries not to let herself be affected too much by this situation.

“There’s nothing I nor we can change, so I just continue to train and to get better, hoping to be able to compete,” she said.

“We are hoping for the best,” added her coach. “Everything will be fine. We just need to believe in it.”