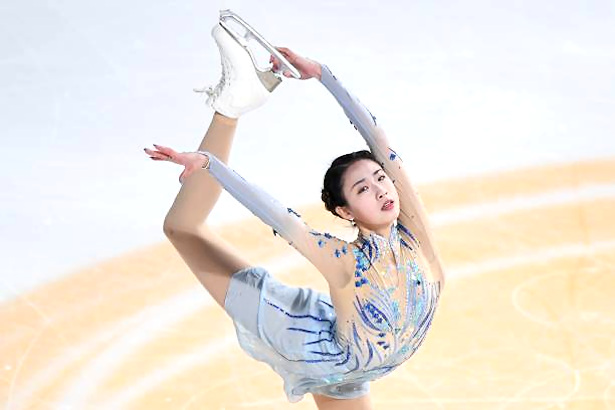 Hongyi Chen performs her free skate at 2020 Cup of China in Chongqing, China.

Hongyi Chen maintained her overnight lead to win the gold after the ladies concluded with the Free Skate at  2020 Shiseido Cup of China in in Chongqing on Saturday. Angel Li and Minzhi Jin, both of whom are making their Grand Prix debut, finished second and third, respectively.

Performing to “I Have the Strength to Fly” by Xiaoduo Cheng, Chen opened with a triple Lutz-Euler-triple Salchow combination followed by a triple toe-double toe. The national silver medalist continued with a triple loop and triple Lutz, but slightly two-footed the triple flip-double toe. The only major error came when she popped an Axel, but the skater was rewarded with level 4s for all spins. She earned 121.90 points for the Free Skate and 186.5 for a total score.

“I am not completely satisfied,” the 18-year-old said afterwards. “I regret that I did not go for the triple-triple in my second jumping pass and I missed one Axel. I felt a little tired. I want to improve my technical difficulty and my performance skills. Before coming here, I adjusted the programs, the elements, the steps to find what suits me best. My next competition will be in December, so there is still some time to improve.”

“The music of my free program is Chinese style,” Chen added. “When we were looking for music with Lori (Nichol), we tried to find the music that fits me, especially with the 2022 Beijing Olympics Game coming. Now I feel like I’m doing better than before, but there are still room to improve and details to polish.”

Li’s performance to “Song for the Little Sparrow” and “La terre vue du ciel” was highlighted by a triple Lutz-double toe, triple toe-double toe, and triple toe-Euler-double flip. The 15-year-old from Shanghai fell on a triple Lutz, but was awarded level 4 for all three spins to score 98.39 points in the Free Skate and 148.33 overall.

“I regret that I fell on my second triple Lutz,” Li said. “When I get back home, I will focus on my physical strength. I would like to focus on my skating skills and making my skating lighter and look easier. It was a unique opportunity for me to compete here and I tried my best. I learned a lot.”

Jin, who turns 17 next week, landed a triple toe-double toe, triple toe, and two double Axels in her routine to “Fiamme” by Roberto Cacciapagila. The skater, who is coached by Ciashu Fu, finished fourth (87.68) in the Free Skate, but was able to hold onto third overall with a total of 135.43 points.

“I also made a small mistake and popped a jump, but overall, I performed up to my level,” said the skater from Beijing. “In the future, I would like to bring the full package and also improve my skating skills.”