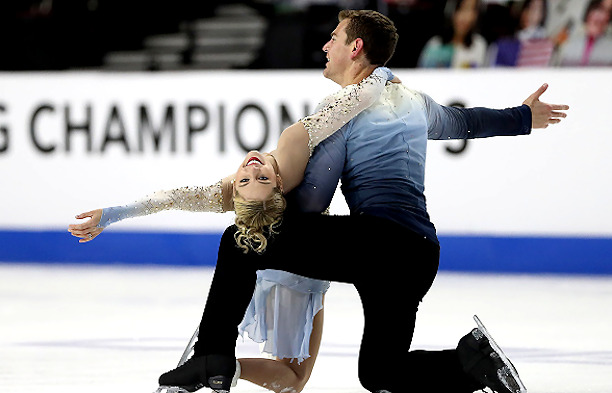 Alexa Knierim and Brandon Frazier took their first title together as team on Saturday night at the 2021 Toyota U.S. Figure Skating Championships in Las Vegas, Nev. Jessica Calalang and Brian Johnson captured their second consecutive silver, while Ashley Cain-Gribble and Timothy LeDuc rose from fourth to claim their second bronze. Frazier has won the title before with former partner Haven Denney (2017), while Knierim won it three times with husband and former partner Chris Knierim (2015, 2018, & 2020).

Knierim and Frazier were strong in their skate to “Fall on Me,” opening with a good level-four triple twist. The landing of the side-by-side triple toe-double toes were a bit tight, but the triple Salchows, throw triple loop and throw triple flip were solid. All three lifts earned a level four, as did the pair combination spin, and the new team finished first in the free skate with 150.64 points. Their overall score was 228.10—nearly 23 points higher than their closest competitors.

“We’re elated with our performance!” said Knierim. “It was a fight for us out there, but we are very proud of what we put out there and are excited for the future.”

“There were several elements like the death spiral that got real tight,” explained Frazier. “Towards the end our second lift didn’t have a good ‘up’ so that was a fight there, I wasn’t balanced well. Going into our choreo steps, a lot of emotions were going through us at that point. It was a long week and the body gets tired and we both just really had to reach down deep and push through it.”

“We’ve been putting out really great programs at home and there’s an ease to them most times,” added Knierim. “Today, the explosive elements, I had to kind of reorganize myself in the air and really be alert for my landings. So that’s what I mean regarding fighting.”

Knierim and Frazier began their partnership in March 2020, and six months later, made their first appearance in competition at 2020 Skate America where they won gold. While they were pleased with this win, they both acknowledged that there was still very much work to do.

“We have a lot of cleaning up to do and a lot of things that we can do better,” Knierim pointed out. “We strive for more every day. We want to be among the best in the world and we have a ways to go.”

Calalang and Johnson opened with an excellent level-four triple twist that garnered 5+ grades of execution (GOE) across the board. They struggled on their side-by-side jumps: she under-rotated and he put a hand down on the the triple Salchows, and then she fell on the triple toe combination. The final lift was graded a level one, but the throw triple Lutz and throw triple Salchow were solid and the death spiral and pair combination spin earned a level four. The 2020 Skate America silver medalists scored 133.99 for third place in the free skate, and with a total score of  205.29, were able to maintain second place overall.

“There were quite a few mistakes in the program, but we really tried hard to put them aside and continue the performance strong,” said Calalang. “We know what we need to work on when we get back home for next season.”

The team had a break-out season last year, and while they were disappointed with their performance at this event, they acknowledged the hard work they had done on their expression, skating skills, and stamina.

“All that stuff was done really well,” said Johnson. “So even though we might not have been the happiest with it, we definitely in our minds also showed improvement in many ways and we are looking forward to adding on to that.

Cain-Gribble and LeDuc produced a triple twist, throw triple Lutz, and side-by-side triple Salchow-double toe-double loops in their routine to “Piano Concerto No. 2” by Rachmaninoff. He fell on the side-by-side triple loop while she turned out the  landing on a throw triple Salchow, but the rest of the program was clean. Two lifts and the pair combination spin was graded a level four and the 2019 U.S. champions finished second in the free skate with 134.71. Their total score of 200.52 was enough to move them up from fourth to the third spot on the podium.

“I know that we had a few mistakes in the program, but for us it felt like a huge wind coming off the ice, feeling like Ashley and Timothy,” said Cain-Gribble. “It’s been a long time since we felt that way. We felt like numerous times we were looking on the outside at ourselves, and this time I felt like were fully engaged in the performance and every piece of the choreography. We gave it everything we had. We chose not to stand in our way today and just let ourselves skate freely.”

“Our takeaways on the season as a whole, I think there is an overwhelming sense of gratefulness that we are even here,” said LeDuc. “US Figure Skating has put in the work for us to be able to compete in the period of time that we in in the world. That we got to have a season, got have to move forward and grow as teammates with everything going on right now.”

“The long program today we put out more of what of we do in practice every single day, said Cain-Gribble. “I felt like the Short Program didn’t. We’ve improved in so many ways, but we’ve held back a little bit in competition this year. I think today showed us what we are capable of, so it was a win in that sense.”