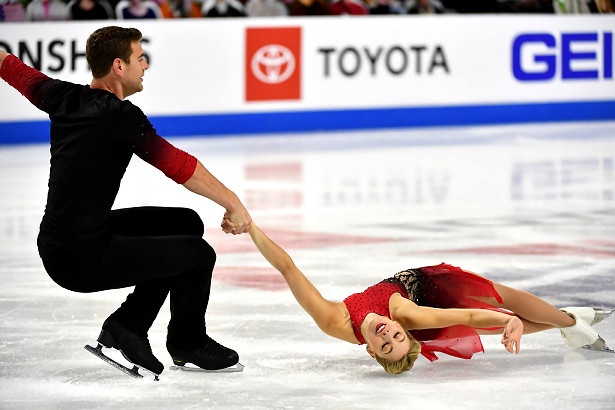 Alexa Scimeca Knierim and Brandon Frazier, who paired up less than a year ago, made their national debut in Las Vegas on Thursday at the 2021 Toyota U.S. Figure Skating Championships.

In their debut together as a team, Alexa Scimeca Knierim and Brandon Frazier took the lead in the Pairs’ event at the 2021 Toyota U.S. Figure Skating Championships in Las Vegas, Nev. at The Orleans Arena on Thursday afternoon. Jessica Calalang and Brian Johnson are currently in second, followed by Audrey Lu and Misha Mitrofanov.

Scimeca Knierim and Frazier produced a solid level-four triple twist, triple toe, and throw triple loop—all of which received positive grades of execution (GOE), in their dynamic routine to “In the End” by Tommee Profitt and “Too Far Gone” by Hidden Citizens. The 2020 Skate America Champions, which began their partnership less than a year ago, also received a level four on the death spiral, change-foot combination spin, footwork, and lift. The skaters lit up with smiles, squirms, and words of encouragement to each other in the Kiss & Cry when a respectable score of 77.46 was revealed.

“Brandon and I are really proud of our performance today,” said Scimeca Knierim. “There’s some areas in that program that we can improve on and do better, but we’re quite pleased with how we held ourselves today. We are going to enjoy this moment and reset and focus for the free skate.”

“After Skate America, Alexa and I went right back to work and tried working on things to improve  our performance,” said Frazier. “Technically, I think we made some better strides this time around, but there is still room for improvement. Overall, we are happy that we are seeing the progress each time we get out.

Calalang and Johnson put out a dramatic routine to “Light of the Seven” from Game of Thrones which featured an excellent level-four triple twist that garnered +5 GOEs across the board. The only major error came when she went down on the side-by-side triple Salchows. Calalang also fought for the landing of the throw triple Lutz, but the death spiral and footwork were graded a level four and the 2020 Skate America silver medalists finished in second with 71.30 points.

“Brian and I agree today that our program today was a little bit of a fight, but we are just going to put that past us and look forward to the free skate,” said Calalang.

“Our performance today wasn’t really our best; I believe we skate a little bit better at Skate America,” said Calalang, when comparing their performances. “In between Skate America and the US Championships, we focused on the overall package, fine details, technically working on each element, and honed in on consistency.”

Opening with a level-four triple twist followed by solid side-by-side triple Salchows and throw triple loop, Lu and Mitrofanov looked confident in their performance to “The Show Must Go On” from Moulin Rouge! The lift and change-foot combination spin were both graded a level four and the 2020 Skate America bronze medalists sits in a close third with 69.56 points.

“We are very happy with how we skated today, but then again, it’s only the short program,” said Mitranov. “There’s always the free skate, so we will keep our heads down and continue fighting.”

“The biggest thing we’ve been working on is connecting to each other and to the judges and the audience,” he added. “We’re hoping it was a bit better today than at Skate America, and we’re trying to push forward on the second mark.”

Skating to “Never Tear Us Apart” by Bishop Briggs, Ashley Cain-Gribble and Timothy LeDuc opened with a huge level-four triple twist, but she went down on the side-by-side triple Salchow and two-footed the throw triple Lutz. The 2018 Four Continents silver medalists recovered to produce a level-four lift and change-foot combination spin and are in fourth place with 66.02 points. They were clearly disappointed with their performance.

The Pairs’ event will conclude on Saturday with the Free Skate.