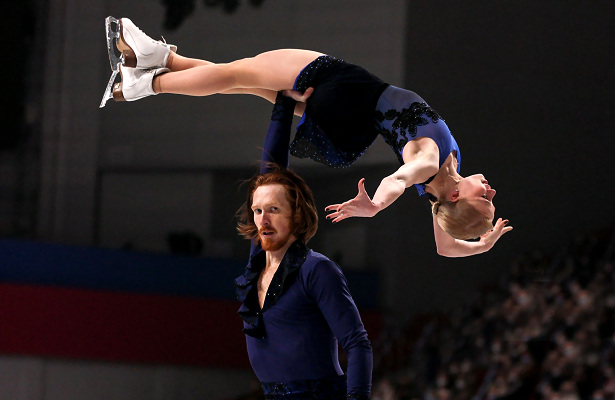 Ever since Russian pair skaters Evgenia Tarasova and Vladimir Morozov began competing on the international senior level during the 2014-15 season, they have been among the best of the world. They have collected six consecutive medals at the ISU European Figure Skating Championships, two of them gold, as well as three medals at the ISU World Figure Skating Championships in. They were fourth at the 2018 Winter Olympics.

During the past two years, however, the team from Moscow has struggled with their confidence and consistency. The technical elements used to be their strength, but they made mistakes on jumps and throws. As a result, Tarasova and Morozov lost their European title to France’s Vanessa James and Morgan Cipres in 2019 and then lost to their up-and-coming teammates Aleksandra Boikova and Dmitri Kozlovskii at Russian Nationals and Europeans in 2020. Last season, they failed to qualify for the ISU Grand Prix of Figure Skating Final for the first time since turning senior.

The team appeared to have lost momentum and were overtaken by the next generation of young and strong pairs in Russia. During quarantine, and when the season finally started, the two-time World silver medalists, who partially train in the USA under Marina Zueva, dropped off the radar.

Nevertheless, they resurfaced—first at the Russian Cup event in Kazan, followed by the recent Russian National Championships, where they appeared looking refreshed and confident. Tarasova and Morozov reclaimed the national title and made only one major mistake when Tarasova fell on the throw triple Salchow in the Free Skate.

This is even more impressive considering that Tarasova was sick with pneumonia, likely as a result of contracting COVID-19 in Kazan at the fourth event of the national Russian Cup series mid-November.

“The competition in Kazan ended and we returned to Moscow on Thursday. We trained as usual for a week,” Tarasova recalled. “Then on Monday, after training, I started not feeling very well. I came home and measured my temperature. I had 38.3 (Celsius fever) and I was upset, because I never had such a high temperature. But I didn’t have any other symptoms. The only thing was that I was coughing in Kazan.”

The temperature went down the evening of that day, but Tarasova felt pain in her lungs and was diagnosed with pneumonia. She was monitored by doctors and rested at home for two weeks. Then she was cleared to resume training.

“It was hard to get back into the training process,” Tarasova admitted. “I thought it would pass like a simple illness. The first week we did like one, two elements to make it easier, without a lot of physical exercise. It was quite ok, but when we started to do more in the second week, I really felt that I have no strength. I did the maximum of two elements and that was it. I felt bad and it was hard.”

She was grateful for the support and advice of Morozov, who had been sick with COVID-19 in September, which is why the team missed the first and second event of the Russian Cup series that they had planned to attend.

Tarasova and Morozov had three weeks to prepare for Nationals and they were proud that they made it.

“I am very happy that I was able to recover and we came to Russian Nationals,” said Tarasova. “We were really missing competitions this season. You are constantly training and you want to go out on to the ice and show something.”

The team had spent the quarantine at home in Moscow, then went to the training camp in Novogorsk when it opened in June. A month later, they traveled to Florida to train with Marina Zueva.

With Zueva, they built their new Free Skate to “Adagio” by Tomaso Albinoni in an interpretation by Kazakh singer Dimash Kudaibergen. In August, their other coach, Maxim Trankov, joined them and they changed the choreography of the program as they felt some of the elements didn’t correspond to the music.

“We did at the beginning a skeleton of a program, just the order of the elements, and then some steps,” Morozov explained. “When we had that sketch, we were looking at the entries into the elements, where it was comfortable and where not.”

It was Tarasova who had found this version of the music and revealed that they did not necessarily want lyrics. They wanted something new as many other skaters had used the piece before.

“Marina said, ‘have a look, maybe you find something with lyrics,'” said Tarasova. “I recalled that I saw how Dimash (Kudaibergen) was singing “Adagio” and I suggested this. She liked it and so we decided to do it.”

“We liked the ‘Adagio’ in the beginning, but a lot of people have skated to it,” Morozov added. “We had three versions of ‘Adagio’ and we listened to all three: one was Spanish by Il Divo, Lara Fabian, and Dimash.” The program has a romantic story, as Morozov shared: “It is about love. He loves a girl and she is close to him, but not materially. It is only her shadow that you are drawn to and try to meet and she is always close like a guiding star.”

The team kept the Short Program to Maurice Ravel’s “Bolero” from the past season.

In September, the couple returned to Moscow, but they were allowed to skip the Russian test skates as they planned to compete at the first two Russian Cup events. However, that plan fell through when Morozov got sick and they were not able to return to the USA either as initially planned as they had been invited to the ISU Grand Prix Skate America.

They stayed in Moscow and trained with Trankov, and then two weeks before their first competition in Kazan, recently retired single skater Sergei Voronov joined their team. He had offered his help and Trankov was happy to invite him.

“We tried it and we liked it,” Morozov said. “Until nationals, he already had considerable input and responsibility. Before, there were many errors on the jumps and technically he took care of that. We worked a lot on the jumps, spins, footwork, and all that. He helps us a lot with this and we are very happy to have him.”

The skaters have kept the training system and schedule they had when working with Zueva in Florida with two training sessions starting in the morning and a short break in between them so that they are done in the early afternoon.

“Our first practice is rather early,” Morozov pointed out. “At first, I never thought I could skate that early, but now it is normal for me. You get up at seven, have quick breakfast, and you are on the ice at 9.30 a.m. The evening is free and there is time to do other things and I like that.”

Tarasova and Morozov feel that they needed some time to adapt when changing coaches and starting to work with Marina Zueva in 2019. At first, this process led to more inconsistency in their performances.

“It is not like you always should be at the top,” Morozov pointed out. “We skated, we did the elements, but we didn’t have interesting programs and choreography. Therefore, we wanted to take the next step to impress the people and judges with our skating and character.”

“There was something for us to work on to create mature skating,” he continued. “That takes a lot of time and there is no formal score for it. This is not an element that you are doing, but you need to create the impression of the program as a whole and then it will be at a totally different level. We did a step back first, but then we moved forward.”

Their success at nationals has made them very motivated. “This gives us confidence that we are on the right track and that we made the right choice,” said Tarasova. “It is working and that gives us strength to go out every day to practice and to work even more and more.”

The now three-time Russian Champions are eager to compete again and hope to participate in a new event the Russian Figure Skating Federation plans at the beginning of next month. They also plan to compete at the Final Russian Cup, as well as the upcoming ISU World Figure Skating Championships, barring any cancellations.

“Everything is a bit up in the air,” said Tarasova. “We really want to compete, because half a year or half the season has passed and we did only two competitions and this is not enough.”