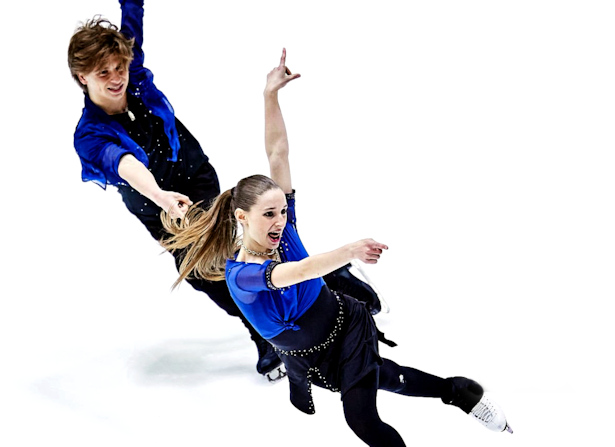 USA’s Oona Brown and Gage Brown danced to the lead at the 2022 World Figure Skating Championships in the Rhythm Dance on Friday in Tallinn, Estonia. Canada’s Natalie D’alessandro and Bruce Waddell are in second followed by teammates Nadiia Bashynska and Peter Beaumont.

Brown and Brown delivered a confident and energetic hip-hop routine to “How Ya Like Me Now” in which they produced level four twizzles and rotational lift, as well as very good level three midline steps. The 2021 JGP Courchevel II Champions earned many positive grades of execution (GOE) and scored a new personal best of 66.98.

“I am happy with the skate,” said Gage Brown. “The last time we competed was in October. Just to get actually out here and compete was an amazing feeling. We missed that feeling for six months.”

“It was a clean skate, it was strong,” added Oona Brown. “Maybe there were like little things here and there that could have been a little better, but I feel like today it was definitely a strong enough performance that we put out.”

Brown and Brown were forced to withdraw from nationals earlier this season due to COVID-19.

“It was a tough one,” said Gage Brown. “Obviously, the news when we tested positive was a nightmare. It was a day before we were supposed to leave and then we had to take ten days off before we could actually skate again. We were training off ice during that whole period of time, it helped. It took me at least a week to get into the groove of things. It felt like a long setback for me. She was fine, I had a difficult time. That was a new one and definitely it was a curve ball. We worked through it and I’m happy where we are now.”

“We are definitely very happy with our skate today,” said D’Alessandro. “Of course, we had a couple of technical lower levels, but overall, we put out today what we’ve been doing in practice and we felt like we pushed everything we could and that’s what we said to each other when we got off. We said I gave it everything and that’s something I think we are really proud of after this season.”

“We’re just really happy to be here,” said Waddell. “We had a blast!”

Bashynska and Beaumont showed good energy in their blues-and-swing routine which featured a level four stationary lift and twizzles. The 2021 JGP Cup of Austria bronze medalists earned many positive GOEs for all elements and scored a new personal best of 63.45 points.

“Honestly it’s insane,” said Bashynska. “I felt so in the moment. I kind of live for the feeling for performing for the audience, for the people in the crowd.”

“Coming to this competition, we didn’t have any expectations as a team,” added Beaumont. “We just wanted to enjoy it and let our skating speak for itself. We’re really happy with how that went.”

Germany’s Darya Grimm and Michail Savitskiy delivered an strong and confident performance. The national junior champions earned a level four on their first blues pattern steps, in which all key points were met, as well as the rotational lift. She received a level three for the twizzles, while he a level four, and they finished fourth with a new personal best of 62.47 points.

Angelina Kudriavtseva and Ilia Karankevich of Cyprus are very close behind with a career-best of 62.15. Their unique performance to “Ruby Blue” was highlighted by a nice level-four rotational lift and strong level two midline steps.

USA’s Angela Ling and Caleb Wein are in sixth (61.43) after a fun routine that was highlighted by level-four twizzles and rotational lift.

South Korea’s Hannah Lim and Ye Quan are currently in seventh (57.36) followed by Celina Fradji and Jean-Hans Fourneaux of France (57.36).

USA’s Katarina Wolfkostin and Jeffrey Chen lost valuable points after a fall on the twizzles and are in ninth place (57.05).

The Ice Dance event will conclude on Sunday with the Free Dance.