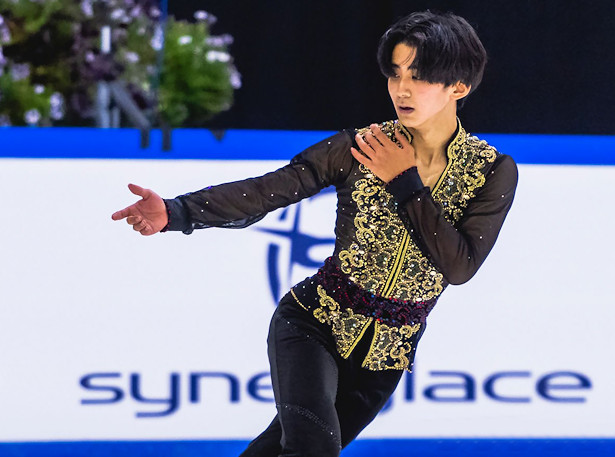 Japan’s Shunsuke Nakamura debuted on the Junior Grand Prix earlier this season, winning the gold in Courchevel, France. The 17-year-old from Kyoto, Japan, attempted a quad toe in the Free Skate but landed a too far back on his heel in the landing. Nevertheless, he landed a total of three good triple Axels and showed good level four spins in both programs, placing first in both segments.

“My first international competition was when I was a novice skater at the 2018 Asian Open Trophy,” recalled Nakamura. “I finished in second place and Ilia Malinin was in first place. I did not expect to get first place at my first Junior Grand Prix in Courchevel! I am very happy that I did!”

“I think I fell on my quad because I was very nervous and my movements became too stiff,” he admitted, regarding the jump in Courchevel. “I started working on my quad toe about a year ago. It is still only about ten percent. When I am in a good condition, it’s maybe around thirty percent. I will definitely keep it for the season!”

The skater began skating when he was five and followed his sister, Ayaka, into the sport. He currently trains under Mie Hamada, Hiroaki Sato, and Satsuki Muramoto at the Kinoshita Skating Academy in Kyoto.

“I was 14 years old when I landed my triple Axel,” said Nakamura. “At the time, I moved from Nagoya to Kyoto to learn from Mie Hamada. I started working on my triple Axel with her and it took me about four months to land it. When I am in a good condition, my triple Axel is pretty consistent.”

“In my opinion, his triple Axel has become very consistent,” coach Muramoto offered. “He lands maybe eight out of 10 times on his good days. He has been taking videos and working on fixing his bad habits with Mie. Once he is focused on doing something, he is very determined until he gets it done.”

This season, the 2022 Challenge Cup junior champion is skating to “El Conquistador” by Maxime Rodriguez for the Short Program which was choreographed by Cathy Reed.

“I chose this music with Cathy,” he revealed. “I really like how the music is very intense and has a dramatic change in speed. At the Junior national training camp, Zachary Donahue was there as a guest instructor and he helped me with the idea of fighting with a sword. I also have an image of a Spanish bullfight where I am the bullfighter/matador fighting the bull.”

His Free Skate, entitled “Shiek,” is composed of four different pieces: “Mohini (Enchantment)” by Yo‑Yo Ma and the Silkroad Ensemble, “Pentecost” from the motion picture The Bible composed by Hans Zimmer, “Napas” from Crossing the Bridge by Mercan Dede, and “Arabesque” performed by Nightwish (composed by Tuomas Holopainen).

“There are many pieces of music, so Tom (Dickson) decided to name my Long Program ‘Sheik’ because his image of this music was of an Arabic sheik,” Nakamura explained. “Tom decided the music for me. It is a very different type of music for me that I’ve never skated to before. I like it because the music seems very mysterious! Tom came to Japan in May and choreographed it in Kyoto.”

In terms of his skating overall, Nakamura feels his strong points are his “ability to express the mood or atmosphere of the music” and “the stability” of his triple jumps. The main element he wants to improve on this season is the quad toe.

“Mie is the main coach that works with me with my quad toe,” said Nakamura. “I train the quad by just doing the jump a lot. I also try it with the music many times so I can concentrate on landing of the jump. I take videos of myself doing the quad as well, so I can check my movements in detail in slow motion.”

“His speed has definitely improved in his skating skills,” said Muramoto. “I know he still needs to work on difficult turns, however, he has a natural glide to his skating which helps him with his speed naturally. Wining the Junior Grand Prix in France really helped boost his confidence and lit a fire in him to want to become even better. As a result, this determination is helping him improve on everything, especially the triple Axel and quad toe.”

“Besides the quad, I want also want to get a level four on my step sequence which I know is a dream,” he added with a chuckle. “I would also like to to receive level four on all my spins. I am working hard to make it happen!”

Muramoto stated that it would take time to achieve the level 4 on his steps since Nakamura is currently focuses on the triple Axel, quad toe and spins.

“It is hard to find time to really work in detail with his step sequence,” she said. “He has really been taking time to work on his spins and increased the amount of times he practices his spins. I believe he can get level 4 on all his spins in the future!”

One of his goals this season is to get 80 points on his Short Program and 150 points in the Long. He would also like to win Junior Nationals in November.

“Afterwards, I go to the National Championship in December and would like place in the top ten,” he said. “Then I want to qualify and participate at Junior Worlds.”

When asked who inspired him, the skater responded: “Daisuke Takahashi! My first impression of Daisuke was his Long Program to La Strada at the Vancouver Olympics. Also I saw the hip-hop version of Swan Lake on youtube, and right away I was attracted to his skating. That is my favorite program. He is so cool and his performances are phenomenal! I am amazed at his steps and just everything.”

When Nakamura isn’t training, he likes to unwind at home.

“On my day off I like to relax and be lazy,” Nakamura relayed, laughing. “My hobby is to sleep! I also like to play games and watch action movies. I like the anime series One Piece. It is a very long series, but a new movie came out recently, which I enjoyed watching. I also like all the James Bond movies, but I like Daniel Craig, so I like watching the series where he is playing the main character. The latest movie I watched was Top Gun.”

In the near future, the skater plans plans to go to university to study Sports Science, but still plans to compete while getting his education.

“I was working hard after the first JGP and I was in a good physical condition to head to Armenia, so I was very upset once I heard about the cancellation,” he relayed, “but now I will be competing at JGP Italy. What I have to do and how I have to skate will not change. My goal, to get 80 points in the Short and 150 in the Long Program, will not change. So now I have to practice, but what I am aiming for will not change.”

The win from his first Junior Grand Prix has certainly given Nakamura a confidence boost as he takes the ice tomorrow for the Men’s Short Program in Egna-Neumarkt. He is currently ranked eighth in the standings, and after this final event, the top six highest scoring skaters will qualify for the Final which will be held in Turin, Italy, December 8-11, 2022. 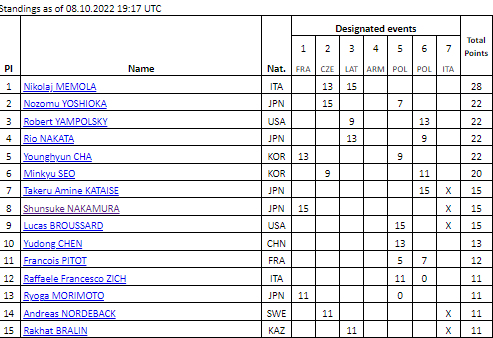