Project Runway | Golden Skate
Menu
Log in
Register
Navigation
Install the app
More options
Contact us
Close Menu
You are using an out of date browser. It may not display this or other websites correctly.
You should upgrade or use an alternative browser. 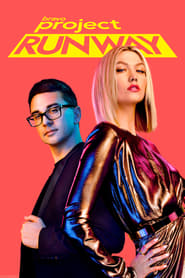 Overview: Aspiring fashion designers compete for a chance to break into the industry. Each week, a designer is eliminated from the competition after exhibiting their work in front of a judges' panel.

Has anyone checked out the "new" Project Runway and/or watched the "old" (version)? What do you think of the new hostess and mentor?
Heidi Klum has been replaced by Karlie Kloss
Tim Gunn replaced by Christian Siriano
Nina Garcia is still a judge, the only one remaining from the original cast.
D

I looooove Christian Siriano. And Nina was the best of the judges so I’m glad she’s sticking around.

I've been watching. I like Christian as a mentor. As much as I love Tim Gunn, Christian has the experience of having competed and has a fresher eye on fashion.

Nina's the best judge - truly editorial. When i watched last night, she was the one who adjusted the sleeve on the one look that made quite an impression.

As for Kloss, I think she needs to make the hosting role her own. By using the same tag lines as Heidi, it just seems like she's mimicing Klum. Obviously, 'you're out, please leave the runway' needs to stay, but she needs to introduce something original to the show.

I'm so happy to see Christian Siriano mentoring the designers. As for Karlie Kloss, if she would stop posing I think I may begin to like her. I've always so enjoyed the show and glad it's back.
W

Hell yes, I'm watching. Lifetime turned the show into a sobfest. It's good to have the focus back on the designs again.

And I had to laugh, Dee, about what you said, re: Karlie. Spot on.

I am enjoying this new version of the show... work room has a fresh design, warmer tones; designers seem to interact with each other more in positive way, flawed on occasion but see each other as adults.. last night was designing garments with all over pattern and there were some lovely things...
I was surprised some of the designers had no clue how to work with patterns; I would think such a skill would be super basic in that profession! But pattern and color is one of my favorite things on earth, so what do I know?!
Feel I must express my disappointment in the episode of Project Runwary All Stars that aired a coupled of weeks ago... Nina had just returned from Thailand (I think it was) and, in tribute to all the exquisite silks she saw there, brought the challenge of making a gown of silk suitable for a royal ball. Issac Mizrahi expressed it for me..he being so disappointed that NO ONE realized potential. Even I could have done better.. so sad!!

And I had to laugh, Dee, about what you said, re: Karlie. Spot on.
Click to expand...

So glad to see you're watching. I missed our little nice debates on the designs. I always loved your comments whether I agreed with them or not.
W

Dee4707 said:
So glad to see you're watching. I missed our little nice debates on the designs. I always loved your comments whether I agreed with them or not.
Click to expand...

Yay Dee! Yes, totally. I love chatting PR with you.

Kovid however is already just boring me. Enough with the unicorn pixie cutesypooism.

I'm in love with Sebastian's work already though.
B

This is my first visit to this forum. I have watched all seasons of PR and found that the longer the show was on Lifetime, the more boring and cookie cutter it got.

I am actually enjoying this remake. I think Christian is doing a great job. He's got a point of view, he's knowledgeable and he's supportive. But he's not afraid to be critical. I loved Tim Gunn, but he became a cardboard cutout of himself when they moved to Lifetime. The focus became too much about personalities and the clothes actually seemed unimportant. Nina is a good judge. I am warming to Brandon. He seems to be looking at the designs and designers as if they were working for him, which is not a bad way to approach this. Elaine is actually much more astute and interesting than I was expecting. They aren't really going in for celebrity judges this time. I do think it would be useful to have other established designers judging, but they probably can't get them at this point. But a fresh point of view is always welcome.

Karlie is ok. Heidi, love her or not, had a very definite personality and point of view. But she did seem a little remote from the designers. She was much more in tune with the models. Karlie hasn't really established a presence yet. She seems to empathize with the designers more, but we really don't know who she is, Yes, she's a supermodel, and she's pretty and nice and wears clothes well. But you get the feeling that anyone could do her job. And that's not a compelling argument for her presence. I like her, but so what? I think she can do better than she's doing. Maybe she's just too nice. She probably has strong opinions. She needs to let them come out.

I plan to keep watching the show. There has been some good work and some terrible work. I am not a fan of the unconventional challenge. It has no bearing on the fashion industry and smacks of Freshman Year in Art School. But yes, it is entertaining to see what they can come up with. But it's one reason why Christian is still the only successful designer to come from the show. He succeeded despite it, not because of it. Which makes him a very astute mentor. And they seem to be refocusing the show on the creative process, rather than infighting between the designers.

WeakAnkles said:
I'm in love with Sebastian's work already though.
Click to expand...

I like his work too. I haven't picked a real favorite yet, I do like several of the designers right now.

One of the things I like about this PR is they have the plus size models.
W

This season started out slow but very promising but has turned out to be one of my favorite cycle in years. My heart went out to Bishme, and I do hope they bring him back for an All Stars season, but I do think the right three designers made it to the finale. I'm still team Sebastian, but both Hester and Garo have really grown on me. And bless Bravo for refocusing the show on DESIGN and FASHION. That is the real drama after all. So bravo to Bravo!

ETA: And I think Mimi is the best model they've had on there in ages.

WeakAnkles said:
This season started out slow but very promising but has turned out to be one of my favorite cycle in years. My heart went out to Bishme, and I do hope they bring him back for an All Stars season,
Click to expand...

WA, this has been one of my favorite seasons as well, if not the favorite. I thought Christian did a great job, how he would get as nervous as the designers, also his efforts getting them back on track. If you remember I was not a big Tim fan couldn't stand his gushing saying nice things to say something and I never felt they were sincere, just my opinion. I also loved how the designers encouraged each other.

My heart went out to Bishme as well. He was such an emotional mess.


WA said:
but I do think the right three designers made it to the finale. I'm still team Sebastian, but both Hester and Garo have really grown on me. And bless Bravo for refocusing the show on DESIGN and FASHION. That is the real drama after all. So bravo to Bravo!
Click to expand...

I agree with the final three designers except I am not really sold on Hesters designs but I will say her designs are very different and I do want to see her collection. I am just hoping that Sebastian doesn't freak out like he did in the last episode.


WA said:
ETA: And I think Mimi is the best model they've had on there in ages.
Click to expand...

I felt bad for Bishme too. It wasn't just the show, but also all the crises his family were dealing with. I too hope that he comes back for another run at PR, althoough I haven't really cared for the AllStas seasons in the past.

I do feel like this was one of the stronger groups compared to other recent seasons.
W

Best finale in YEARS. The right person won. No unnecessary (melo)drama. Good suspense up to the winner reveal.

Learned, or rather RE-learned something from stylist Marnie. Sebastian's belts, while absolutely superbly designed and crafted, often pulled the eye from the clothing. And when she showed Sebastian about why the midriff of one dress absolutely needed to be smooth and belt-free, it was Coco Chanel reincarnated: quite often LESS is SO MUCH MORE.

Only disappointment was no Mimi on the runway. That woman knows how to sell an outfit. I hope they bring her back for next season.
TV show information provided by The Movie Database
You must log in or register to reply here.