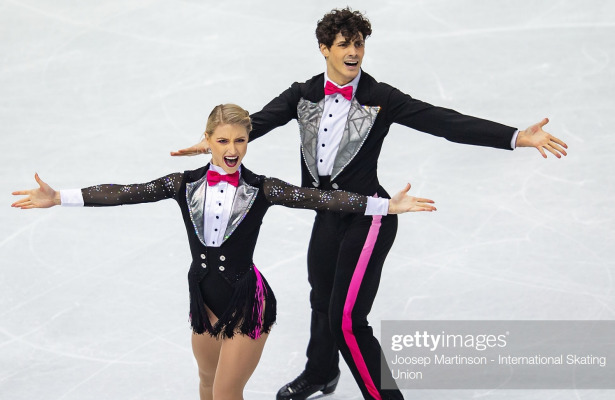 Piper Gilles and Paul Poirier of Ontario perform to selections from “Mack and Mabel” for their Rhythm Dance.

In their ninth national championships together and five silver medals to show for those appearances, Piper Gilles and Paul Poirier are finally poised to secure their first Canadian title after an animated and energetic performance to selections from Mack and Mabel.

While the team scored 88.86 points, the program was not without its challenges. In the opening steps, Gilles’ hair braid tangled around Poirier’s shirt button and required his swift manipulation to detach her. The harrowing moments were an interruption to the program, but did not occur during a required element. They persevered to earn level 4 on all five elements and high grades of execution (GOE) for their strong twizzles, midline and pattern step sequences, and animated closing rotational lift.

“We may have to take measures and take buttons off,” Poirier said of the mishap. “We have to see what caused it, but overall, it was a really great skate for us. I think in some way, it was a distraction that kind of settled us. It took us out of the performance for a second and it forced us to really reground ourselves and just be really focused. I think we are really pleased with the skate, that we were able to overcome that and perform really solidly and get the elements done as well as we could. It was just what we wanted other than this little first bit of the program. This was a weird thing but that’s sport, unexpected things happen, but you have to take them in stride and keep skating and that is what we were able to do.”

“We have had bobby pins fall out, but never an incident where we became stuck on each other,” said Gilles. “It was a laugh, that’s for sure! We have done this program in practice on the best days and the worst days. I think being able to figure out how to pick yourself up and be calm and collected and keep a smile on my face…we did that and kept going. Because I was laughing about my hair, I don’t think I was so focused on my feet and I just let myself go on autopilot and let the training do its work.”

“And we tapped our troubles away!” added Poirier.

Marjorie Lajoie and Zachary Lagha made an impressive senior national debut by finishing second with a whopping score of 77.26, helped by a dazzling level four rotational lift to close the program set to West Side Story. Their only obvious error was Lagha’s unbalanced final twizzle in the first sequence. All key points were met in the Finnstep which was graded a level 4.

“Marjorie thought it was really good,” he reflected. “I am disappointed with the twizzle, but that’s okay, I will have it tomorrow. I was too far forward. I tried to fix it in the middle of the twizzle. After the mistake on the twizzle, I thought the marks would be 75, but we still got 77 and it’s a really good score. We will take it.”

The duo particularly came alive in the final moments of the routine during the midline step sequence and the rotational lift.

“With the crowd and the feeling of competition, it was really fun to do because we are normally really tired, but with everyone around, I think it was very fun to do,” Lajoie said.

Despite the second-place finish and qualification for the World Championships on the line, Lajoie and Lagha are trying to remain grounded.

“Qualifying for worlds would be amazing,” he said. “After our first senior year, to go to worlds would be pretty amazing since not a lot of people do that and the Montreal thing is a bonus because it’s our home and of course we would like to go. But I don’t really think about it, I think about the skating part.”

Carolane Soucisse and Shane Firus were disappointed to be in third place after the Rhythm Dance given their goal to be in second behind favorites Gilles and Poirier. Skating to music from Jersey Boys, the duo was animated and energetic, managing a level-four twizzle sequence, but made an error during the Finnstep when Soucisse put her free foot down early to regain her balance. The team scored 75.83.

“We will learn,” she said of the mistake.

“Overall, we really like the attack that we skated with and the confidence,” added Firus. “We just left some little ice dance points on the table, but we prefer and are really focused on skating clean. Development-wise, it was better for us. We were really happy with today and are really looking forward to tomorrow.”

Soucisse said their game plan remains intact despite the error and placement.

“Goals going into nationals is not to be perfect, but just to go for it, and if there are mistakes, it’s okay,” she explained. “When we look at the sheet, we know where the points are.”

Firus is still pleased with the score. “We just threw away points that we shouldn’t have, but we were happy with the score and 75 is good for us.”

The team of Alicia Fabbri and Paul Ayer skated to “Big Spender” and scored 68.26 to finish in fourth, followed closely by Molly Lanaghan and Dmitre Razgulajevs (67.63).