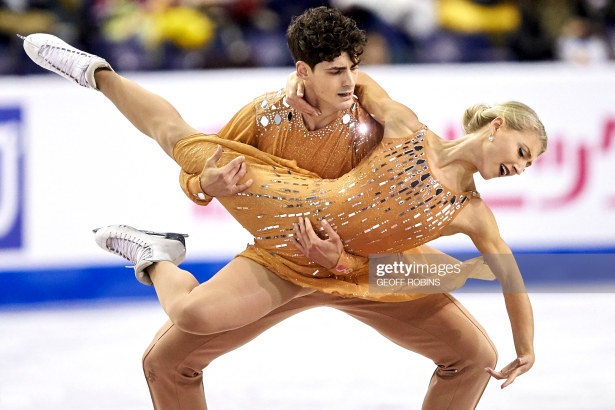 Piper Gilles and Paul Poirier perform their Free Dance to “Both Sides Now” by Joni Mitchell.

Piper Gilles and Paul Poirier finally clinched their first Canadian national title in Mississauga with an ethereal free dance to “Both Sides Now” by Joni Mitchell. With six level four elements woven by whimsical choreography and poignant musicality, the 2019 Skate Canada International champions scored 136.76 for a total competition score of 225.62.

“Going first into the free dance is not something we are used to,” said Poirier. “We are usually the ones chasing, so that was a new experience for us.”

“It’s obviously something we have worked really, really hard to get and it hasn’t come easily, but I think everything is about timing in life,” added Gilles. “I think we have kind of finally found what works for us and we’re just trying to ride off of it. To be able to be Canadian champions is absolutely thrilling and we are both really proud of ourselves.”

“It was one of those programs we really had to think through and take our time and really take it one step at a time,” said Poirier. “It wasn’t one of those ones that happens easily and automatically. I think we have been able to rely on our training all season. We have been so well prepared for this event and for every event. I think this event has given us a lot of confidence as we head into the last few competitions of the season. I think we are just so happy we were able to do this together, Piper and I.”

“That’s a number that we want to strive to, to be on the top of the podium at the World Championships, so it’s gotta start here and we need to ride off that,” Gilles said.

The team elaborated on changes to the program following their fifth-place finish at the Grand Prix Final.

“We have opened up a few little bits of the program that I think has allowed us to skate with more freedom, abandon and speed, which I think leaves a strong impression with judges and the audience,” said Poirier. “We took the time after the Final to rework the program and just figure out those little bits that were kind of killing the momentum of the piece. I think overall, this is a stronger performance than anything we did on the Grand Prix circuit.”

Marjorie Lajoie and Zachary Lagha continued their impressive statement-making debut at the senior level by snatching the silver medal. They skated their Freddie Mercury number with panache, executing seven level four elements including a sensational opening stationary lift. The 2019 World Junior Champions scored 121.66 points in the free dance to finish with 198.92 points overall.

“It felt good,” said Lagha. “I think we are really happy with the way we skated even though there were some well, for example, I think I almost fell two times. I am still proud. We attacked the program and that is most important.”

The team felt motivated by their dynamic music.

“There is a lot of emotion that we can put in one four-minute program,” added Lajoie, “and we can pass through many emotions, so that is what I like about this piece.”

“We are happy about how we skated, more than the results,” said Lagha.

Carolane Soucisse and Shane Firus skated an animated Tom Jones medley to win the bronze medal, earning a score of 114.46 in the free dance for a total score of 190.29. Four level four elements punctuated the program including a dynamic combination spin, however, Firus tumbled in the team’s first element: the one-foot step sequence.

“For me, it was just about attacking the performance today,” Firus reflected about his mindset. “Maybe I gave too much, but the beginning was feeling good. For some reason, I can’t do counters this week, so we will go back home and practice those.”

“The fall, these things never happen, even in practice,” said Soucisse. “So, it’s very unfortunate, but I was very happy how we recovered from the fall and how we stayed together because it is so easy to let your mind go and just screw the rest up. And it was at the beginning, so it was very important and I was very proud that we brought it back together and we were even more together than when we started.”

Finishing in fourth, Haley Sales and Nikolas Wamsteeker bounced back from sixth place after the Rhythm Dance with a score of 111.86 in the free dance for a total score of 176.82. Molly Lanaghan and Dimitre Razgulajevs finished fifth with a free dance score of 102.82 for a combined score of 170.45.