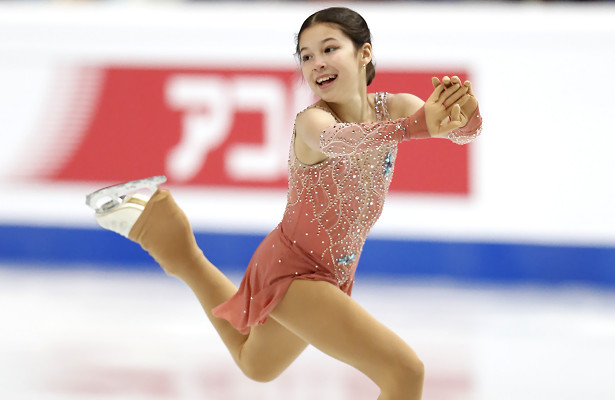 USA’s Alysa Liu currently leads the junior Ladies after the Short Program in Torino, Italy, on Thursday. Russia’s Daria Usacheva is close behind the American, followed by teammate Ksenia Sinitsyna. All the junior ladies delivered near-solid performances, making for what will be an exciting Free Skate on Friday.

Liu smiled throughout her routine to “Don’t Rain on My Parade” by Barbara Streisand, landing a solid triple Axel-triple toe, double Axel and triple loop while showing good level 4 spins. The layback spin in particular received mostly +4 and +5  grades of execution (GOE), and she scored a new personal best of 71.19 points.

“My short program felt pretty good,” said the 14-year-old, Richmond, Calif. “I was very happy with it. I’m just trying to enjoy the moment, even during the program. I don’t really get nervous and I don’t feel barely any pressure. I just tell myself it’s just another competition. Tomorrow, I’m planning two quad Lutzes and two triple Axels and hopefully show them completed and landed, and there’ll be some changes to the choreography.”

Skating to “Please Don’t Make Me Love You” by Linda Eder, Usacheva landed a solid double Axel, triple loop and triple flip-triple toe. The 13-year-old from Moscow also showed good artistry and flexibility throughout her routine, especially on the level 4 spins. She was also awarded many positive GOEs for elements, tieing her teammate Sinitsyna with the highest program component score of the group. She scored 70.15 points.

“I expected a good result, but of course you always want to do and get more,” said the 13-year-old from Moscow. “In general, I was not nervous today. I was quite confident and was trying to imagine like I was skating on my practice. I had a good day and was in a good mood. I’m glad that I managed to calm down and to show a clean performance.”

“As for Grand Prix series I felt nervous and was thinking what jump I should land which was different for my skate here,”added the skater who took silver in both Junior Grand Prix (JGP)events. “I was able to calm myself down. We didn’t change the content in my free program. I will try to keep calm like today and to show my best.”

Like many others, Usacheva has hopes of making it to the 2022 Olympics.

“I must work hard for it and learn new difficult elements,” she summed up. “In the nearest future I’m going to learn the triple Axel.

Sinitsyna was also solid in her routine to “Alfonsina y El Mar” by Ane Brun, landing a triple loop, double Axel and triple Lutz-triple toe. All spins were graded a level 4 and the 15-year-old from Moscow sits in third with 69.40 points.

“I skated clean, but I wanted even better, but it is what it is,” said the JGP Egna/Neumarkt gold medalist. “I’m happy, but not fully. I want my skating, and every movement and every step, to be perfect. I want to tell a story, show creativity and express the music.”

Teammate Kamila Valieva turned out her opening triple loop, but otherwise gave a remarkable short to “Spiegel im Spiegel” and “Allerdale Hall,” which also featured a double Axel, triple Lutz-triple toe, and level 4 spins. She is currently in fourth (69.02).

“I felt the (triple) loop was wobbly, but I knew I had to pull myself together  and carry on and skate as well as possible,” noted the 13-year-old from Moscow. “I was quite nervous—it is the Grand Prix Final and it is my first time here, but I know in principle I can skate clean. I just need to be less nervous.”

Valieva is not planning on doing a quad toe in the free as she was injured three weeks ago. “I feel fine now, but I don’t want to do it until I feel confident,” she said.

Russia’s Viktoria Vasilieva gave a strong performance which was highlighted by a triple-Lutz-triple toe, triple loop, level 4 spins and very good level 4 foot work. The JGP Baltic Cup silver medalist earned a personal best of 68.70 for her routine to music from the Tron: Legacy and The Fifth Element soundtrack.

“Although all elements went well today, I am not one hundred percent satisfied with the skate,” said the 16-year-old from Moscow. “It can always be better. That’s just me. In every skate, I can find something that could be better. I’m a perfectionist.”

Vasilieva is very happy to have qualified for the JGP Final and claimed the audience was very supportive.

“I tried to focus on the skating quality and the spins for the Final, since in the past, those were my weaker points,” she added of her preparation for the event. “I think that the work paid off since today I was able to show what I was training.”

The skater is also currently working on the triple Axel to add to her repertoire.

Haein Lee of South Korea is sixth with 65.39 points. The 14-year-old from Seoul underrotated the back end of a triple Lutz-triple toe, but was otherwise clean, showing a solid triple loop, double Axel and strong spins and footwork in her short to “Nocturne.”

“I’m very nervous today,” admitted the skater who won both her JGP events. “I practiced a lot before coming here, and I had a tough time during practice, but I’m just very happy to be able to come here competing at the Junior Grand Prix Final.”