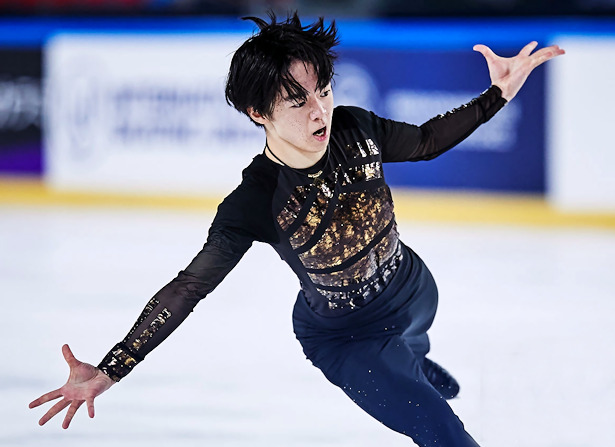 Yuma Kagiyama of Japan performs to “Gladiator” at 2021 Internationaux de France in Grenoble.

Japan has a new shooting star: Yuma Kagiyama surprised the world of figure skating when he came out in his World Championship debut last March to take the silver medal, even beating his idol and the most successful skater of our time, Yuzuru Hanyu.

However, Kagiyama was not an “unknown” as he had earned silver at the 2020 World Junior Championships and bronze at the 2020 Four Continents Championships, his international-senior level debut. The short skater is very quick on his feet and impresses with his jumps and skating skills.

The Japanese youngster, who turned 18 in May, continued his success this season, his first full-fledged senior year. Last season, he was only was able to compete at the domestic NHK Trophy and Worlds in Stockholm due to the pandemic. This season, he was the only man to win both his Grand Prix events in Italy and France and topped the ISU Grand Prix standings. Like many others, Kagiyama was excited to go to the Final, which was scheduled to be held in Osaka, Japan, but the event was first postponed and then cancelled. His next event is the Japanese National Championships in Saitama over Christmas.

Kagiyama will be up against Shoma Uno and probably Hanyu, who has not yet competed this season after injuring his ankle, but has been entered for Nationals. Kagiyama should definitely be a shoo-in for the upcoming Olympics in Beijing. The original selection criteria were winning the Grand Prix Final, Nationals and/or being the top ranked Japanese skater in the ISU World Standings and now being qualified for the Final. Kagiyama not only qualified, but is also currently ranked first in the World.

The Grand Prix season provided the 2021 World silver medalist with important experience. “It was my first Grand Prix series as a senior and I was really excited as it is different from other competitions,” he said. “Competing in the Grand Prix helped me understand what I need to work on and what was good and not so good.”

In fact, not everything went perfectly. At his first event Gran Premio d’Italia, Kagiyama ranked only seventh in the Short Program as he stumbled on his quad Salchow and then tripled his toe and failed to complete a combination. “These mistakes really threw me off and after that short program, I wasn’t really able to switch my mindset and I didn’t know what to do,” he recalled. His coach’s – and father’s – advice helped him to regain focus. “My father told me to forget about everything that happened before and I told myself, ‘I am just a challenger.'” Once the pressure was off, Kagiyama skated freely in the long program and reeled off three quads and seven triples to move up and win.

In France, the 18-year-old had to deal with a different situation. This time he came first in the Short Program, which is a different kind of pressure. In the Free Skate, he wobbled on the second quad toe and singled the second triple Axel, but still claimed victory with almost 22 points to spare over his friend and teammate Shun Sato. Kagiyama was very upset with himself about popping the Axel, but was pleased overall with his outing in the Grand Prix.

“I feel that I have improved this year, because I was able to compete with a lot of very experienced athletes last season,” acknowledged Kagiyama. “Among them are Yuzuru Hanyu, Nathan Chen, Shoma Uno, and Vincent Zhou. This season, I have not yet been able to compete against Shoma yet. I have only seen his results and looking at my results, I realized that it is still difficult for me to compete with him.” The first showdown will now happen at Nationals.

Kagiyama has his firmly eyes set on to Olympic Games. “My ultimate goal for the season is the Olympic podium,” he shared. “In order to get there, I have to focus on each competition. There are different challenges at each of them. Little by little, I feel that I am improving and this hopefully will lead to me having a clean short and free program at the Olympics.”

Nevertheless, the 18-year-old knows that he is the newcomer. “I still have a lot to improve on and I am still very inexperienced,” he noted. “First of all, I want to perform my programs without mistakes and leave a strong impression.”

It is helpful for him that his father, Masakazu, a two-time Olympian for Japan in 1992 and 1994 and a three-time National Champion, is back at his side at competitions. Kagiyama senior was unable to travel with his son during the 2019-20 season as he was recovering from a hemorrhagic stroke. He is still walking with a cane, but he came with his son to the two Grand Prix events in Europe.

“My father is very experienced and he tells me how he felt when he was competing,” Kagiyama noted, adding that he never felt any pressure to follow in his father’s footsteps. He started skating when he came with his dad to the rink as a child. He first only had fun on the ice, but then got hooked. “I wanted to learn more and to start training seriously,” the skater explained. However, the 2020 Youth Olympic Games Champion admitted that he became really serious about training only when he moved up to the junior ranks and started to compete internationally.

He now trains in Yokohama in the group of his father. “I do not get any special treatment. I am just like all the other students,” he shared, adding that his father is not too strict as a coach with him as long as he is working hard in practice.

Kagiyama has worked on the quad loop, but did not try it in the Grand Prix as it was not consistent enough yet. He went for it at the Olympic test event, the Asian Open Trophy in Beijing in October, but while he rotated it, it was not clean. He might go for it at Nationals, depending on the situation. In fact, the quad loop apparently is only an intermediate goal. The ambitious skater is looking further and dreams of attempting a quintuple jump in the future – but definitely not this season.