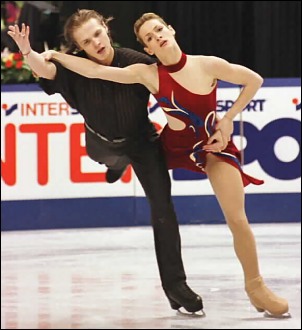 One of the most inspiring performances at the 2001 World Figure Skating Championships was that of Albena Denkova and her partner Maxim Staviski. The 5-time Bulgarian champions became the first ice dancers from their country to finish in the top ten at Worlds a year after Denkova was severely injured at the 2000 Worlds and hospitalized for months, unable to walk.

The saga began at the last practice before the free dance in Nice when U. S. dancer Peter Tchernyshev’s blade slashed through Denkova’s leg less than an inch above her boot, severing two tendons and a muscle. Rushed to the emergency room, Denkova endured a lengthy operation to reassemble her shattered leg, then remained hospitalized in Nice for a week before being flown home to Bulgaria. She remained in a hard cast for three months, including six weeks in bed, but was encouraged that many skaters called or visited her in Sofia to cheer her up.

Finally, she was able to begin skating again, but her leg became grotesquely swollen every time she skated. Each day she skated, Denkova had to undergo continuing physiotherapy to relieve the swelling, then rest until the swelling went down before she could skate again. She was eventually able to return to training, but stated that they “had to limit the number of run-throughs because we were afraid of the leg.” She continues to have pain, especially when the weather changes.

The couple’s troubles continued in the fall. After she asked the U. S. Figure Skating Association whether they had insurance to cover some of the costs of her hospitalization, the couple’s invitation to compete at Skate America was withdrawn in retaliation with rumors circulating that she had sued Tchernyshev for the injury. “That’s not true,” she said. “I only asked if he had insurance that could help pay my medical bills since the ISU did not help me. I don’t want to sue him. Lang and Tchernyshev withdrew from the Cup of Russia because they (the USFSA) said it was not good to skate on the same ice as me. They treated me like I was a wild animal. The United States thinks we are a small country and they can do whatever they like to us.” U. S. representatives stated that they asked for a switch from Cup of Russia to Trophee Lalique because Lang and Tchernyshev had a better chance for a medal there. However, the two couples have not been at the same event in two years with the exception of the 2001 Worlds.

Then Denkova had to stop skating for several days before the European Championships because they both had the flu and the virus reacted with her leg wound, causing more swelling. “It was extremely painful and I was only able to skate because I was on painkillers all week,” she noted. But they still managed an eighth place finish, their best ever. Maxim also had health problems, including being felled by pneumonia for three weeks after the 2000 Europeans, from which they were forced to withdraw.

That’s ironic considering that his mother introduced him to the sport because he was in ill health as a child and his parents thought that figure skating would help him to be healthier. He was four at the time. “Skating was very popular in Russia at the time and they thought some sport would be good for me,” he stated. “I competed for many years by myself and was doing all the double jumps. But when I was 11 or 12, I broke my leg. Not terrible, but I was in a cast for six months and after that I could not jump as well. My coach recommended me to Dubova’s group and I became an ice dancer.”

Albena actually started out as an artistic gymnast when she was only four. “Gymnastics was very popular in Bulgaria and we had just won all three medals at the European Championships,” she remembered. “So my parents wanted to send me to training. Then when I was eight or nine, a skating coach came to our training center and asked me if I wanted to try figure skating. It was not known very much in Bulgaria but was on television, so my parents decided to let me try it. I liked the combination of artistry and strength, but I could not jump. Then I saw the ice dancing and thought it was very beautiful and very artistic so when I was 12 I started in ice dance.”

Albena first competed with Hristo Nikolov but it didn’t work out. “Very often the partners don’t suit one to another,” she said. “The same was the case with my previous partner. He was not so ambitious like I was and we split up.” Maxim skated with Anastasia Belova, reaching Junior Worlds in 1996 as the third Russian couple. “My partner wanted to continue to compete in juniors, but I was too old, so we broke up,” he stated. “I got proposals from as far away as Australia but I wanted to stay close to Russia.”

Albena continued the story: “Our ice dance judge had a conversation with Elena Tchaikovskaia during the 1996 Worlds in Edmonton. They were looking for someone to participate for our country with a Bulgarian partner. She said there was a Russian boy and that’s how I found Maxim. I had not skated for a year, but I went to Moscow and tried out,” Albena said. “We matched each other so Maxim moved to Sofia in 1996.”

The dancers train with Alexei Gorshov part of the year in Moscow, especially when they are learning the choreography. Then they return to Sofia where they spend most of the time working alone. In the summer, they usually work six hours a day on the ice and in the winter four or five hours. Then they spend another two or three hours on the floor, practicing moves and doing ballet and modern ballet. “Our choreographer (Sergei Petukhov) is really good in modern ballet and has us doing special exercises every day,” Albena noted.

“We also practice a lot on the compulsories,” Albena noted. “Sometimes three hours a day. So we have very good compulsories. Unlike most of the couples, we like the compulsory dances. That is the place where you can show your technical level.” “The hardest ones are the easiest ones for us,” Maxim added. “We like the hard ones, not the easy ones like the quick step.” “We like all the dances, but the problem with the original dance is that there are too many restrictions which don’t allow us to be different from the others. That’s why our favored OD was the waltz “Dance of the Spirits,” Albena continued.

The couple are known for skating unusual programs with strange positions. Last year they used the Theme from the Pink Panther by Henry Mancini for their foxtrot and “I Wanna Be Like You” from the Jungle Book soundtrack for their original dance, then followed with “Journey to the Heart” from Xotica by Rene Dupere for the free dance. “It’s a bit dangerous for a top couple to skate the same dance for two years,” Albena noted, “but there were special circumstances. We concentrated on the original dance and tried to make it look as different as possible for that type of music.”

“People accept strange ideas,” Maxim continued. “We like to do something different every year, to show different characters. Albena said maybe we should take this music and try to be different.” “It’s important to have good music and good costumes,” Albena added. “I think about costumes when I’m listening to the music. I have ideas in my mind and then take them to our designer. I’m always watching the fashion channel on TV because I love music and clothes.”

Since her family used to own a garment factory, Albena knows a lot about clothes. “She has great taste,” Maxim said. Even though she has a university degree in economics, she is considering a career as a clothing designer. “I’m a huge fan of fashion and I’m thinking of going to New York or Paris to learn,” she stated. But Maxim is the artist of the pair. “I’m always telling him he has to draw,” Albena said. “He’s very good.” Maxim is more modest, explaining that he went to an art school for a few months because he was always drawing fantasy figures and his parents told him that he must know how to draw as a professional. Now he’s doing computer drawing with a software program. They both use the computer for email and the Internet.

Albena is interested in art as well as fashion and reads a lot of art books. One of the reasons that she uses a computer is to look at CDs showing famous paintings and other works of arts. “I love museums,” she said. “My first time in Paris I spent four days running around to see all of the museums.” Both of the skaters enjoy visiting other countries. “I don’t like to fly too much. We get tired from traveling around the world all the time, but when we don’t we miss it right away. We like to go sightseeing because we can see different places and cultures, but often there is just not enough time. We are too busy running from practices to competition and then back to the hotel to rest.” Maxim cited Australia as the most interesting place that he had traveled, a country Albena still wants to visit. Both dancers would also like to visit Brazil. Albena wants to go see Carnival, while Maxim wants to visit Rio de Janeiro.

The skaters don’t get too much of a break from skating to make holiday trips. “There’s not much to do in Russia except practice, sleep, practice, sleep,” said Maxim. On short breaks, they visit their families and on their summer holiday, they usually go to the beach, where Albena sunbathes and Maxim likes to dive and spearfish. “I hate snow and cold. I want to go to places where it’s sunny and warm,” she said. Neither skater collects anything special, although Albena used to collect postcards. “I do keep all the toys I get. They’re all over my room,” she laughed.

Currently, they are the first substitutes for the upcoming Grand Prix Final after a fourth place finish at Trophee Lalique and third at NHK Trophy. The dancers plan to compete at the 2002 Olympics, then decide whether to continue or pursue their other interests. Since Maxim has his degree from the sports institute, he may go into coaching, especially now that figure skating is more popular in Bulgaria. “In the last few years, with the good results of Ivan Dinev and me and Maxim, figure skating became very popular in Bulgaria. I can tell that now it is the most famous winter sport in our country,” Albena stated. With such a courageous couple representing them in Salt Lake City, Bulgarians may love figure skating even more after the Olympics.