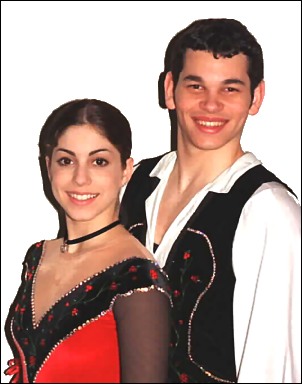 When the winter Olympics schedule was changed in 1994, skaters had the opportunity to compete in three Olympics in six years. This provided an unprecedented windfall to those who were near the top, like the pairs teams of Jenni Meno/Todd Sand and Kyoko Ina/Jason Dungjen, both of which ended up in the top five at the 1998 Olympics. But with few of the top pairs moving into the professional ranks, opportunities for younger pairs to move up and compete internationally were limited. That resulted in a down cycle for U. S. pairs that has been so severe that there were only a handful of senior pairs left at the 2001 U. S. Nationals.

Fortunately, there are a number of talented pairs teams that could resurrect the U. S. pairs tradition by the 2006 Olympics. Among the most impressive is the team of Jacqueline (Jackie) Jimenez (16) and Themistocles (Themi) Leftheris (18). Both of these skaters were inspired by television and wanted to try it. “I thought it looked like a lot of fun. The pairs looked like the most fun with the throws and lifts. So I started in a Learn to Skate Program,” Leftheris said. He was 12 when he started, while Jimenez was 11. Like Tara Lipinski, she started roller-skating first, when she was six, and then switched to the ice. “I have always loved skating,” she said. “It was something that I was good at and had a great time doing, so I decided to stick with it.”

Both skaters competed initially in freestyle. Themi, who won the novice men’s competition at the 2000 North Atlantics, had landed his first clean triple salchow when he was 14 and had a solid triple toe loop. Themi had hoped to qualify for Nationals in both novice men’s and pairs at the 2000 Easterns, but the schedule put him at a huge disadvantage, having to skate both short programs one day, then both long programs the next. “I wanted to win more in pairs, so I concentrated on that,” he stated.

Both skaters enjoy the partnership involved in pairs. “I like jumping and I like the connection you have on the ice between you and your partner,” he said. Jackie said “To me pairs is much more of a thrill. I am getting thrown, lifted, and spun in the air, and I just think it is so much more fun to do rather than skating by myself.”

Themi cited the split triple twist as his favorite move, while Jimenez said she prefers throws because “they are hard but a lot of fun!” Their lifts are particularly solid for a new couple, including their one-handed overhead lift. They already have side by side double Axels, a throw triple twist, and a throw triple salchow and are working on a throw triple loop, plus side-by-side triple toe loops.

Themi started pairs when he was 15 and competed in novice pairs at Easterns in 1998 with Melissa Ralph, but the skaters had different goals and Ralph decided to switch to ice dancing. Next season, he skated with Sarah-Jo Damron-Brown, winning Easterns and finishing fourth at the U. S. Nationals. But the pair split and Leftheris moved to Florida to work with coach Brian Kader and Kerry Leitch. Bader was also coaching Jimenez in singles and matched her with Leftheris during a summer tryout.

Among the skaters who inspire the pair are Brian Orser, Elena Berezhnaya and Anton Sikharulidze, and of course Ekaterina Gordeeva and Sergei Grinkov. “They made it look so easy. It all flows together in their programs,” Themi stated. “I watch tapes of them skating and try to base our skating on the things that they did.”

The skaters train for four hours a day six days a week on ice at the RDV Sportsplex in Maitland, Florida. Their off ice program includes ballet, pilates, weight training, and running. They have conditioning classes twice a week and take ballet for two hours a week. Both of the skaters have taken ballet since they were about 13.

The couple are using an Argentine tango for the short program, choreographed by Lea Ann Miller. Their long is to “Sheherezade.” Tango music is Jackie’s favorite when it comes to skating. “I’d like to do a techno program sometime,” Themi stated, “but it would probably have to be for a show program.” Off ice, Themi is a fan of the Cranberries, while Jackie prefers *Nsync. Themi also has a musical background, which helps in interpreting their music. He was first chair on bass clarinet in the all-county orchestra in Florida and also plays the saxophone.

For fun, both Jackie and Themi like to go to the beach or the amusement parks that dot the Orlando area. Last summer the pair joined Irina Slutskaya and Elena Berezhnaya in visiting area water parks while the other skaters were on a break from the Champions on Ice tour. When he was younger, Themi played a lot of soccer, playing mid-center and left forward on a Florida league team that finished second in its district. He still likes all kinds of sports but doesn’t play regularly.

Themi also enjoys going to action, comedy and horror movies or just to the mall with his friends. He spends a lot of time on the computer playing video games and chatting with friends. Jackie likes to shop, go to comedy movies and read mysteries, while Themi reads fantasy novels like the Harry Potter books, Talkie, and Lloyd Alexander. His favorite television show is South Park. Themi likes dragons and used to collect X-men comics, and Jackie collects Beanie Babies. She has a dog, a Maltese named Daisy, while Themi has a huge Maine Coon cat, named Buddy.

Themi just finished high school last summer. Before his training schedule started taking up so much time, he was enrolled in a pre-medical magnet school in Florida. He plans to attend Valencia Community College starting in January and later work in the mental health field as either a psychiatrist or a psychologist. Jackie is a straight A student in tenth grade. She plans to switch to the University of Nebraska home schooling program this summer. Her career interests are in fashion design.

Their goals for their first season were to make the international team so that they could move up to juniors for the 2001-2002 season and hopefully compete in the Junior Grand Prix. With their silver medal in novice pairs at Nationals, they accomplished that goal. Their first international competition was the Triglav Trophy in Slovenia in April, which they won easily. The couple finished second at the North American Challenge in Ottawa and again at the Junior Grand Prix in Bulgaria. They had a great chance of making the Junior Grand Prix Final before the USFSA decided not to send junior skaters to events following the September 11 tragedy. They recently finished second at Easterns by winning the long after placing fourth in the short, but only finished sixth in juniors at Nationals.

Eventually they hope to compete at the Olympics and Worlds. “I want to win senior nationals, Worlds, and Olympics,” Jackie stated. Themi hopes to continue skating until they can “tour as professionals,” while Jackie said, “it will be along time before I start thinking of no longer competing.”

Both skaters enjoy traveling to skating competitions. So far, Jackie’s favorite recreational trip was a cruise to Mexico, Jamaica, Haiti, and the Cayman Islands. She hopes to visit Israel. Themi’s only recent vacation was to Panama City Beach, but he would like to travel to Greece one day.