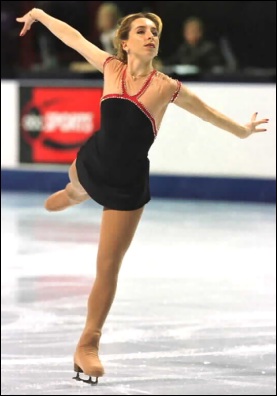 One of the biggest surprises at the 2002 World Figure Skating Championships was the re-emergence of Australian ladies champion Miriam Manzano as a serious contender.

One of the biggest surprises at the 2002 World Figure Skating Championships was the re-emergence of Australian ladies champion Miriam Manzano as a serious contender. Although her draws were awful, Manzano finished 16th, moving up after each skate. That was the highest finish for an Australian since Joanne Carter finished 12th in 1997, substantially better than Stephanie Zhang’s 37th in 2001. “It was definitely the most addictive and inspiring event for me ever,” Manzano said. “It was a friendly championship in terms of skaters interaction with each other which took away some of the pressure and tension that competition often has.”

What made the accomplishment more astonishing was the fact that the 27-year-old Manzano had retired completely from skating for two years after the 1997-98 season and only took up the sport again in 2000. “When I stopped, I felt like I had hit a wall and wasn’t achieving anything, so I’d take some time off,” Manzano said. “I didn’t think I would be off for two years but it took me two years to find myself. I had this little niggardly thing inside me that said I didn’t accomplish all I wanted to do in skating, so I decided to return.”

Manzano won Australian Nationals in 1993 and 1994. She competed at the Worlds Championships in 1995 and 1996 but finished 13th in the qualifying round both times, failing to make the cut for the technical under the old rules. “When I came back, I felt better than ever,” Manzano said. That showed in the results: second at Australian Nationals in 2001, followed by her win this year and two respectable showings at the Four Continents Championships, 14th in 2001 and 12th this season.

“It took me a while to get back physically and mentally to be prepared to compete,” Manzano said, “but I feel better than I’ve ever been. I’m on a roll now. Why stop? I’m skating better than ever and I think I can achieve some of my goals.” That includes shooting for the Olympics in 2006. Manzano was disappointed that Zhang got Australia’s Olympic berth after she had won the national championship. Zhang won that right by finishing fifth to Manzano’s sixth at the Otto Nepela Memorial in Bratislava. This competition was like an elimination round or skate-off between Zhang, Carter and myself, Manzano noted, “so as Zhang was the highest Australian placed in that competition our association gave her the right to skate at the Golden Spin. Zhang finished 25th at the Olympics, compared to Manzano’s 16th at Worlds.

Manzano became interested in skating when she was four after she saw an ice show on television. “I though it was magical,” she said. “My dad was a builder and we moved around a lot so I got roller skates, put on my Walkman and pretended I was a figure skater. People in the streets started watching me perform, so finally my parents got me lessons.” She was almost 12 when she finally started to skate and didn’t land a triple jump until she was 18, when she hit her first triple salchow. “I had a double Axel before that,” she noted. “Toe jumps are fun and the lutz is my favorite jump. The salchow is the hardest for me. I was working on a triple toe/triple toe before I came to Worlds, but it wasn’t quite ready. For the summer, I’ll also be working on a triple lutz/triple toe.”

Manzano trains for about 2-3 hours every day in Canberra, Australia, where she has worked part-time for the last three years as a personal assistant in the Attorney General’s Office. “Our rink is quite small, so I don’t have as much ice time as I’d like,” she said. She has a scholarship to the Academy of Sports where she works with a personal trainer, John Mitchell, who she credited with her rapid return. “He’s the real reason I got back into shape so fast,” she added. She does strengthening without weights, Pilates, inline skating and aerobics.

Reg Park is Manzano’s coach. She plans to go into coaching herself in the next few years. “I’ve had my time at school,” she said, “and I’m not planning to go to university. I’m planning to devote myself to skating. I’m doing courses now only have part of my accreditation done now.”

Cindy Stewart and Reg Park are Manzano’s choreographers, but she choreographs much of her own programs. “I love putting music on and floating around the ice. That’s the fun thing about skating, working on your program, getting it right. I get the same buzz as when I was a little girl,” she said. “Cindy is very inspiring and we work together a lot. Actually, not as often as I’d like as traveling to train overseas is very expensive. Definitely like to if I could find a sponsor or two.” Manzano is using “Concerto de Aranjuez” by Rodrigo for the short program and “The Count of Monte Christo” for the long.

“When you find the right music, it kind of hits you,” she explained. “You really feel it. You have to like the music to really skate to it. I’d been saving the short program music for a long time until I was good enough to interpret it. I like Spanish and Arabic music. My mom and dad were Spanish so it’s part of my heritage. I’ll probably keep the short for next season, but I’ll have a new long. I used this music in competition in 1997.” Off ice, Manzano said she likes “a bit of everything. I like dance music and whatever’s on the charts. I don’t play any music myself but I’d like to learn the guitar someday.”

For fun, Manzano said she spends time with her friends and family and does “normal fun things, like going to the movies. I like romantic comedies. I also love taking photos and I try to take away something from every country where I’ve been.” She also serves as the Australian skaters representative to voice opinions and concerns of all Australian skaters at the national association’s general meeting. Manzano collects soft toys and dresses. “Does shopping qualify as a sport,” she asked. “It’s my next best interest after skating.” She’s visited a lot of countries, but liked Spain the best. Some day she hopes to go to Egypt and see the Pyramids. Manzano also said she collects inspiring words and sayings, relating how one of them helped her this year.

“I decided it was “year of the butterfly” not because of the Chinese horoscope thing – just because of this amazing saying that really inspired me: Believe in butterflies, if they can fly a thousand miles, think what you can do! I saw that saying at the Academy of Sport gym I go to and John Mitchell gave me the poster the first day we did a session. After that day, for some reason or another I was reminded of that saying each and every day in some small way. “I’d see a butterfly float past and I’d smile and think of the saying, then I’d see a sticker on a car. Cards my friends gave me all had butterflies. I got to the day of my competition and felt butterflies in my stomach and it made me think of the saying so I was able to turn the situation around and skate my best. I know it sounds crazy but it really did happen! I believe it was a message and lesson I was supposed to stumble on and I’m glad I was reminded of it each day! Still happens but my next mission is to discover what this years reminder will be!”

Manzano is enjoying this season. She finished second at the Karl Schaefer Memorial in Vienna and ninth at Skate America, her first Grand Prix event. “After winning nationals and skating my best at the Worlds I feel I have finally taken my confidence and belief as a competitor to a whole new level,” she said. “It’s like being set free! And I’m so excited about this next coming season! So here I come!”