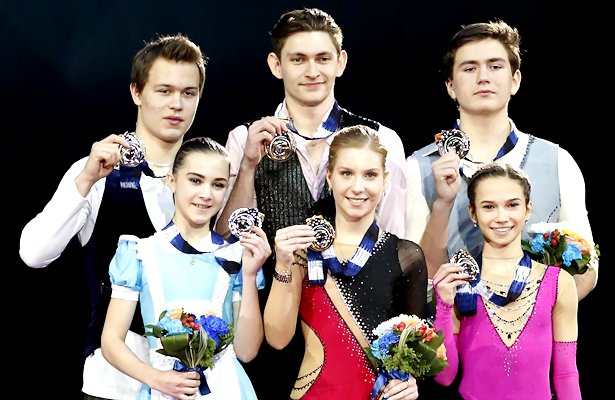 Ekaterina Alexandrovskaya and Harley Windsor made history when they became the first Australian pair team to win a Junior Grand Prix Final title at the event in Nagoya, Japan, on Friday. Russia’s Apollinariia Panfilova/Dmitry Rylov and Daria Pavliuchenko/Denis Khodykin finished second and third, respectively. It proved to be a close and exciting competition as less than one point separated the top three teams when all was said and done.

Alexandrovskaya (17) and Windsor (21), who stood in after the short program, finished first in the long and overall (113.59 / 173.85) after their entertaining free skate to music from The Mask. The 2017 Tallinn Trophy gold medalists were solid other than a fall on the side-by-side triple Salchows. Their routine featured good lifts, a level four triple twist, triple throw flip, throw triple Salchow, and side-by-side triple toe-double toe-double toes.

“Our skate was great,” said Alexandrovskaya. “A little tiring for me, but it was great. We’ve been very busy, one week there, one week here, we’re always on the plane.”

“It was a little tough, at least for me,” admitted Windsor. “There was one big mistake, but we are happy that we pushed through it and everything else was relatively ok. We are not happy, but we are not upset about our skate. We will slowly increase our training, get more consistent in practice and hopefully our confidence will build, and we’ll be able to perform a lot better in competition.”

The team, coached by Nina Mozer, Andrei Hekalo, Andrei Pachin, and Galina Pachin, has already earned an Olympic spot after finishing third at 2017 Nebelhorn earlier this season. At the moment, they just want to take things step by step and try not to think about it too much.

“Our goals for the Olympics, we’re not there not win a medal,” said Windsor. “We want to skate two of the best programs that we can, and our ultimate goal is to finish in the top twelve.”

Panfilova (14) and Rylov (16) were first after a solid short in which they earned a new personal best (60.81). The team from Perm repeated with a nearly flawless routine to music from Alice in Wonderland which featured a level three triple twist, a strong throw triple loop and throw triple flip, side-by-side double Axels, and good spins. They finished third in the long and slipped to second overall (112.20 / 173.01).

“I am satisfied with our performance,” said Panfilova. “I think we lost points on the jumps. We only do double Axel and a double-double combination. We want to add a triple jump for the next competition, which is senior Nationals.”

“I am in shock,” added her partner. “I did not expect that (a medal). All the others have triples in their program and we don’t. We are working on a triple jump, most likely it will be the Salchow.”

The team, who is coached by Valentina Tiukova and Pavel Sliusarenko, are currently working a quad twist, but it is not yet consistent enough to go in the long program. They had their international debut early in September at the JPG Latvia where they placed first.

Pavliuchenko (14) and Khodykin (18) stood in third (59.51) after the short and finished second with a new personal best (113.43) after their jazzy routine to music from the Chicago soundtrack. The team from Moscow showed a good level four triple twist, throw triple loop, and difficult lifts, however, there was a hand down on the landing of the throw triple flip and they struggled on the side-by side triple Salchows. Despite the errors, they finished second in the long with a new personal best (113.43) and third overall (172.94).

“We tried to skate, but the time difference of the six hours was tough for us,” said Khodykin. “Basically we are satisfied. I was nervous before coming here, but I had to show what we had practiced.”

“It was exciting,” said Pavliuchenko. “I had a little mistake and was not good, but still okay. Of course, we need to think over what we did, but for now, I think we did well. We have to work more to get better.”

The team, coached by Sergei Dobroskokov and Sergei Rosliakov, wanted to show what they could do as well as learn from the senior pairs in their first JGP Final.

“The Final is a good practice for us, because there are many other Russian teams, our close competitors,” said Pavliuchenko.

“I am fairly satisfied with the performance,” said Xie. “We did fine for jumps, and yes, there are some small things like turns that need to be fixed. On other than that, I feel pretty good. The crowd here is very supportive. I have to say, I was nervous during the six-minute warm up, but the crowd helped me to get over my nervousness during the performance.”

The team plans on going to the World Junior Championships and foresee some competitions before that, but are  no sure which ones yet.

“We need to practice and to fix the issues we had today,” said Xie.

The team from Beijing, coached by Zhao Hongbo, has been working hard to make their skating “look like ice dance” and are working to improve on the smoothness.

Aleksandra Boikova (15) and Dmitrii Kozlovskii (17) finished fifth in the long and overall (104.88 / 160.80). The 2017 World Junior silver medalists had a fall on their opening side-by-side triple loops and a two-footed landing on a throw triple Salchow, but landed a side-by-side triple toe-loop-triple Salchow combo and throw triple loop, and showed a strong level three triple twist.

“Our performance wasn’t very good,” admitted Boikova, “but after some mistakes, I analyzed my skating and I told myself I can do everything. We were silver medalists last year at junior worlds, so to be able to go again and medal, we first have (to go to) our nationals, for seniors and juniors. If we are the top three in juniors we will go to (Junior) Worlds.”

“I think we could have done better, but this competition was great,” added Kozlovskii. “The Japanese fans were amazing. We will keep trying to participate in the (Junior) World Championships.

Teammates Anastasia Poluianova (16) and Dmitry Sopot (19) placed sixth in the long and overall (103.19 /160.47). They struggled on their opening side-by-side jumps and only earned a level one for their triple twist, but otherwise produced a solid throw triple loop and throw triple Salchow.

“We feel good about our performance,” said Sopot. “We skated clean and did everything we planned. We skated here maybe a little better than on (Junior) Grand Prix series, but we are not happy with our scores. Maybe it’s because we are new pair and that’s why we are not given the high scores yet. We just want all at once, but it doesn’t work like that. So, we will just continue to work hard. We are not going to give up.

“Yes, the scores for components are low,” agreed Polouianova. “I think we should work on our artistry, to skate more together, to work on our skating skills.”