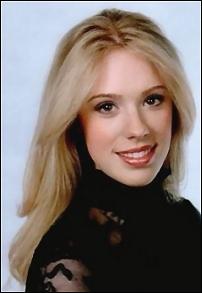 Lindsey Weber is a rising star in U.S. figure skating who trains at the Winterhurst FSC under the direction of coach Carol Heiss-Jenkins.

Lindsey Weber is a rising star in U.S. figure skating who trains at the Winterhurst FSC under the direction of coach Carol Heiss-Jenkins and Roberta Santora-Mitchell. Weber moved from the Detroit Skating Club a year ago, and currently resides in Westlake, OH.

Weber began skating at a year and a half, her Mother and Grandmother teach ice skating. As a twelve-year old, Weber qualified for the 1997 National Championships at the junior level, but serious injuries kept her out of competition for the following seasons.

Weber returned to Nationals in 2000, where she placed eighth at the junior level. Weber’s decision to give juniors another try in 2001 paid off with a bronze medal at Nationals and a trip to Italy for the Gardena Trophy, her first international competition. After sitting out last year due to injury she made a coaching change and recently won Skate Detroit. She finished seventh at the 2002 Finlandia Trophy in October – her first senior international competition this season.

Weber made her debut as a Championship Lady at the 2003 State Farm US Figure Skating Championships in Dallas. When Weber isn’t skating she enjoys, hanging out with her friends, traveling home to Detroit, dancing, and reading. Currently she’s working towards next season, developing new programs, jump combinations and, hoping to improve her national ranking.

Anonymous: How much does it cost to train at your level these days? Do you have a sponsor besides being on the Reserve team?

Mike: What is your favorite skating memory thus far?

Lindsey: Definitely winning the bronze medal at nationals in juniors at the 2001 Championships. Also this year competing as a Championship lady, that was great. My short program from nationals will always be a great memory.

Anonymous: Do you enjoy living/training in Cleveland?

Lindsey: YES! I love it here. I have the two most amazing coaches ever, (Roberta Santora-Mitchell and Carol Heiss-Jenkins) the rink here is great, the atmosphere and I have some great friends down here.

Anonymous: What are your plans off/on ice for the next few years?

Lindsey: Well I will continue training for next season I would like to get two new programs and kind of start from scratch. Off the ice I want to start my college classes next fall.

Nicole: Which of your achievements in skating has been the most rewarding for you so far?

Lindsey: Representing the US at international competitions. I love traveling and skating against people from other parts of the world.

Oscar: What do you do with your old skates and costumes? Also, who designs and makes them?

Lindsey: I usually keep all my old dresses or I let the other girls at the rink borrow them. I use my old skates to skate on our lake in the winter. As far as designing my dresses Stephanie Miller along with myself design them and Luann Williams makes the dresses.

VC: What was your most embarrassing moment in skating?

Lindsey: I would have to say at a ice show I was guest skating in this past summer. I was skating off the ice and I tripped over my toepicks and fell flat on my face, and they just left the spotlight on me!

Anonymous: Do you have any tips for landing the double Axel?

Lindsey: The double Axel was my hardest jump to learn. I think different technique works for different people. But my best advice would be to just think of staying really tight.

Brittany: What do you usually eat every day to stay healthy for skating?

Lindsey: I try to eat a balanced diet. My coach likes me to eat Salmon or chicken for dinner and have a steak once a week.

Jon: I saw you at Skate Detroit! I have two questions. 1) Was your music selection (Vanessa Mae Turandot) influenced by Sarah Hughes? 2) The triple toe/double toe-double loop combination was awesome! Was this a spur of the moment thing or did you have it planned for the free skate?

Lindsey: My long was not influenced by Sarah, I just really liked the music a lot. I actually found out she used it after I picked it. As for Skate Detroit, I think I was just having one of my best performances ever and I added that as a little bonus. Although I had worked on it in the program before.

Anonymous: What motivates you to skate?

Lindsey: MYSELF! I really truly love to skate. I know even if I couldn’t compete anymore I would still skate just because I love to be on the ice skating. It’s my favorite feeling in the world.

Paula: Congratulations on your first-place finish at 2002 Skate Detroit! Can you assess your performances for us?

Lindsey: Skate Detroit went really well for me. I was excited to be competing and I was really happy with all my performances. I think it was a good point to build on for the season.

Paula: What was your first experience competing internationally like?

Lindsey: It was a great experience! Competing against girls from other countries and just experiencing the whole situation was great. When I first went to Italy, it was a very new experience. Finland was definitely my high point of the year, I was more experienced to compete internationally. To be competing with the seniors was also a great achievement.

Paula: How would you describe your skating to someone who has never seen you skate? What are your strengths?

Lindsey: I would say I’m more of a balletic skater. My strength is definitely my overall skating. I have worked a lot to improve it and I hope it shows!!

Paula: During the four seasons that you competed at the junior level, you experienced a few injuries and setbacks. Can you describe them and give a sense of how serious they were?

Lindsey: After I was 6th at the 1997 nationals I had been experiencing back pain. I got it checked out and the doctors couldn’t find anything. After a ton of tests and a few months we found out I had a herniated disc. The reason they couldn’t find it was because they had never seen one in a kid as young as I was. I was only 12. Three doctors told me I would never skate again without surgery and they couldn’t do the surgery because I was too young. They also said I was to take a year off and work with a physical therapist. I ended up missing the 98 and 99 season. I was determined to skate again and with tons of strengthening I did! I still have pain while I’m training but I have gotten used to it and with my therapist at the rink now I’m able to keep it to a minimum I just have to really watch and be smart about my training and not over do it.

Paula: At what age did you start skating, and why? If you can remember, describe your first time on the ice.

Lindsey: I started skating at a year and a half. My mom taught skating and I hated staying with baby-sitters so she would just stick me on the ice and she could teach.

Paula: What is a typical day in the life of Lindsey Weber?

Paula: How much time per week do you spend on the ice, and what kinds of off-ice training do you do?

Lindsey: I skate on ice three hours a day. I spend three days a week doing off ice training, and one doing yogilates. I also have a certain set of exercises that I do everyday to keep my back in shape which usually takes about an hour.

Paula: How often do you get new skates?

Lindsey: I get new skates every eight months usually. Sometimes more, sometimes less – it just depends how that certain pair of boots are holding up. My last pair lasted over a year!

Paula: Could you describe your support system (parents, coaches, choreographers) for us?

Lindsey: I have the greatest support system! My parents are so supportive of my skating. My mom is always there for me. My coaches Roberta and Carol are so great. I know I can trust them with anything. I really couldn’t ask for a better support system.

Paula: What about role models in general? Whom do you admire, and why?

Lindsey: I admire Tara and Kurt Browning. I think their personalities really make them special, and they are both great skaters technically and artistically. I also admire Michelle Kwan, because she has stuck around a long time and she keeps getting better.

Paula: Many people think Midwesterns has the toughest senior ladies field of any Sectional. Do you agree?

Lindsey: I do, there are a lot of talented ladies out of that section. Although I think when you get to that level all the sections are hard!

Paula: What are your long-term goals? What do you hope to accomplish in the sport and outside of it?

Lindsey: My long term goal is to make the world and Olympic team. I hope that when I finish skating people will remember me for not only being a beautiful skater, but also for being a nice person. Outside of the sport I plan to go to college, and I haven’t quite decided what I want to do yet!

Paula: What would you consider your most memorable performance and why?

Lindsey: My short program at nationals in Boston. I think that was the best I had ever skated at that point. Also this year my performances at Skate Detroit and Finlandia Trophy.

Paula: Do you have a favorite program? If so, can you share why it is
special to you?

Lindsey: My favorite program is my short this year.

Paula: What is your favorite jump, and why? What about your least favorite?

Lindsey: My favorite jump is the triple flip. I also really like triple toes. My least favorite would have to be the loop.

Paula: At what age did you land your first triple jump?

Lindsey: I was ten and I landed a triple Salchow.

Paula: You can already perform all of the difficult jumps necessary for success at the senior level, including the triple flip and lutz. What’s next? Any plans for a triple-triple combination?

Lindsey: I have been working on triple toe, triple toes. I would like to have it in my program this season.

Paula: Away from the ice, what do you like to do?

Paula: Academically, what is your favorite school subject and why? And what about your least favorite?

Lindsey: My favorite subject is science; I think it’s very interesting I loved Biology and Chemistry. My least favorite would be English.

Paula: What kind of music do you listen to? Do you pick your own skating music?

Lindsey: I listen to dance music and pop. I like Britney Spears and all the guy and girl groups! I do pick my own skating music. My mom and I listen to classical for hours trying to find the perfect piece.

Paula: Thank you for taking the time to answer questions from your fans! We look forward to watching you skate at the senior level next season and wish you all the best! Is there anything else you would like to tell your fans?

Lindsey: I would like to thank them all for all their support this year! Thank you to all the fans who support us skaters. It means a lot! — Lindsey Weber