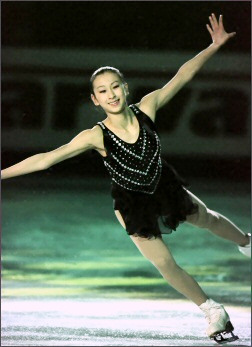 For Japan’s Mai Asada, figure skating wasn’t her first artistic endeavor. It was ballet, a natural beginning for someone whose name means “dancer” in Japanese. She started when she was still in kindergarten and still practices the art today, although she no longer has time for ballet classes. Instead, she practices the discipline by herself as part of her relaxation and occasionally watches a ballet at the theatre. Asada performed in many recitals before she discovered the art of figure skating and transferred her balletic talents from the floor to the rink. Her balletic background is evident in her style and grace on the ice and she often employs traditional balletic moves in her programs.

But one day when she was eight or nine, she decided to go with some of her friends to watch some high-level skaters practice at an ice rink. Skating intrigued her, so she started lessons. By the time she was eleven, she had learned all of her double jumps and landed her first triple, a triple toeloop. Since then she has progressed to the point where she landed her first triple Axel in competition two years ago. But she hasn’t started working on a quad jump as of yet. Asada said she wants ‘to improve every aspect of my skating’ for next season and hopes to include more difficult combination jumps in her programs. Last season, she used a triple lutz-double toe in the short and a triple lutz-triple toe and triple flip-double toe in the long.

Asada trains for three hours a day, five days a week, then spends all day Saturday and Sunday training at the rink, either on ice or off. Her coaches are Machiko Yamada and Higuchi Mihoko. She trains with several other highly talented skaters including Yoshie Onda and Yukari Nakano. “It’s a good influence on me to train with the other girls,” she stated. “It helps me to jump big. I get great joy from landing my jumps, especially when I’m successful at competitions.” She also trains with her sister, Mao, who is also competitive at the national level in Japan. “One of my dreams is to go to the 2010 Olympics in Vancouver with my sister,” Asada said. “Then I’d like to be a professional skater.”

The 15-year old has been successful at the World Junior Figure Skating Championships for the last two years, finishing fourth in the ladies event each time. “I plan to continue skating in juniors for next season,” she said. “I’d like to get a medal at Junior Worlds.” She finished sixth at Japanese Nationals last year in seniors and also won a gold at Skate Slovakia and a silver at the SBC Cup before placing fourth at the ISU Junior Grand Prix Final.

In concert with her ballet background, Asada most enjoys skating to soft, classical music. This season, she skated to Spanish Dance No. 1 by Manuel de Falla for the short program, Romance by Beethoven for the long and What I Am To You for exhibitions. Yamada selects the music for Asada’s programs, each of which is new each year. Off ice, Asada listens to American pop music, especially Mariah Carey and Whitney Houston.

Asada is currently in ninth grade. Her favorite subjects are art and gymnastics. “I like drawing landscapes,” she added. Other than ballet, her off ice pursuits include hanging out with her friends, collecting skating pins and reading fantasy novels. “I’m a big fan of Harry Potter and I liked the first part of the Lord of the Rings,” she said.