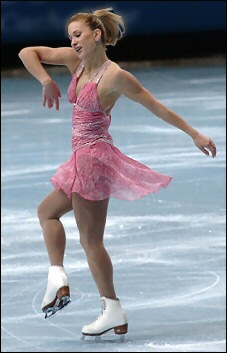 The question that resonated throughout the ladies short program tonight was, ‘Does anybody really want to win this thing?’.

Only three ladies in the field of twenty-six skated a technically clean performance, and of those, only one is in the top three.

One by one, the top skaters popped, fell on, or stepped out of a jump, and in the end, Canada’s Joannie Rochette was standing alone at the top of the heap, albeit with a very small lead.

Rochette started her sultry program to Jimi Hendrix’s Little Wing with a triple flip that she had to step out of before tacking on a double toe, which wasn’t counted as her required combination. After the mistake however, Rochette skated cleanly and surely, showcasing her willowy back and balletic fingers as she ticked off each successive element.

The four-time Canadian champ landed a triple lutz out of footwork, an element that she missed at her country’s championships three weeks ago, as well as a nice double Axel.

“I missed a lot of training between Nationals and here,” admitted the 21-year-old. “I was sick and I had to rebuild my confidence after Nationals.”

Overall, Rochette scored 56.60 points and takes a little more than a one point lead into the free skate on Saturday afternoon.

“Despite making a costly mistake on my first jump, I was still able to enjoy my performance,” added Rochette. “It was my goal to do it (triple Lutz) tonight and I held the performance together in spite of the mistake.”

USA’s Emily Hughes also had problems with the same element in the opening of her short to Carmen by Bizet. The U.S. silver medalist fell on her opening triple flip, of what was planned to be her combination jump, but later nailed her triple Lutz and added a double toe to the back, earning precious points.

“My goal tonight was to compete for my personal best,” revealed the 18-year-old. “It didn’t happen and I am ready to move on [to the free skate].”

The high school senior completed each of the rest of her required elements to skate away with 55.34 points, edging out senior international new-comer Aki Sawada from Japan, for second place.

Sawada, sixth at her first senior national championships in December, was one of the three ladies who skated cleanly, landing a triple lutz-double toe loop combination to begin her program.

Before her program started, Mie Hamada, Sawada’s coach, gave her a playful slap on the forehead which is the duo’s ritual for good luck. It must have worked as Sawada earned a new personal best score of 55.13 points with her routine to Blues in the Night. After landing the combination jump, the 2005-06 JGP Final silver medalist executed a clean triple flip and required double Axel to place first in technical components in this portion of the competition.

“Because of the Japanese team members cheering, I was able to do very well,” said a giggly Sawada. “So I am very happy.”

Sawada has set a personal goal to earn a score of 107 points in the free skate. Hamada says that she will be on-hand to provide the (slap) motivation.

“I was very happy to achieve a new personal best,” continued Sawada, regarding her performance. “It didn’t matter to me that I skated last. I didn’t think about it being anything special. The competition is late, but this doesn’t bother me at all because I’m practicing until 10:30 [PM].”

In fourth place, after a fall on her underrotated triple flip, was USA’s Alissa Czisny.

Fresh off earning her first medal (bronze) at the US Championships, Czisny was the class of the field in the component scores. Czisny almost made up for the jump deduction in her routine to Jesse Cook’s Prelude & Quadukka-l-Mayyas with high grades of execution on her fast and centered spins, good footwork, and a nice spiral sequence. The 19-year-old earned a total of 54.64 points, less than two points behind the leader, Rochette.

“I think that it was a pretty good performance,” said Czisny. “The flip wasn’t good, but I fought back and worked it out.”

Another of the ladies in the small pool of “clean” skaters tonight was Yan Liu of China, who stands in fifth close behind Czisny.

A very lyrical and emotional skater, Liu cleanly executed a triple lutz-double toe loop combination, as well as a triple loop and the required double Axel. Not known as a top tier skater by the casual fan, Liu presents herself as a taller version of her countrywoman Lu Chen.

Skating to Song of Boundless Traveling, the two-time and current Chinese champion displayed a lyrical quality that suited the music well and that showcased her limber body in her spins and spiral sequence. Within striking distance of the podium, Liu earned a new personal best of 53.34 points in this phase of the competition.

The disappointment of the competition had to be U.S. Champion Kimberly Meissner, who not only fell on her opening triple lutz, but also received negative grades of execution on her wobbly triple flip. The 17-year-old, who is known for her rock-solid jumps rather than her component scores, found herself in a shocking sixth place.

Skating to Snow Storm by Sviridov, Meissner seemed disconnected from her program and didn’t seem to present a clear artistic vision to the audience. Her total score of 52.49 sets her up well to move up in the standings should she have a clean skate on Saturday night.

“I just have to work on things tomorrow,” said Meissner. “My long program is my best!”

The other disappointment in the competition was Japan’s Fumie Suguri, who has not been competing well all season. The four-time Japanese champion was left off the team heading for the World Championships in her home country after placing fourth at her country’s nationals in December. The 26-year-old lacked the attack that she normally brings to the competition ice, falling on both her triple jump attempts, and placing twelfth overall.

The competition continues Friday with the Free Dance and the Men’s Long Program.