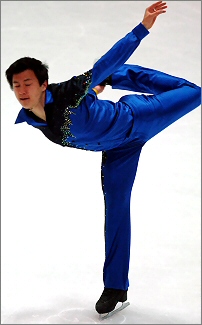 The second day of the 2007 World Junior Figure Skating Championships continued with the Men’s Short Program in which there were a total of 45 skaters competing from 36 different countries.

The 45 skaters were divided into two groups and a draw was made according to the ISU World Standings.

The required elements in the Junior Men Short Program for the 2006-07 season are: a triple or double flip out of footwork, change foot sit spin and flying camel spin.

In his third appearance at Junior Worlds, Patrick Chan of Canada skated his first clean short program of the season, placing first with a new personal best of 64.10.

Performing to Gourmet Valse Tatare from the Hannibal soundtrack, Chan displayed power and exceptional speed in executing the intricate choreography of his routine. Of his three jumps elements, only the triple Lutz-triple toe loop combination received a – GOE (-0.14), while his triple flip and double Axel both received + GOEs.

Despite a minor problem centering his flying camel spin, the 16-year-old exhibited excellent positions and speed in his sit-change-sit spin and combination spins and both level 3 footwork sequences showed his beautiful interpretation of the music.

“I was focused every step of the way and tried to visualize every jump,” offered Chan. “Lutz-toeloop, flip, Axel – I visualized all of them and that obviously gave me this good result.”

Chan said that he trained the entire season for this event and that there is no excuse or reason for failure.

“I am coming into this competition much more experienced,” he said. “I can remember my first Junior Worlds, looking up at the other guys, and now I have been here three years and I feel like them.”

The Canadian feels that competing on the Senior Grand Prix circuit helped him immensely.

“At Paris (Trophee Eric Bompard), I was sharing the ice with Brian Joubert and at NHK Trophy with Nobunari Oda and Daisuke Takahashi – all of whom are the best in the world. I didn’t feel out of place. So coming here I feel that I am part of the top of the Junior Men.”

Jinlin Guan of China, who skated a solid program and was the only competitor who didn’t receive any – GOEs on his elements, placed second with a new personal best of 61.67.

Performing to music from the Korean movie soundtrack Sorry, I Love You, Guan opened with a triple Lutz-triple toe loop which had excellent height and tight air position, followed by footwork into a triple flip. While his flying camel appeared a bit slow, the positions were excellent. The 2006 JGP Spin of Norway silver medalist also displayed very nice musical interpretation in both footwork sequences which were graded a level 3.

Despite being nervous, Guan felt that he gave a good performance.

“I felt that some other skaters had skated better than me, so I didn’t expect anything in this competition,” confessed Guan. “I hope to be relaxed tomorrow in the Free skating and to achieve another personal best.”

Guan, who was fifth at this event two years ago, acknowledged that his training hasn’t been very good.

“I felt things were going downhill during these [last] two years,” he explained, “but things changed from the beginning of this year. I now feel more confidence in every element.”

Takahito Mura of Japan started with a light and easy triple Axel-triple toe loop combination in his routine to Art on Ice by Edvin Marton, followed by a triple flip from footwork and a double Axel – all of which had beautiful air position. The 2006 JGP Budapest silver medalist also displayed a lovely layover position in his flying camel spin, and took command of the ice with intricate footwork which appeared to flow right out of the music.

The 16-year-old earned a new personal best of 61.16 for a third place finish.

“Last year, I participated in this competition and came in fifth,” relayed Mura. “This year I wanted to improve myself. However I felt very nervous, so I am happy to have a good basis for the Free Program. I worked on my personal attitude and now I feel very confident.”

Mura, who was the 40th competitor to skate, admitted to being astonished after he saw Chan’s score.

“That made me very tight and I got very nervous,” he admitted. “But in my performance, I was able to land the triple Axel and I didn’t make any major mistakes. Overall, I am very happy.”

Canada’s Kevin Reynolds, who placed fourth with a new personal best of 59.52, displayed a new level of maturity in his skating and understanding of choreography in his program to Canaro en Paris, Corteo, and 9 de Julio.

His hard work in correcting his technique on the triple Lutz was rewarded with + GOEs on his tripe Lutz-triple toe loop combination, as well his triple flip and double Axel. The 2006-07 JGP Final bronze medalist also displayed fast spins which had good positions – especially his closing combination spin which was arguably the fastest of the competition. Both footwork sequences, which expressed the movement and feel of the music, were awarded a level 3.

“My goal in the short was to get a personal best and I am very glad that I made that,” said Reynolds. “We worked a lot on my presentation to make it look more mature.”

Sergei Voronov of Russia interpreted the ebb and flow of Rachmaninov’s Piano Concerto No. 2 very well. The current Junior World silver medalist managed to save his triple flip from footwork that had a lean in the air, but then two-footed the landing of his second jump in a triple Axel-triple toe loop combination.

Nevertheless, the 19-year-old displayed very good interpretation of the music in his footwork, despite receiving a level 2 for both sequences, and was awarded a level four on two spins, placing fifth with a new personal best of 49.59 points.

“I fought for it,” said Voronov, “and when you fight for it, things fall into place. I can’t say it was great, but it was ok considering that I’m bothered by some injuries and not in my peak form right now.”

“It’s too bad that I made a mistake in the [jump] combination,” the Russian continued, “but overall it was more or less clean and it’s good to put out a program like that at Junior Worlds.”

USA’s Stephen Carriere entertained the crowd with his Stray Cat routine, which exhibited a marked change of pace for the competition. The audience thoroughly enjoyed his light interpretation of the music in which he displayed good footwork and excellent spins.

Despite a flawed landing on a triple flip, Carriere otherwise displayed excellent air position in his jumps, landing a clean triple Lutz-triple toeloop combination and double Axel, and placed sixth with 57.71 points.

“Actually the flip has given me trouble all year in the short and this was the best that I did in this season,” admitted the 2006-07 JGP Final Champion. “Of course it wasn’t exactly what I wanted to do. Maybe I just wasn’t thinking.”

Carriere stated that he just takes one competition at a time.

“After the JGP Finals, I went to the US Nationals and had my [senior] debut there,” he said. “I took that as one competition and [now] I am taking Junior Worlds as one.”

Teammate Brandon Mroz stood in seventh after the short program, followed by Russia’s Artem Borodulin. The two skaters are currently tied in points (57.21), however, Mroz had the highest technical score which determined the placement.

Skaters which placed fourth through eighth are less than four points away from a medal.

The top 24 skaters from the short program will advance to the Free Program.