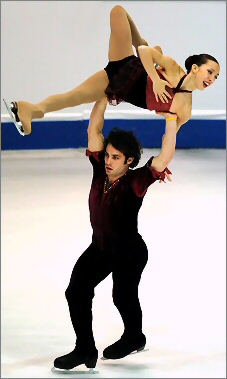 In their first appearance as a team at this event, USA’s Keauna McLaughlin and Rockne Brubaker were the gold medal winners in the pairs discipline.

The audience sat entranced as they were drawn into the emotional performance of McLaughlin and Brubaker’s routine to Romeo and Juliet. The team opened their dramatic program with a high flying triple twist followed by a beautiful throw triple Salchow, a level 4 hip star lift that transitioned seamlessly into a carry lift, and good side-by-side double Axels. The 2006-07 Junior Grand Prix (JGP) Final Champions then executed a level 4 pair combination spin, bringing the crowd into the romantic music ‘A Time For Us’, and level 3 spirals which had excellent speed and nice matching positions.

The overnight leaders also produced a throw double loop, a side-by-side double Lutz-double flip sequence, and side-by-side spins which showed lovely matching positions. Their level three straight line footwork sequence flowed from the music into an level 4 Axel lasso lift with smooth turns by Brubaker and gorgeous air position by McLaughlin. At the conclusion of the program, the joy of the performance was evident in their embrace and on their faces.

“I was really happy with our performance,” said McLaughlin. “It’s definitely the best performance we have done all year. I didn’t even care what [place] we got. I knew we skated our best, and we worked so hard to get here.”

Brubaker agreed. “It was just really good to have that skate at Junior Worlds,” he said. “We put everything out there. We knew that we did all that we could. The rest was in the judges’ hands.”

The new team didn’t take the ice together until the spring of last year during tryouts.

“All I remember from that was that everything was really easy,” said Brubaker. “[We] just kind of clicked. We were doing lifts across the ice right away. Everything from the beginning felt really comfortable.”

“The reason I love pairs is because I always have someone by my side,” added McLaughlin. “My favorite thing is being thrown up in the air.”

Brubaker enjoys the way a pairs team can tell a story. “One of my favorite teams was [Ekaterina] Gordeeva and [Sergei] Grinkov,” he offered. “Watching them, they always told a story. I like going out there and being able to do the same thing.”

The team will move up to the senior level as Brubaker, who turns 21 in June, will exceed the age limit for ISU junior level competitions. McLaughlin, who turns 15 in September, will be too young to compete at the senior level for ISU senior championship events, but can take part in the ISU Grand Prix of Figure Skating.

Krasilnikova (15) and Bezmaternikh (19) opened their Spartacus routine with side-by-side double Lutzes, a throw triple Salchow, and a high triple twist. The 2007 Russian Junior Champions displayed beautiful matching lines in their level four spiral sequence, which was followed by a double Axel-double Axel sequence, however Krasilnikova two-footed the second jump. The team also received a level four on their backward-outside death spiral and pair combination spin.

The current World Junior bronze medalists placed second in the long program with 92.46 points, and with a total of 145.47, placed third overall to win their second consecutive bronze.

“Due to some problems (referring to his partner being sick with a cold and a fever), we made some mistakes in the short program and in the free skating,” said Bezmaternikh. “That is why we ended up in third place. But overall, these are our second Junior World Championships and the second time we are in third place, so that is not a bad result.”

“I am happy with the way we’ve skated,” said Krasilnikova. “We had a few errors in our free skating, but overall it was quite good.”

Bezmaternikh added that the location (Oberstdorf) of the event was nice. “The surrounding mountains are beautiful and the whole nature setting is beautiful. It all gives you a good mood and it raises the spirit for the competition.”

Performing a light-hearted routine to music from the Amélie soundtrack, teammates Bazarova (14) and Larionov (20) opened with a triple twist from a pendulum entrance, followed by side-by-side double Axels which were a bit far apart. Larionov showed command of lifts with a step overhead that had two changes of position by Bazarova and two changes of rotation direction by Larionov.

The 2007 Russian Junior silver medalists also produced level four side-by-side combination spins which showed great unison and matching positions, and despite their size difference, produced a level three spiral sequence which displayed very nice matching lines and extension. Bazarova had to put her free foot down on the landing of a throw triple Salchow, but recovered for the fast death spiral with a change of hand and flip-out exit and a level 3 hip lift with changes of position.

The Russians placed third in the long with a new personal best of 92.25, but were able to maintain second overall with 147.31 points.

Both skaters were happy with their performance. “We did not expect to be in the top three,” confessed Bazarova. “Coming in here, our aim was to be in the top six, and now we ended up in second place.”

“This competition was at a very high level,” added Larionov, “and there were many strong couples, especially the ones in first to third place. We really liked this competition. We thought the organization was very good. Everything was very nice here. Our coach was also pleased with our performances. We were skating for ourselves.”

Both Russian teams will still be eligible for junior competitions next season.

USA’s Bridget Namiotka (17) and John Coughlin (21) told a romantic story with their program to music form the Pearl Harbor soundtrack and Freedom by Michael W. Smith, yet exhibited power and speed throughout. Highlights of the program included their level four one-armed hip lift and level three Axel lasso lift that changed to a carry and then rotated again. The JGP Spin of Norway silver medalists also produced good spins which showed lovely positions and very good speed.

They placed fourth in the long with a new personal best of 90.63 and were fourth overall with 141.39 points.

Jiaqi Li (16) and Jiankun Xu (20) of China, who stood in 12th after the short, placed fifth in the long with 79.94 and moved up to 10th place overall. Their routine featured a huge throw triple loop, a throw triple toe loop, and a lateral twist which rival those of the senior Chinese teams.

Amanda Velenosi (14) and Mark Fernandez (18) of Canada placed sixth in the long and overall. The team produced a strong performance to music from the Lawrence of Arabia soundtrack which featured perfectly synchronized side-by-side double flips, a double twist, and a throw double Salchow.

USA’s Kendra Moyle (16) and Andy Seitz (21) placed seventh in the long and were fifth overall. The 2006 World Junior silver medalists produced a good throw triple Salchow, side-by-side double Salchows, and a double twist. However, the second jump of a planned double Axel-double Axel sequence didn’t count as the jumps were not considered to be in a sequence.

Maria Sergejeva (14) and Ilja Glebov (19) of Estonia, who stood in seventh after the short, placed 10th in the long, but maintained seventh place overall with 121.32 points.

The event continues Thursday with the Original Dance and the Men’s Free Skate.