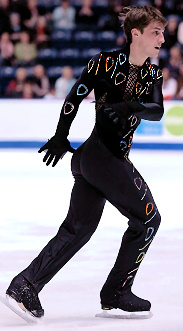 Brian Joubert, 23, leads the men after his short program to All for You by Sebastien Damiani.

Joubert opened his routine to All for You by Sebastien Damiani with a quadruple toeloop-double toeloop combination, an easy triple Lutz, and a triple Axel.

“I was a little nervous here, but I also felt confident because my practices have been going well,” said the 23-year-old.”

The current World champion also produced a good level three combination spin and straightline footwork which had the crowd clapping.

Overall, Joubert was pleased with his performance.

“I really enjoy skating it,” he said. “My score wasn’t bad and I hope to get even better scores [in the future].”

Teammate Ponsero put out a good routine to a remix of Otonal by Maxime Rodriguez, landing a very high triple Axel and a good triple Salchow, but he stepped out of the first jump on his quadruple toeloop-double toeloop combination.

Despite the mistake, the French silver medalist delivered good spins that had great speed, position, and extensions.

It wasn’t a jump night for Canada’s Jeff Buttle. The 25-year-old had a shaky landing on his triple flip-triple toeloop combination, pitched forward a bit on his triple Axel, and then fell on the crossovers setting up for his triple Lutz which he missed.

Teammate Christopher Mabee, despite putting his hands down on a triple Axel, delivered a very good triple flip-triple toeloop combination and triple Lutz. He is currently in a very close fourth with 66.50 points.

Right on his heels is Belgium’s Kevin Van Der Perren with 66.11 points. The reigning European bronze medalist produced a triple Axel and a triple Lutz, but fell on his quadruple toeloop-triple toeloop combination.

Vaughn Chipeur of Canada is currently in sixth place, followed by Pavel Kaska of the Czech Republic.