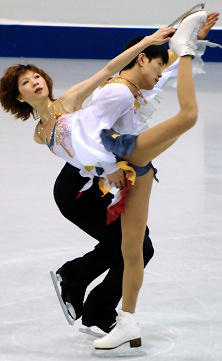 The Chinese lead the pairs with Dan Zhang and Hao Zhang in the front, followed by teammates Qing Pang and Jian Tong. USA’s Rena Inoue and John Baldwin are currently in third place.

“Overall we are quite pleased with today’s performance,” said Dan Zhang, “but we were a little bit tired. We did a lot of competitions this season and so we felt tired in the second half of the program.”

“Tomorrow’s free skating will be a challenge for us,” added Hao Zhang. “As Dan said, we’re a little tired from our previous competitions plus I also changed my boots just two weeks ago and I’m not yet so comfortable skating with them.”

Pang and Tong, both 28, earned a new personal best of 67.70 (39.21/28.49) points for their routine to O Doux Printemps d’Autrefois by Jules Massenet. Their quixotic program, in which all elements received positive Grades of Execution (GOE), featured solid side-by-side triple toeloops, an excellent throw triple loop, and a very good level 4 lift with a one-armed dismount.

“This was an okay performance,” said Tong. “It went rather smoothly. I had back pain last night after practice so we didn’t come this morning (to practice). Our goal is to improve with each competition that we are doing.”

“I thought we skated really well,” said Inoue. “I’m very satisfied with our performance. For a couple of elements we didn’t get the level we wanted, so hopefully we can figure out why and what we did wrong. Hopefully by tomorrow for the long program we can fix it.”

USA’s Brooke Castile (21) and Benjamin Okolski (23) are currently fourth with 56.44 (32.13/24.31) points. The U.S. bronze medalist opened with a good pair combination spin, triple twist, and throw triple Salchow, but then Castile singled her jump on the side-by-side double Axels. She later had a bobble going into the side-by-side combination spin, which was subsequently graded a level 2.

“I’m not too happy,” admitted Castile.”One of my big goals for this competition was to do a good short.”

“I just didn’t do it,” she continued, when asked about the popped Axel. “And you can’t do that in the short program.”

Jessica Miller (26) and Ian Moram (28) of Canada are currently in fifth with a new personal best of 54.88 (32.34/22.54) points. The 2007 Cup of China bronze medalists skated a fairly solid routine to Wayfering Pilgrim by Roy Buchanan, which included side-by-side double Axels, a throw triple loop, and a very good lift.

The Canadians had fun and felt relaxed throughout the program. “The best part for me was to be able to think between the elements,” said Miller. “We were going for a personal best,” added Moram, “but I didn’t expect it to be that high, and I’m really excited about that.”

The team plans to do a throw quadruple Salchow in the long. “It would be very weird to do it without it,” said Miller. “It’s a mental thing, that’s what it all boils down to on the quad.”

USA’s Tiffany Vise and Derek Trent are in eighth place (45.82 points) after making costly mistakes. Trent fell on a triple toeloop and the team fell out of their death spiral when Trent put his hand down on the ice to keep from losing his balance.

“It was not a good skate,” noted Trent. “It was messy, it was rushed. The rink was bigger and we were trying to fill it out and got behind the music. I don’t think nerves had anything to do with it. My toeloop hasn’t been good. I went for it and I missed it. The death spiral is a good element for us, so that was just a stupid mistake. It happens. We’re just going for a good long tomorrow, that’s all we can do.”

Vise (22) and Trent (27) also plan to do a throw quadruple Salchow in the Free Skate.

China’s Jiaqi Li and Jiankun Xu are currently in sixth with 53.26 points.